PAGES FROM THE PAST: 200th anniversary banquet 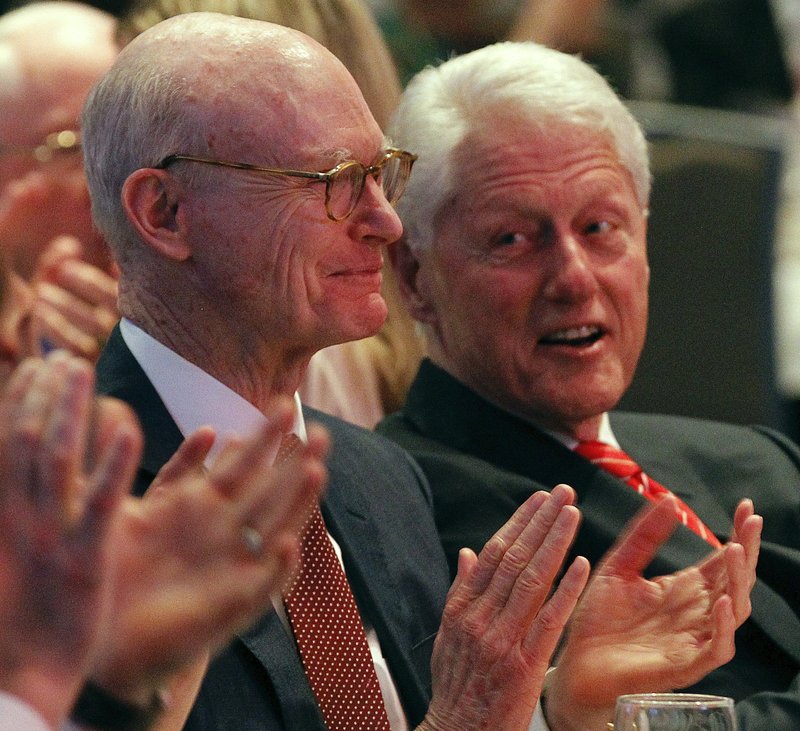 When Russian President Vladimir Putin hacked the Democratic Party's computer system in 2016 and bombarded people with sensational, fake stories on social media, his real goal "was to destroy the faith of voters in whether what they were reading was true," former President Bill Clinton said Thursday night.

"Their real goal is to break the conviction that we can know and we can act on what we know and we can predict the consequences of acting on what we know," said Clinton, speaking to a crowd of about 900 people at the 200th birthday celebration of the Arkansas Gazette at the Statehouse Convention Center in Little Rock.

Knowledge is essential to freedom, he told the crowd.

"Technology and the movement toward authoritarianism all over the world are driving us to the point where ordinary people may find it hard to tell fact from fiction or truth from a bald-faced lie," he said. "If that happens, then it will be impossible to sustain meaningful democratic government."

Clinton said he was 11 years old when Little Rock Central High was desegregated in 1957. The Gazette won two Pulitzer Prizes -- one for public service with its coverage of the crisis and one for editorials in favor of desegregation.

The legacy of the Arkansas Gazette and the Arkansas Democrat-Gazette is to provide readers with the facts that they need to know, said Clinton.

"We need to know things and we need to be able to have discussions, even arguments, with our neighbors based on the same set of facts," he said.

But the polarized political environment and fake stories on social media have made it difficult for people to tell fact from fiction, said Clinton.

That needs to change, he said.

"We need to think again," he said. "We need to feel again. We need to look at people and see them as three-dimensional human beings, not cardboard cutouts."

Clinton said he read six newspapers a day when he was a young staffer for U.S. Sen. J. William Fulbright in the 1960s.

Three of those papers were editorially left of center, and three were right of center, he said.

Although some of those newspapers emphasized different things, all six newspapers provided the same basic set of facts.

"I think that's what we need to look for again, and then we need to be able to trust people with that mission."

During most of his time as governor, Clinton recalled, the Arkansas Democrat wrote that he was doing too much and the Arkansas Gazette said he wasn't doing enough.

The Gazette changed considerably in 1986. That was the year the Gannett Co. purchased the newspaper from the Patterson family. Gannett immediately began running color photos on the front page and shifted its focus toward more feature stories.

"I could tell everybody I knew who worked for the Gazette was miserable and disappointed about what happened under the previous ownership," said Clinton, referring to Gannett.

Clinton said the Democrat-Gazette is a much better newspaper than it would have been if WEHCO Media had lost the state newspaper war.

"Thank God you didn't lose the newspaper war to Gannett," said Clinton, adding that movie reviews might be on the front page if Gannett were the current owner.

Gannett closed the Gazette and Walter Hussman Jr. purchased its assets, subscription list and name. The first issue of the Arkansas Democrat-Gazette was published the next day, Oct. 19, 1991.

Hussman, who is publisher and chairman of the board of WEHCO, briefly outlined the history of the Arkansas Gazette.

Hussman said William Woodruff was 24 years old when he came to the Arkansas Territory in 1819 and published the first issue of the Gazette. Woodruff survived a shooting in his office in 1828 and two other editors -- one from the Gazette and one from the Democrat -- fought a duel in the streets of Little Rock in 1878.

Hussman said J.N. Heiskell was the driving force being the Gazette in the 20th century. His family purchased it in 1902, and he remained editor in chief until he was 100 years old.

"Ned Heiskell probably never imagined the acrimonious reaction by so many readers to his editorial stand urging one of the great American principles, which was the rule of law," said Hussman, referring to the newspaper's stand in favor of desegregation.

"Arkansans can be proud of a tradition of good journalism in Arkansas," said Hussman. "And it was the Arkansas Gazette that set that standard. And so we are in debt to a lot of rugged men and women whose calling and passion was great journalism. Tonight, we celebrate them and their newspaper as we embark on a third century of newspaper publishing in Arkansas."