On Feb. 22, 1949, four years after the end of World War II, more than 5,134 sets of remains of American servicemen who had been buried in cemeteries in the Pacific Islands were returned to the United States, including those of 79 Arkansans.

Over the ensuing weeks, thousands of grieving Americans had the grim comfort of burying those loved ones. Among them were the family and friends of Carrick White Heiskell.

Born in Little Rock in 1917, he was the son of John Netherland Heiskell, editor of the Arkansas Gazette. Carrick was named after his Civil War Southern ancestor, Col. Carrick White Heiskell of Tennessee, and because he was born into a wealthy publishing family, he had been on a fast track to success. Heiskells were prominent in the publishing business in the 19th century in Tennessee and during the 20th century in Arkansas. 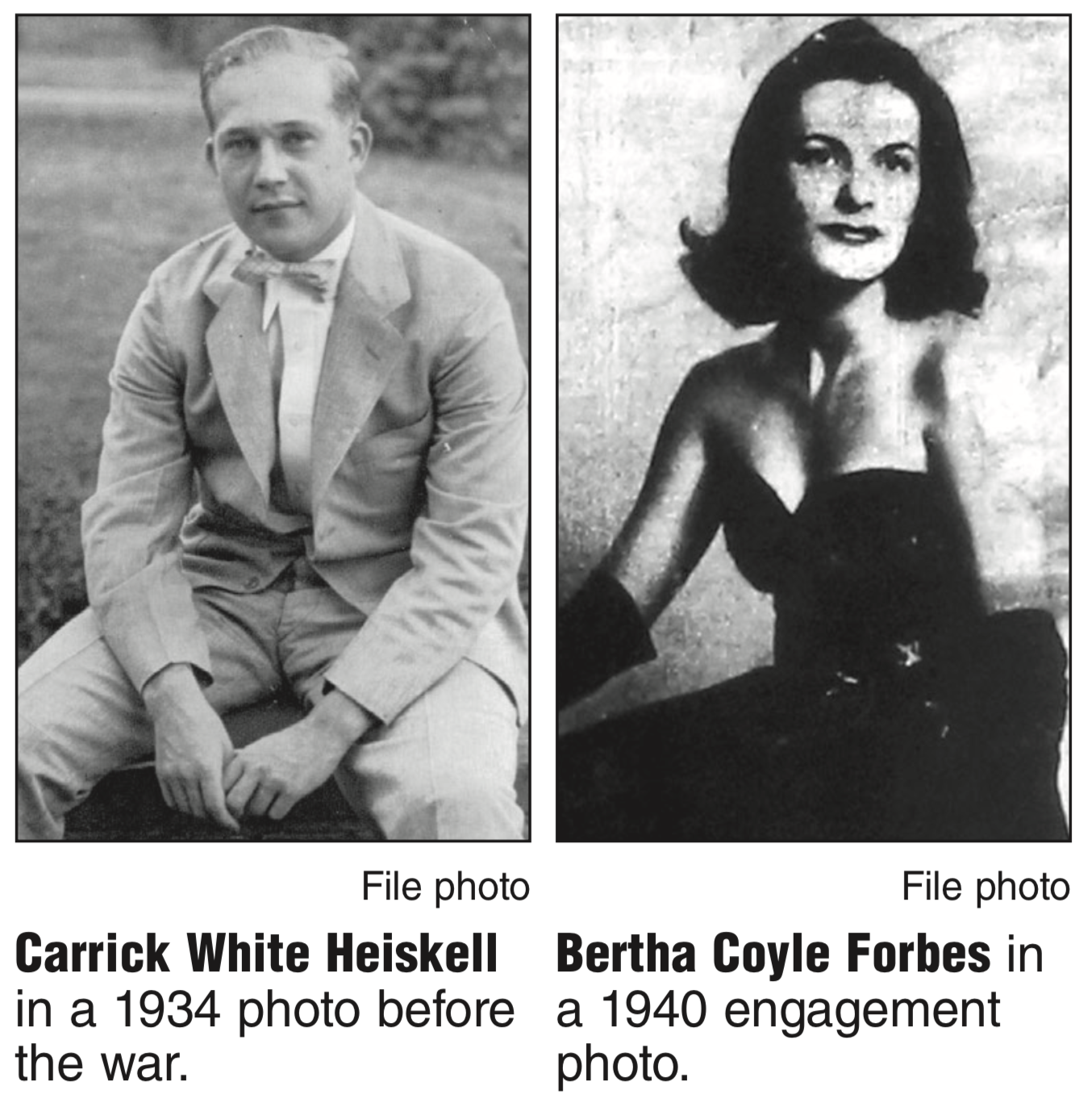 Carrick's father even served a few days in the U.S. Senate as a seat-warmer after Sen. Jeff Davis of Arkansas died in 1913. Carrick's mother, Wilhelmina, was a member of the George Mann family, and her father, a famous architect, had designed the state Capitol. He had two sisters, Elizabeth and Louise. His older brother, John N. Jr., lived at a boarding school for disabled children, The Stewart School in Swarthmore, Pa.

Carrick attended Rightsell School in Little Rock and Saint Mark's College Preparatory School in Massachusetts, where he was an outstanding student. The fall of 1936 found him at Harvard University majoring in journalism and government. He was a classmate of John F. Kennedy, and both were members of the Hasty Pudding Institute of 1770.

After graduation in the spring of 1940, Carrick returned to Little Rock and joined the Gazette staff as a city reporter. That September, he married Bertha Forbes, whose father was an engineer for the Maharaja of Mysore in India. The strikingly beautiful young woman and her husband, who looked like a movie star, radiated health and warmth in many photos in the social section of the 1941 Gazette.

Carrick covered news at the Capitol during the 1941 legislative session. That summer he was promoted to assistant city editor, and he learned to fly a small private plane.

Then he volunteered to report on the largest military maneuvers conducted in this country since the Civil War. Two opposing Army groups trained in a running battle across southern Arkansas and northern Louisiana. The drill included a massive number of troops, tanks and air assets. Though the nation was still officially neutral, the U.S. military was mobilizing for joining the war in Europe.

For several months Carrick wore an Army uniform and was "embedded" with the troops. As part of his reporting, he took a flight in an Army dive bomber, which he described in great detail in the Gazette.

That spring he earned his wings in flight school at Waco, Texas, and underwent more training at Memphis. At Salt Lake City, he learned to fly a C-46, the largest twin-engine plane in the world at the time.

He was a prolific writer and exchanged letters frequently with his father and family while in training. His father on occasion wrote about the increased scarcity of newsprint in wartime and of the exodus of so many of his young reporters as they left for military service. His father's letters convey pride in his son's service, and Carrick's letters are full of confidence in the job he was doing for his country.

In April 1943, his brother, John Jr., died at The Stewart School and was buried in the family plot at Little Rock's Mount Holly Cemetery. The school proprietress, Gertrude Stewart, would later write to J.N. Heiskell that she thought John's death "a great blessing for him." In a letter to a friend, J.N. Heiskell wrote, "John had nothing to live for and the marvel of those near him was that he had lived so long, but his passing was a shock and a grief to us."

In late summer 1943, Carrick shipped out for India with a transport command in the China Burma India Theater of the war. Letters home from India describe bad weather, heat and periods of boredom while he awaited his next mission. Some of his letters, like those sent home by all soldiers in the war, bore the marks of Army mail censors.

As part of the expanding war in the Pacific, the pilots and crews knew that their job was to help stalemate the Japanese in China by flying what became known as "the Hump" -- over the eastern end of the Himalayan Mountains from India to China to resupply Chiang Kai-shek's troops and U.S. Army Air Forces personnel.

The C-46 was developed as a civilian airliner by the Curtiss Wright Aircraft Co. in 1937. Curtiss Wright delivered it to the Army Air Corps in 1942 in several configurations for hauling troops and cargo. It could fly 173 mph while fully loaded at 15,000 pounds. It soon became the military's workhorse worldwide. Pilots nicknamed it "the Commando" for its ability to land almost anywhere. More than 3,000 were produced, but during its early days of military service it was plagued with mechanical difficulties, and tragically, the bugs were worked out while on the job -- flying over the eastern Himalayan peaks.

Flying the "the Hump" quickly became known as the most dangerous job in the Army Air Forces, and the C-46 picked up new nicknames: the "whale," "Curtiss Calamities," "plumbers' nightmares" and, spoken under the breath, "flying coffins."

Second Lt. Carrick Heiskell and his crew were part of the 301st Transport Squadron. These pilots often flew overloaded planes and dealt with electrical problems, leaky cockpits, midair fuel explosions and propeller trouble, which often proved catastrophic. The route was dubbed the "Skyway to Hell" and the "Aluminum Trail" -- for the large number of planes that never made it home.

Jet-stream-strength winds could push a plane up to 28,000 feet, only to drop it to 6,000 feet in a matter of minutes. Pilots compared it to a terrifying roller-coaster. The route included the Kali Gandaki Gorge, a depression much deeper and wider than the Grand Canyon. Around it, mountains rose to 10,000 feet higher than most planes could fly.

Aircraft damaged by wind, engine failure or enemy fire were too heavy to glide. They fell like rocks.

Crews that bailed out parachuted through freezing air into enemy-held mountains, and most pilots carried only a .45-caliber pistol. The story is that they saved one last bullet for themselves, to avoid torture.

DEATH OF A GOOD SON

At dusk on Nov. 26, 1943, 2nd Lt. Carrick White Heiskell, 26, and his crew of three were returning from a mission to China and preparing to land at the sprawling Army Air Forces base in Sookerating, India, headquarters for the 301st.

About 8 p.m. with its two large Pratt and Whitney engines throttled back, the C-46 turned into the base leg of its landing pattern and was given an altimeter reading by the tower. The tower operator asked Carrick about the plane's condition for yet another flight, and he replied that it was "OK."

Later, the tower would report that he had switched on his landing lights for final approach but appeared to be flying in low. Though there was a slight haze and it was beginning to get dark, he had unlimited visibility and winds were calm, according to the accident report. The plane continued its low, rapid descent, and there was no mention of a warning from the tower in the gathering darkness.

At 8:20 p.m. the plane clipped the tops of small trees near the end of the runway.

The tower reported that Carrick attempted to apply full power to gain altitude, but the aircraft, picking up speed, plowed straight ahead into the jungle canopy.

The accident report indicated that the plane hit the ground hard and struck another series of trees before cartwheeling and severing its left wing. The fuselage continued to skid and broke up when it hit a large tree. All members of the crew were thrown free of the disintegrating aircraft, which burned after impact.

The cockpit came to rest on the other side of a dirt embankment, where it burned. There were no survivors. Carrick and his crew were buried in the Army Air Corps cemetery on the base.

The words "pilot fatigue" were not mentioned in the crash report. It said the pilot misjudged his altitude and crashed short of the runway during his final approach.

Carrick had hundreds of hours of total flying time, and his proficiency rating in the C-46 was outstanding, although at the time of the crash, he had amassed only 75 hours of pilot in command time of the big plane, and records indicate that he had a very limited number of night flying hours. There's no reason to think that his co-pilot, also a second lieutenant, had any more.

In early December 1943, the Gazette reported that the Heiskells had been notified that their son was dead. As sympathy expressions poured in, his death was reported on the front pages of the Gazette and its rival, the Arkansas Democrat, and a number of out-of-state papers.

Condolences came from U.S. senators, congressmen, governors, mayors, and hundreds of friends and acquaintances. Gov. Homer Adkins, who knew Carrick from his days as a Capitol reporter, was especially dismayed. John Gould Fletcher, the Pulitzer Prize-winning author and poet, wrote a poem published in the Gazette titled "On a Young Fallen Airman."

From the many letters retained in the extensive J.N. Heiskell files at The Butler Center for Arkansas Studies, it's clear that Carrick wanted to be a part of the war effort and final victory. In later years, his father was described as something of a stoic and stern individual, but his letters to his son from 1940-43 are full of humor, love and pride. The father's correspondence conveys that he envisioned his family's future and that of the Gazette resting on his son's shoulders.

As one of the servicemen whose remains were repatriated in 1949, Carrick White Heiskell was placed in the family plot at Mount Holly Cemetery in Little Rock. The Heiskells had already erected a monument to him there, and in 1949 they added a simple military marker stating his name, rank, dates of birth and death, and the unit in which he served.

Few of the letters Carrick Heiskell wrote to his wife, Bertha, are with the Heiskell file, although the telegram from the War Department notifying her of his death is there, as is touching and tender correspondence written over the ensuing years. The Heiskells encouraged her to move on with her life, and she did remarry. One handwritten letter from her 83-year-old former father-in-law in 1955 congratulates her on the pending birth of a child.

John Netherland Heiskell lived to be over 100. He is buried next to his sons and wife at Mount Holly Cemetery.

Sources for this article are primarily from personal letters, Arkansas Gazette news articles and information contained in the Heiskell file at The Butler Center for Arkansas Studies. Information was also obtained from Aviation Archeology, a company that researches WWII aircraft losses and Army Air Corps military records; the Central Arkansas Library System Encyclopedia of Arkansas; and internet information on the Curtiss Wright C-46 Commando and "the Hump."

Ron Fuller is a former Army officer, former state legislator, and lover of Arkansas and military history. He is a member of the Arkansas History Commission and chairman of the Arkansas MacArthur Military Museum Heritage Board.