A hair braider from Maumelle who's seeking the Democratic gubernatorial nomination was among the last candidates to make their bids official as the one-week filing period for Arkansas' election ended.

Leticia Sanders filed paperwork Thursday to seek the Democratic nomination for governor. That creates a two-person primary with Jared Henderson, who filed earlier this week for the race. Republican Gov. Asa Hutchinson faces Jan Morgan in the May primary.

Election officials say 135 Republicans and 91 Democrats filed to run for state and federal office over the past week. 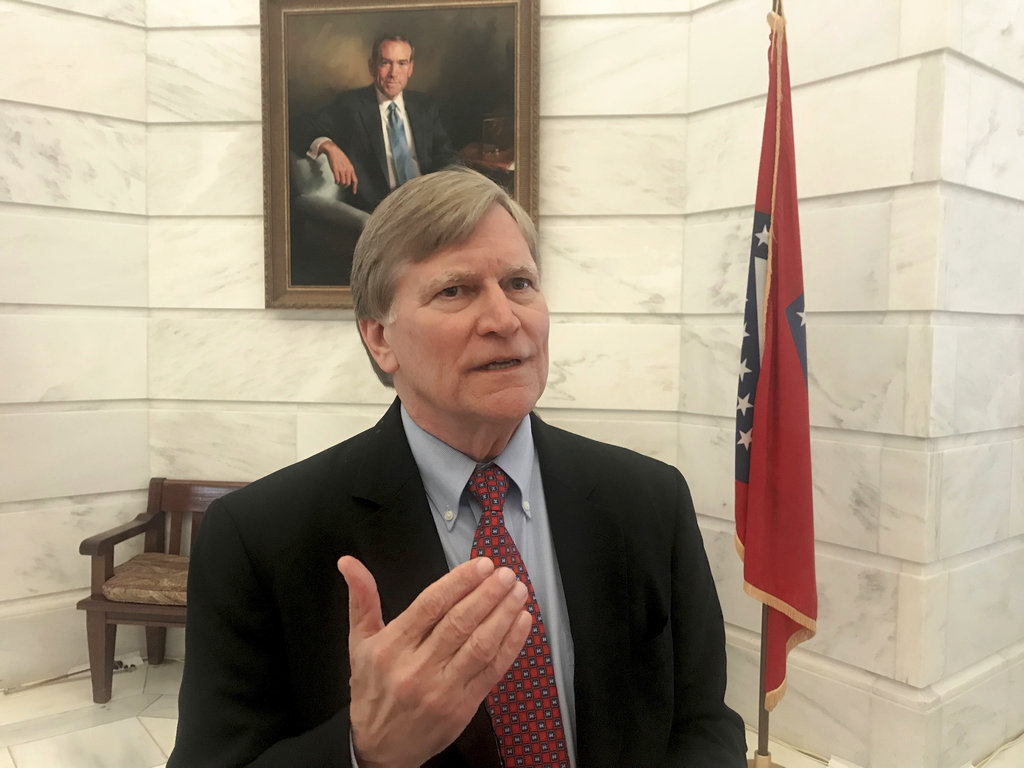 A former federal consumer product regulator has dropped his bid for the Arkansas Legislature and is now trying to unseat the state's Republican attorney general.

Mike Lee filed paperwork Wednesday to seek the Democratic nomination for attorney general, challenging Republican incumbent Leslie Rutledge. The 70-year-old Lee had earlier filed for a state House seat but said he decided to switch to the AG's race after encouragement from supporters.

"My history and my experience and everything I've gone through in my lifetime has probably more prepared me for an office like attorney general than the Legislature," Lee told reporters.

Lee avoided direct criticism of Rutledge, saying he planned to later outline his differences with the Republican. He said he supports the death penalty but disagreed with a plan Rutledge's office defended in court to execute eight inmates over an 11-day period in April before a lethal injection drug expired. Lee said the schedule of executions "looked rushed." Arkansas ultimately put four men to death after the other four were spared by state and federal courts.

Lee also said he supports the federal health overhaul, which Rutledge has repeatedly criticized and called for repealing.

Rutledge, who was first elected in 2014, has more than $388,000 in the bank for her re-election bid, according to her latest fundraising report.

"The people of Arkansas know that the right experience matters, and I am honored by the outpouring of support I've received from across the state for my re-election as Arkansas's chief law enforcement officer," she said in a statement issued by her campaign. "As I've proven every day, no one will outwork me on behalf of Arkansans."

Libertarian nominee Kerry Hicks also filed to run for attorney general Wednesday. The Libertarian Party selected its nominees at its convention on Saturday. The one-week filing period for state and federal office in Arkansas ends Thursday.

The newly announced candidate, Mike Lee of Little Rock, originally filed to run for a state House seat. Instead, Lee said Wednesday he would switch to a run for statewide office.

Lee, 69, is a semiretired toy-safety regulator who worked for the U.S. Consumer Product Safety Commission in Washington, D.C., before returning to Little Rock.

In an interview over his initial plans to run for state representative, Lee said he occasionally teaches classes at the University of Arkansas at Little Rock’s William H. Bowen School of Law.

Rutledge filed last week to run for a second four-year term. The Republican directed an exhaustive legal fight last year to resume executions in Arkansas after a decade-long hiatus.

She also said recently that she would be mounting an investigation into pharmaceutical companies to determine their responsibility in the state’s opioid addiction crisis.

Lee is the only Democrat to announce plans to run for attorney general. Democrats have announced candidates for governor, lieutenant governor, land commissioner and secretary of state.

Republicans now hold all of the state’s seven constitutional offices.

The former head of an education nonprofit has filed paperwork to run as a Democrat for governor in Arkansas, saying he believes the party can break through in the state despite Republicans' dominance.

Jared Henderson filed Tuesday for the party's nomination to challenge Republican Gov. Asa Hutchinson. Henderson is the former executive director of the Arkansas branch of Teach for America.

Other Democrats filing for statewide office Tuesday include Susan Inman for secretary of state and Anthony Bland for lieutenant governor. The one-week filing period for state and federal office ends Thursday.

Jared Henderson files today to run for Governor of Arkansas on the Democratic ticket. pic.twitter.com/W65Si3OCOa

 Goodson, who is expected to face two challengers, is the only member of the Supreme Court up for re-election this year. She was first elected in 2010.

Goodson was defeated in her bid for chief justice two years ago after conservative groups flooded the state with advertisements and mailers criticizing her. The groups and candidates for that and another high court seat spent more than $1.3 million on TV advertising, a record for the state in a judicial election.

"No matter how many candidates are in the field, my job remains the same," Goodson said after filing. "I will be out among the people of Arkansas seeking to earn their trust and confidence."

The head of one of the groups, the Judicial Crisis Network, last month criticized Goodson as a "liberal judicial activist" but did not say whether it planned to get involved in this year's race. Goodson said she'll be better prepared to respond to what she called "half-truths" about her record if targeted by outside groups.

Kenneth Hixson, a Court of Appeals judge from Paris, said Tuesday he will file to run for a spot on the state Supreme Court, creating a three-way race.

Justice Courtney Goodson, who serves in position three on the court, announced last month she is running for re-election. David Sterling, the top attorney at the Department of Human Services, has already filed to run against her.

The position three spot is the only seat on the seven-member court up for election this year.

Judicial elections in Arkansas are non-partisan, and the election for Goodson's seat on the high court, as well as other judicial positions, will be held on the same day as the May primary.

In a phone interview, Hixson said he would file at the capitol either Tuesday or Wednesday.

The filing period ends on Thursday.

Hixson said his decision to run was "fairly last minute" and he had not yet established a platform. 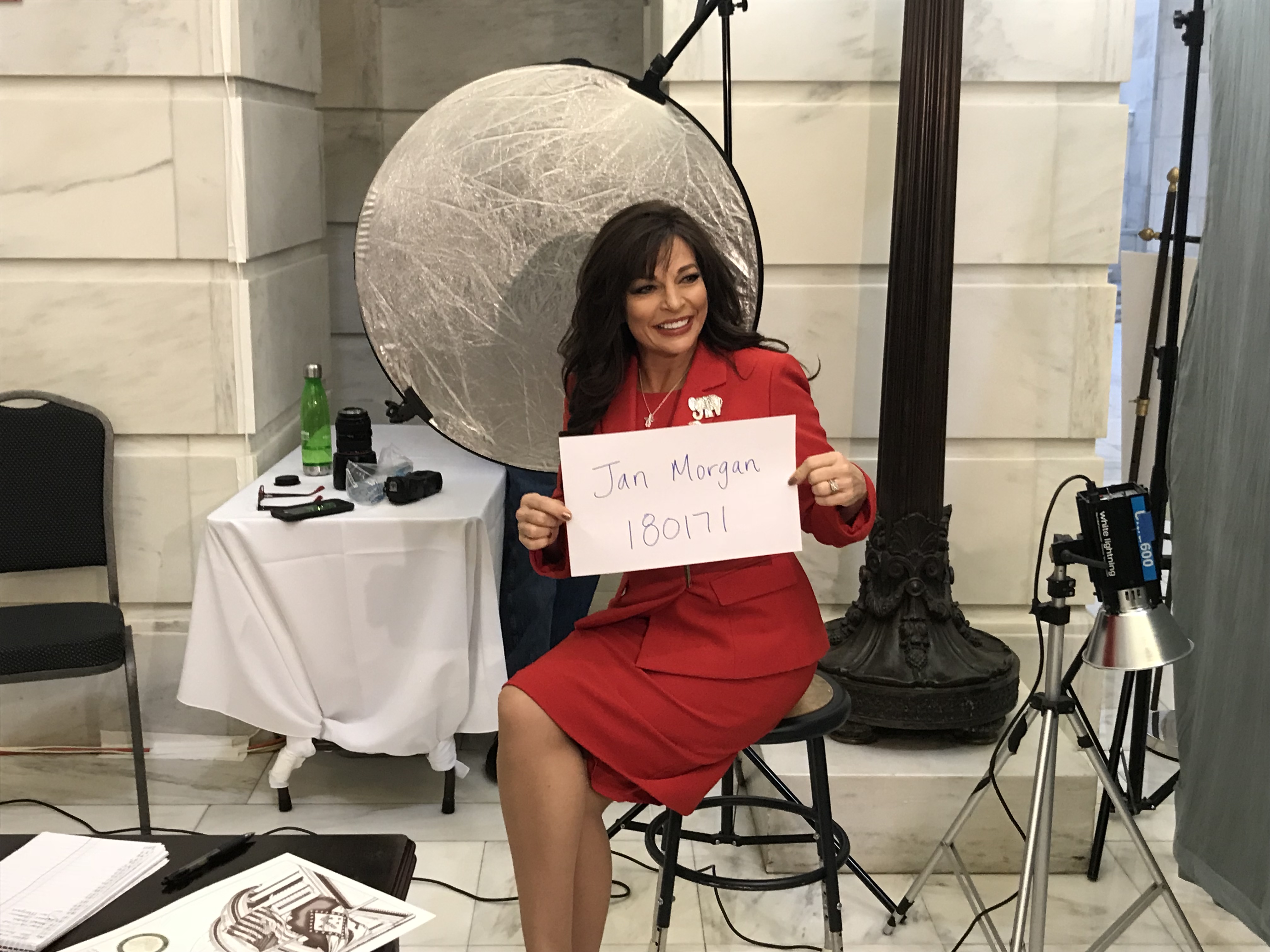 Jan Morgan, a gun range owner from Hot Springs, formally filed to run for governor of Arkansas at the state Capitol on Monday.

Morgan said she decided to face current Gov. Asa Hutchinson in the Republican primary “at the request of the people.”

She said Arkansans she spoke with wanted a choice between Hutchinson, who she said was an “establishment progressive” who increased taxes and spending, and a “constitutional conservative” like herself. She added that she expected support from people who liked President Donald Trump’s message.

When asked about her 2014 declaration that her gun range was a “Muslim-free zone” and if that would affect her governing, Morgan said running the state would be a “totally different ballgame.”

Morgan said running a private club where people are handling lethal weapons within a few feet of each other requires a higher level of discernment than other businesses.

“I make no apologies,” she said.

Still, she noted that she supported religious liberty and would work with and debate people of different faiths.

“I will be a governor for all the people of Arkansas,” she said.


Applause at the Capitol after Jan Morgan files to run for governor #arpx pic.twitter.com/ivx29uxpcR

Elvis Presley is officially running for a congressional seat in Arkansas. But don't confuse him with the rock 'n' roll icon, unless he's performing.

Both men filed paperwork Monday to run for the 1st Congressional District in eastern Arkansas. Crawford has represented the area for four terms.

Presley has previously run for Arkansas governor, land commissioner and the state Legislature. The Libertarian Party selected its nominees at a convention over the weekend.

The one-week filing period for state and federal office in Arkansas ends Thursday.

U.S. Rep. Steve Womack has filed to run for re-election.

The Republican was among the candidates filing paperwork to run in this year's election Friday.

The one-week filing period for office kicked off Thursday.

Womack was first elected to the 3rd District House seat in northwest Arkansas in 2010 and is chairman of the House Budget Committee. Josh Mahony, a Democrat has filed to challenge him for the seat.

In an emailed statement, he said he will "continue working to change that so we can grow jobs and compete in a global marketplace."

He added: "Hardworking Arkansas taxpayers want to maintain bold, conservative leadership in the lieutenant governor’s office so we can continue to reform state government and give taxpayers more value for their tax dollars.”

No other candidates have filed to run in that race as of Friday morning. 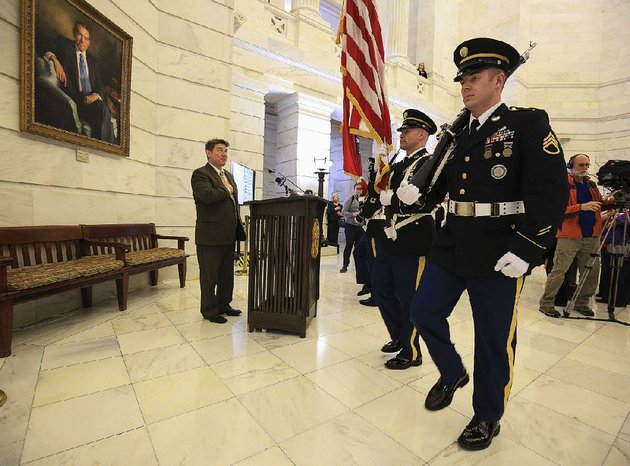 Candidates -- along with their supporters and families -- packed elbow to elbow on the second floor rotunda at the state Capitol on Thursday for the opening of the state and federal campaign filing season.

Three Democrats have filed to run for a U.S. House seat in central Arkansas that the party hopes to reclaim.

The top attorney for the Arkansas Department of Human Services has filed to challenge state Supreme Court Justice Courtney Goodson in the May judicial election.

David Sterling, the chief counsel for the department, filed paperwork Thursday to run against Goodson. Sterling announced last month he was seeking the seat, the same day Goodson announced she was running for re-election.

Goodson lost her bid for chief justice on the court two years ago after she was targeted by outside groups that flooded the state with ads and mailers criticizing her. Sterling ran unsuccessfully for the Republican nomination for attorney general four years ago.

Attorney General Leslie Rutledge, who has yet to receive an announced challenger, filed for re-election Thursday afternoon.

She said she will focus on federal regulations she has challenges as well as continuing her recently launched investigation into pharmaceutical companies’ role in the opioid epidemic.

“I’m just excited to be here today and be filing for re-election. Should someone decide to get into the race in the next week, then we’ll welcome that opportunity,” Rutledge said. “I feel like the campaign is prepared."

U.S. Rep. French Hill has filed for re-election in Arkansas' 2nd Congressional District, and so have two Democratic challengers who hope to win the seat.

In a statement, Hill said he would "continue to work as a sensible conservative leader who values the role of limited government, economic independence and prosperity for our citizens, and safety for our families."

Arkansas Gov. Asa Hutchinson filed for re-election Thursday afternoon as dozens of other candidates also made official their vies for political office.

Before filing, Hutchinson said he plans to continue promote the agenda he set out in his first term, while placing an emphasis in his second bid on education.

Among the ideas he has for education is reading literacy and his continued focus on computer science.

The Republican governor also called his role an honor, and said he’s been pleased with the outcome of his first term — including jobs creation, economic development and a tax cut for Arkansans. 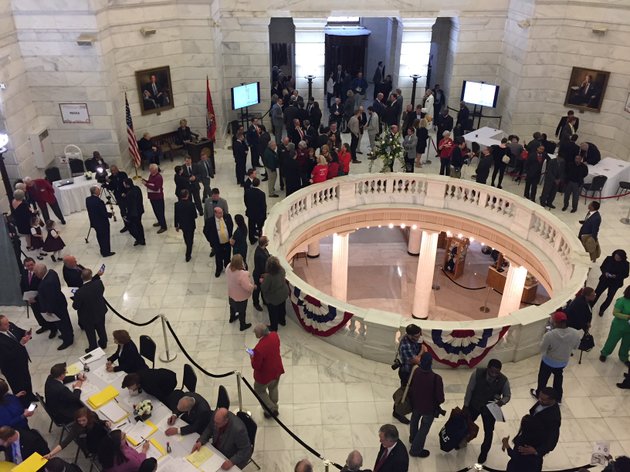 This year's campaigns for state and federal offices in Arkansas are officially open as hundreds of candidates are at the Capitol to begin filing paperwork to make their candidacies official during the next week.

The one-week filing period for this year's election began at noon. Republican Gov. Asa Hutchinson plans to file paperwork for his re-election bid on Thursday afternoon. Arkansas Treasurer Dennis Milligan, who is filing for reelection, was first in line.

This year's election includes the governor's and treasurer's races and the other five constitutional offices, as well as all four U.S. House seats. Arkansas Supreme Court Justice Courtney Goodson is fending off a challenge from David Sterling, the top attorney for the Department of Human Services.

All 100 state House seats and 17 Senate seats will also be up in this year's election.


Filing day is now underway at the state Capitol. Check back with @ArkansasOnline for updates as candidates file for races in Arkansas. #ArkDG #ARNews pic.twitter.com/Fdsc0BJyD8