Important dates in the desegregation suit:

Nov. 30, 1982 The mostly black Little Rock School District sues the mostly white Pulaski County Special and North Little Rock school districts, as well as the state, to create a countywide school district, seeing it as an end to racial segregation in the schools.

April 13, 1984 U.S. District Judge Henry Woods orders consolidation of the three Pulaski County school districts, saying the policies and practices of the suburban districts and the state have resulted in school segregation and discrimination in area schools.

March 1, 1989 Attorneys for the state, the three Pulaski County school districts and the NAACP sign a proposed financial settlement in which the state would pay about $129.75 million over 10 years to the three districts. The Legislature subsequently agrees to pay it.

July 6, 1990 Woods issues an order recusing himself from the school desegregation case, calling the situaion hopeless and saying that obstructionists to desegregation had won. US. District Judge Suan Webber Wright, now the chief judge, takes Woods' place in the case. 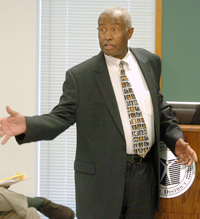 April 10, 1998 Wright approves the Revised Desegregation and Education Plan, which envisions releasing the Little Rock district from federal court monitoring in 2001. District representatives declare that the end of the litigation is in sight.

March 13, 2001 The Little Rock School Board approves a desegregation report that it hopes will show Wright that the district is in substantial compliance with its desegregation obligations and eligible for release from court monitoring.

March 15, 2001 Attorneys for the Little Rock School District and the state negotiate a landmark deal that relieves the district of repaying most, if not all, of a $20 million loan, and preserves millions in state funding for Little Rock magnet schools and other desegregation expenses.

June 24 , 2001 Walker objects to Little Rock's request that it be released from federal court supervision.

Nov. 20, 2001 Wright announces that she will step down from the desegregation case in 2002. She continues to hold hearings and make decisions in the case.

Sept. 13, 2002 Wilson declares Little Rock schools free from court supervision on every aspect of their operation but one: evaluating program fr their effectiveness in raising the achievement levels of black students.

March 2, 2004 A three-judge panel of the 8th U.S. Circuit Court of Appeals at St. Louis affirms Wilson's September 2002 decision on the need for program evaluations.

June 30, 2004 After a court hearing, Wilson again denies the complete release of the district from court monitoring, saying in a 69-page order that the district failed to adequately evaluate academic programs as he had directed it to do in 2002, and it must be monitored for at least two more years. The Little Rock district appeals to the 8th Circuit Court of Appeals.

April 12, 2005 A three-judge panel of the 8th Circuit questions whether any other district in the country has as extensive an evaluation plan as that envisioned for Little Rock.

June 26, 2006 A panel of the 8th Circuit denies the Little Rock district's request to be free of federal court supervision. The panel, with one partially dissenting opinion, says Little Rock's school system has not met its obligation to assess and evaluate academic programs, although the appeals court wrote that the judge "may have come close to crossing the line" between enforcing the agreement and imposing requirements. The appeals court said there is a "substantial likelihood" that the Little Rock school system's efforts to comply with the plan "will in due course entitle it to be declared unitary."

Feb. 23, 2007 Wilson declares the Little Rock public school system unitary. The judge says the Little Rock School Board can run the district "as it see fit." Joshua Intervenors appeal to the 8th Circuit.

May 19, 2010 Little Rock district asks Miller to halt the approval of new or expanded charter schools in Pulaski County, saying the state of Arkansas has failed to meet its obligations under the 1989 financial settlement with the districts.

May 19, 2011 Miller issues order relieving the state from its obligation to pay most desegregation aid to the three Pulaski County districts. Only state aid for majority-to-minority interdistrict student transfers is preserved. Miller finds North Little Rock and Pulaski County Special only partially unitary.

May 20, 2011 Little Rock School District files notice that it will appeal Miller’s ruling on ending most state aid to the 8th U.S. Circuit Court of Appeals.