After death-row inmates' attorneys argued in a Friday filing that a convicted murderer's death shows that Arkansas' protocol didn't "prevent an execution by torture," a federal judge has ordered the state to collect blood and tissues samples from his body.

U.S. District Judge Kristine Baker ruled that the Arkansas Department of Correction must request that the state medical examiner's office collect the samples by 8 p.m. tonight. Those samples must be preserved until a further court order, Baker wrote.

The office must also conduct an autopsy at the appropriate time "consistent with the Medical Examiner’s normal practice."

Media witnesses say that after the first drug was administered Thursday night, Williams' body lurched 15 times over a period of 10 to 15 seconds as he was "coughing, convulsing, lurching, jerking with sound even with the [execution chamber] microphone turned off."

The governor said Friday that there is no reason for an independent investigation into Williams' execution.

5:02 p.m. » Prisons agency releases documents detailing time up to and during inmate's execution

The Arkansas Department of Correction on Friday afternoon released documents that outlined the hours leading up to and during death-row inmate Kenneth Williams' execution Thursday.

The internal affairs log shows it took eight minutes to restrain Williams about 30 minutes before his lethal injection began.

Media witnesses say that after the first drug was administered, Williams' body lurched 15 times over a period of 10 to 15 seconds as he was "coughing, convulsing, lurching, jerking with sound even with the [execution chamber] microphone turned off."

In a filing Friday, attorneys argued that accounts of Williams' death show that the “Arkansas execution protocol did not prevent an execution by torture.” The state refutes those claims.

Arkansas Attorney General Leslie Rutledge on Friday afternoon, in response to a motion filed by his attorneys, refuted claims that the recent execution of Kenneth Williams was “botched.”

Three Arkansas journalists who witnessed Williams’ death by lethal injection Thursday night reported that the inmate coughed, convulsed and lurched with sound that was audible even with a microphone turned off in the execution chamber.

“As the record in this matter shows, coughing and muscle spasms are associated with the administration of midazolam and are not indicative of any degree of pain or suffering,” the document in U.S. District Court for the Eastern District of Arkansas states.

Rutledge wrote that Williams “did not exhibit any signs of distress or pain at any point during his execution.”

Earlier Friday, attorneys for Williams and other death-row inmates filed a motion in federal court seeking the preservation of evidence related to Williams’ death.

Williams’ attorneys argued that the state’s three-drug protocol “did not prevent an execution by torture.”

Rutledge called the motion “improper,” adding that the “drugs worked as intended and planned.”

An emergency motion has been filed in U.S. District Court for the Eastern District of Arkansas seeking to preserve evidence related to the execution of Kenneth Williams.

In a filing Friday, attorneys argued that accounts of Williams' death by lethal injection Thursday night show that the “Arkansas execution protocol did not prevent an execution by torture.”

Williams’ body lurched 15 times over a period of between 10 to 15 seconds as he was "coughing, convulsing, lurching, jerking with sound even with the [execution chamber] microphone turned off,” the Arkansas Democrat-Gazette previously reported, citing media witnesses accounts.

The motion requested that the Lincoln County coroner and anyone acting on behalf of that agency or the state Department of Correction “immediately preserve all physical evidence” of Williams' execution.

The request also seeks an immediate draw of blood from four locations on Williams’ body before 8 p.m. Friday.

It also directs the coroner to “preserve tissues from the brain, liver and muscle form a location other than from the leg or arm where the IV was set.”

U.S. District Judge Kristine Baker set a deadline of 3:30 p.m. for the state of Arkansas to respond to the emergency motion.

Kenneth Williams was the fourth Arkansas inmate executed in eight days. Witnesses say he lurched and convulsed 20 times while being put to death.

Deborah Denno of Fordham University said the accelerated schedule adopted by Arkansas to put to death eight inmates in 11 days increased the risk of problems. She said state officials typically describe execution irregularities as minor or normal but that it was hard to accept Arkansas' account.

Denno says Williams' execution along with a lawsuit brought by one of the drug suppliers will result in drug companies taking more steps to prevent their products from being sold to the state. 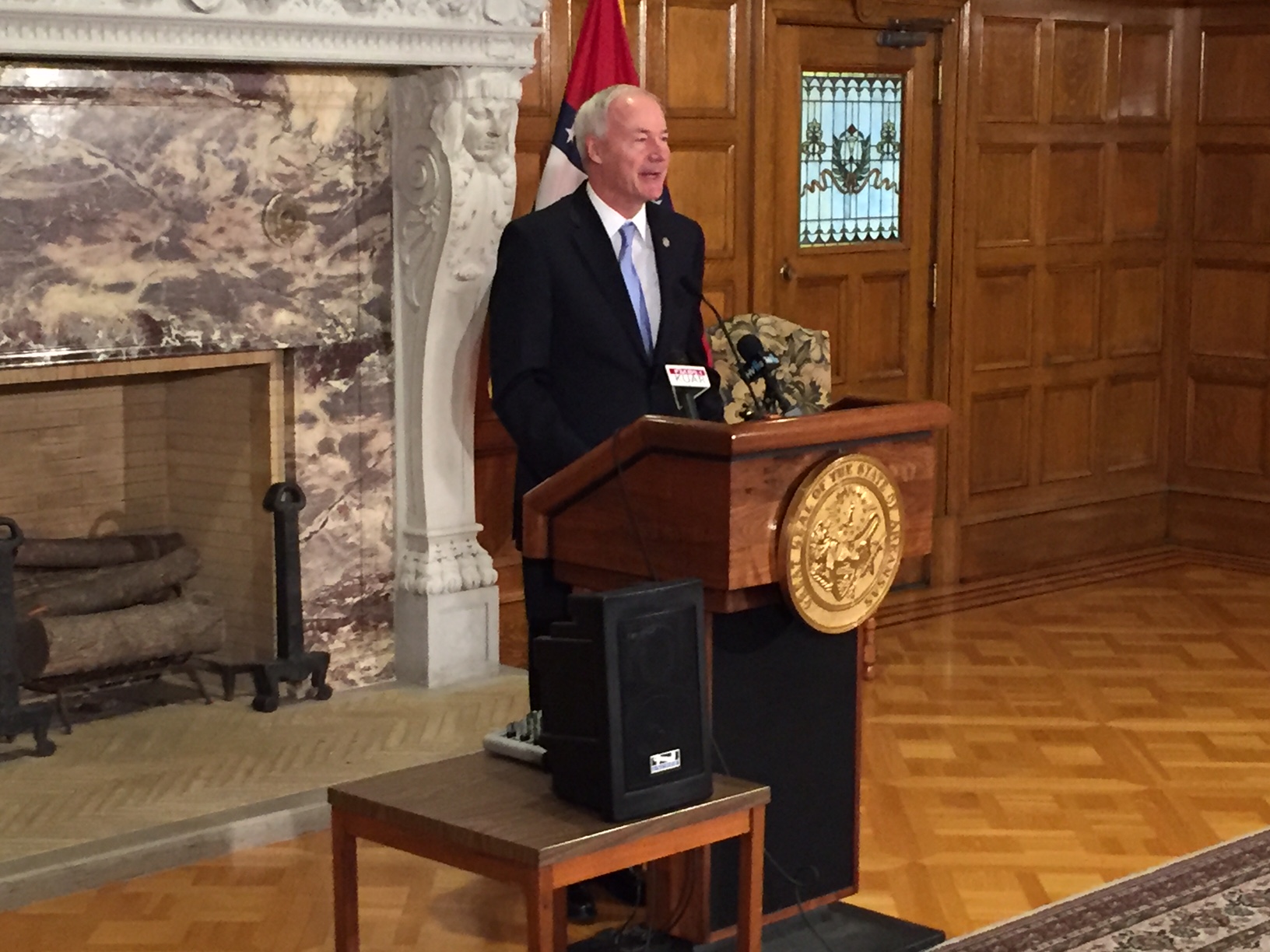 All four executions recently carried out by the state of Arkansas were done in accordance with protocols established, Gov. Asa Hutchinson said Friday.

The Arkansas Democrat-Gazette previously reported, citing information from a media witness, that Williams' body lurched 15 times over a period of 10 to 15 seconds as he was "coughing, convulsing, lurching, jerking with sound even with the [execution chamber] microphone turned off."

"It was obvious to me that there was no indication of pain," Hutchinson said, referencing accounts that Williams showed "10 seconds of movement" before he was pronounced dead.

Hutchinson said coughing can be a side effect of the administering of one of the three drugs: midazolam.

The governor added that there is no reason for an independent investigation into Williams' execution.

A standard review process after the inmates' deaths will provide details regarding any issues that arose, he said.

Eight executions had initially been set in April, though four prisoners were spared pending further review of their cases.

The American Civil Liberties Union says Arkansas may have subjected a death row inmate to cruel and unusual punishment in its rush to use a lethal injection drug before it expires, following reports that the man convulsed and lurched during his execution.

Rita Sklar, the executive director of the ACLU of Arkansas, has called for an investigation into witness accounts of Kenneth Williams' execution to "determine whether the state tortured" him.

An Associated Press reporter who witnessed Williams' execution Thursday says his body jerked 15 times in quick succession about three minutes into the process. He lurched violently against the leather chest restraint, then the rate slowed for a final five movements.

Click here for a minute-by-minute timeline of the execution by the AP reporter.

Sklar said in a statement Friday that Gov. Asa Hutchinson "ignored the dangers" to beat the Sunday expiration date of the state's supply of midazolam. 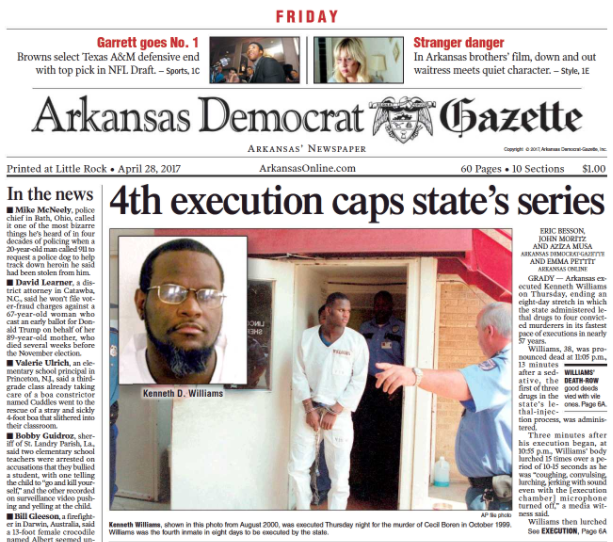