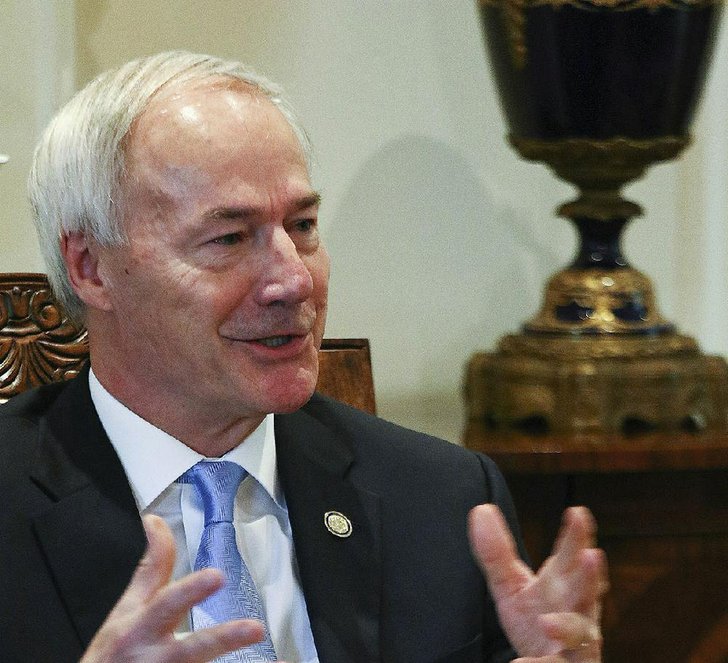 Gov. Asa Hutchinson said he is "surprised and disappointed" by the Arkansas Supreme Court's decision to issue a stay in the execution of Stacey Johnson, which had been scheduled for Thursday night.

"When I set the dates, I knew there could be delays in one or more of the cases, but I expected the courts to allow the juries' sentences to be carried out since each case had been reviewed multiple times by the Arkansas Supreme Court, which affirmed the guilt of each," Hutchinson said in a statement Wednesday night.

"The minority opinion was clear in its dissent, but I know the families of the victims are anxious for a clear-cut explanation from the majority as to how they came to this conclusion and how there appears to be no end to the court's review."

Hutchinson said he planned to consult with Arkansas Attorney General Leslie Rutledge to determine the "next steps."

A Pulaski County judge issued a verbal temporary restraining order Wednesday on Arkansas’ planned use of one of three drugs used for lethal injections, effectively blocking all executions. 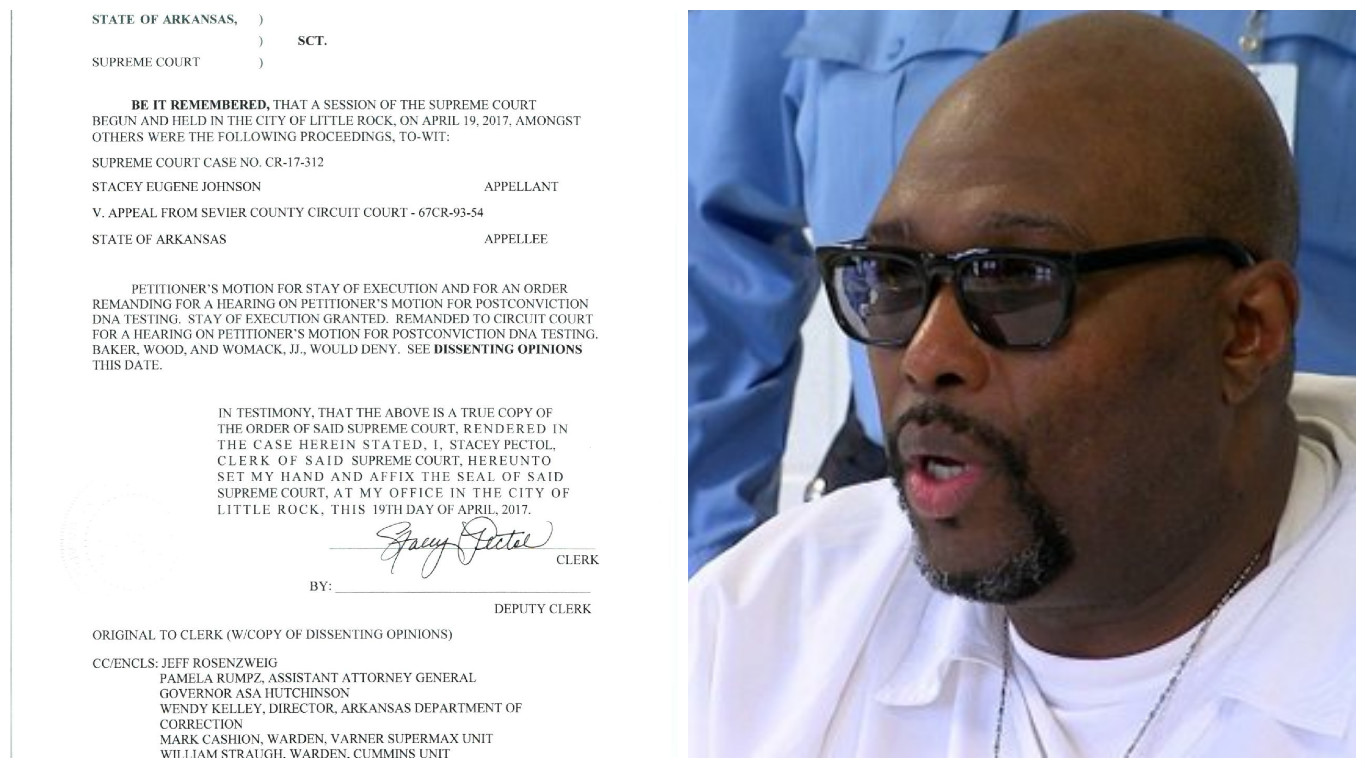 LITTLE ROCK — The Arkansas Supreme Court has halted one of two executions planned for Thursday night, once again throwing a wrench in the state's plans to conduct several executions before the end of April, when one of its lethal injection drugs expires.

The court ruled that Stacey Johnson could pursue his requests for enhanced DNA testing in hopes of proving his innocence in the 1993 rape and killing of Carol Heath. The Innocence Project filed the appeal along with Johnson's attorney.

"We've established that modern DNA testing methods can prove Mr. Johnson's innocence, and Arkansas law clearly established that Mr. Johnson is entitled to that testing," said Karen Thompson, a staff attorney with the Innocence Project, on Tuesday after the appeal was filed. "It's just common sense that before the government sends a man to his death, we should use the best scientific methods to make sure we have convicted the right person."

In its 4-3 ruling, the state's highest court followed the same split it did Monday, when it halted two other executions involving different inmates.

"Today, our court gives uncertainty to any case ever truly being final in the Arkansas Supreme Court," Justice Rhonda Wood wrote in a dissenting opinion.

Inmate Ledell Lee is also set for execution Thursday night, but he also has legal challenges pending before several courts, including a similar request for more DNA tests.

A spokesman for Arkansas Attorney General Leslie Rutledge said the state is reviewing its options regarding Johnson's case. The state can ask the Arkansas Supreme Court to reconsider its decision or appeal to the U.S. Supreme Court, which Monday opted not to vacate a separate stay involving inmate Don Davis.

A state prison official testified that he deliberately ordered the drug last year in a way that there wouldn't be a paper trail, relying on phone calls and text messages. Arkansas Department of Correction Deputy Director Rory Griffin said he didn't keep records of the texts, but McKesson salesman Tim Jenkins did. In text messages from Jenkins' phone, which came up at Wednesday's court hearing, there is no mention that the drug would be used in executions.

A deputy director of the Arkansas prison system says he deliberately ordered an execution drug in a way so there wouldn't be a paper trail.

Rory Griffin testified Wednesday in a lawsuit filed by medical supply company McKesson Corp., which is asking a judge to not allow Arkansas to use its drug in executions.

Griffin said he used phone calls and text messages last year to order one of Arkansas' three execution drugs. He said he didn't keep records of the texts, but a McKesson representative did. 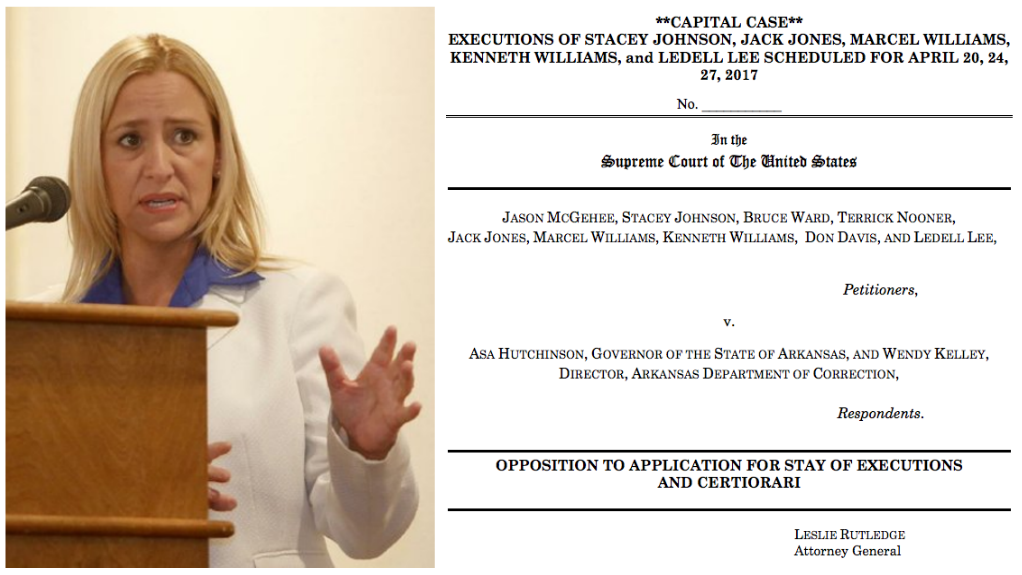 The state of Arkansas is asking the U.S. Supreme Court not to block a series of executions scheduled this month beginning Thursday.

In a filing Wednesday afternoon, Attorney General Leslie Rutledge dismissed a request to the nation's high court from the death-row inmates as "nothing more than an attempt to prevent Arkansas from carrying out [their] executions decades after [they] brutally took the lives of young mothers, children, and men who just happened to be in the wrong place at the wrong time."

[📄 Click here to read the full filing to the U.S. Supreme Court]

Rutledge's 33-page filing came after attorneys for death-row inmates filed with the U.S. Supreme Court asking for a review of a federal judge's stay that was later overturned by the 8th Circuit Court of Appeals. They also asked for an emergency appeal if that review extended beyond 7 p.m. Thursday, when the next execution is scheduled.

Rutledge said the request should be denied, calling the filers "capital murderers who have enjoyed multiple opportunities to challenge their convictions, sentences and — critically — the method by which they will be lawfully executed."

"Their guilt and the justness of their sentences are beyond any dispute," she wrote.

The medical supplier employee who sold Arkansas its supply of vecuronium bromide said in court Wednesday he would not have made the sale if knew the state intended to use the drug in executions. Tim Jenkins, an account manager for the drug distribution company McKesson Corp., testified in front of Pulaski County Circuit Judge Alice Gray as part of his employer’s suit against the state Department of Correction.

McKesson's lawyers argued that Gray should issue a temporary injunction blocking the five executions scheduled this week and next because the state used deceit to obtain the drug, the Arkansas Democrat-Gazette reported. Vecuronium bromide, a paralytic that relaxes the respiratory system, is one of the three drugs used in the state’s lethal-injection protocol.

Jenkins, who has worked in sales for McKesson for about 24 years, said in court he was driving sometime last summer when he got a call from Rory Griffin, the deputy director of health programs for the Department of Correction. Griffin told him he was interested in buying the drug, and Jenkins instructed him to email him the name of it so he could get the spelling right.

Griffin then told Jenkins he’d “prefer not to” and instead gave the name again over the phone while Jenkins wrote it down on paper, the employee told the courtroom. Griffin then texted Jenkins the next day with the corresponding company number for the drug, and Jenkins placed the order, he said.

At no time did they discuss that the drug was to be used for executions, Jenkins said, noting he would not have completed the sale if he knew. 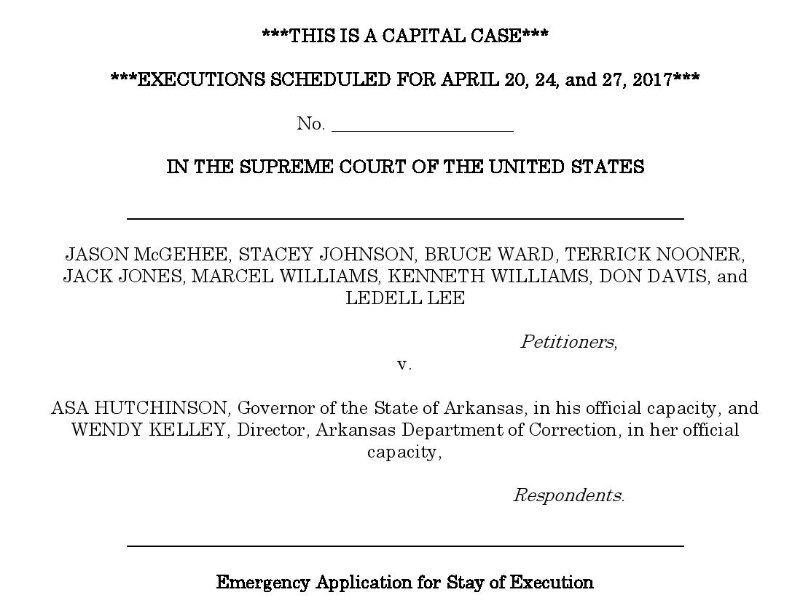 A group of death-row inmates scheduled to die over 11 days this month have filed with the U.S. Supreme Court, seeking a review of an appeals court's decision to toss a stay of their executions issued days earlier by a federal judge.

In the filings Wednesday, attorneys for the inmates told the nation's high court that "recent lethal-injection decisions have spawned unresolved, substantial questions that have divided the circuits." They also asked for the Supreme Court to issue an emergency stay if no decision is made by 7 p.m. Thursday, when the next execution is scheduled.

[📄 Click here to read the full filings to the U.S. Supreme Court]

U.S. District Judge Kristine Baker on April 15 issued a stay of Arkansas' scheduled executions in a 101-page ruling in a lawsuit challenging the state's lethal-injection protocol. The 8th Circuit Court of Appeals, however, vacated that stay two days later.

The state originally scheduled two inmates to die Monday night, but those executions were not carried out because of a separate stay issued by the Arkansas Supreme Court.

11:55 a.m. » Death-row inmates moved to cells next to execution chamber 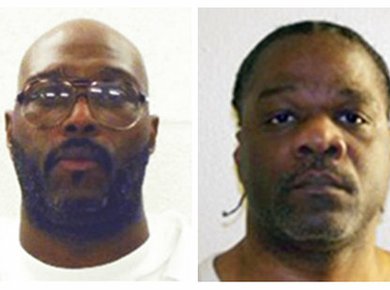 A pair of death-row inmates scheduled for lethal injection Thursday evening have been transferred to the Cummins Unit, the location of the state's execution chamber, a prisons spokesman said Wednesday.

The spokesman said both Stacey Johnson and Ledell Lee are being held in separate cells adjacent to the execution chamber, which is located a short drive down the road from the prison that houses the state's death-row inmates.

Thursday's double execution is scheduled to start around 7 p.m., barring intervention through any of several ongoing lawsuits.

The Department of Correction had planned an earlier pair of executions Monday and similarly moved condemned inmate Don Davis to the Cummins Unit over the weekend. His execution, as well as Bruce Earl Ward's, never occurred due to stays put in place by the Arkansas Supreme Court.

Ward was never moved to the Cummins Unit. After Davis' execution was called off at the final hour, he was moved back to his cell at the nearby Varner Unit.

An inmate set to die Thursday night is asking the Arkansas Supreme Court to block his execution so he can pursue more DNA tests in hopes of proving his innocence.

A judge in Pulaski County on Tuesday rejected the request for DNA testing from inmate Ledell Lee. Attorneys for the inmate filed a request Wednesday for a stay with the state's highest court.

Arkansas plans to execute Lee and another inmate, Stacey Johnson, on Thursday night. There are no current stays blocking those executions, but both inmates have pending court challenges.

Arkansas Gov. Asa Hutchinson originally scheduled eight executions to occur before the end of April, when one hard-to-acquire lethal injection drug expires. But courts have blocked three of those executions from going forward. 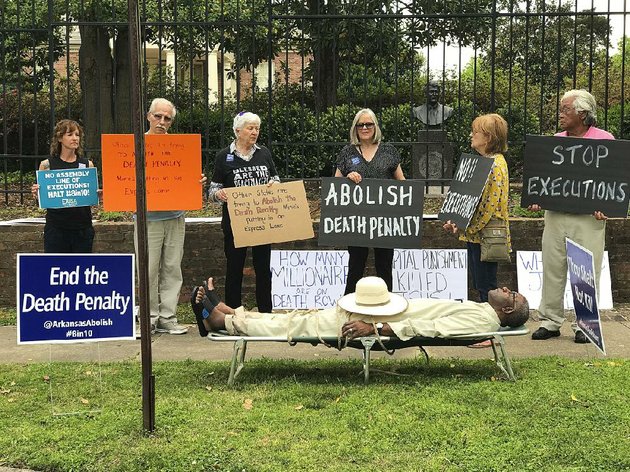 LITTLE ROCK — An Arkansas judge who participated in an anti-death penalty demonstration after issuing an order blocking the state's executions is defending the move, saying his ruling was guided by property law and not his views on capital punishment.

Pulaski County Circuit Judge Wendell Griffen wrote in a blog post Wednesday that he was portraying Jesus when he lay on a cot for an hour and a half outside the governor's mansion after he issued the order last week barring Arkansas from using one of its execution drugs. The state Supreme Court on Monday lifted Griffen's order and prohibited the judge from considering any death penalty-related cases.

10:27 a.m. » Arkansas AG: Medical supplier's complaint that would halt executions should be dismissed


A complaint brought by a medical supplier that seeks to prevent one of its drugs from being used in lethal injections in Arkansas should be thrown out, the state's attorney general said in a filing Wednesday. McKesson Medical-Surgical Inc. on Tuesday filed a complaint in Pulaski County Circuit Court seeking a temporary restraining order or injunction "to prevent the use of our product for something other than a legitimate medical purpose," it said in a statement. 📄 Click here to read the full complaint filed Tuesday by McKesson.

The filing from Rutledge contends McKesson's complaint fails to "state facts upon which relief can be granted" and notes that it "amounts to a stay of executions" because a court order barring the drug's use would prevent the lethal injections from proceeding.

"[T]his Court lacks jurisdiction to grant a stay of executions as a matter of settled Arkansas law," Rutledge wrote. "The complaint should be dismissed accordingly."

A hearing on the case before Circuit Judge Alice Gray is scheduled for 12:30 p.m.

The executions of Ledell Lee and Stacey Johnson are scheduled Thursday night.