ON FILM: The Hoax: Is it real, or is it Irving? 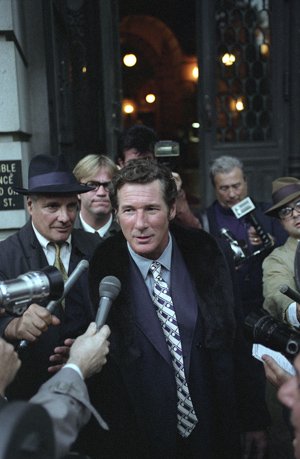 This is not Clifford Irving; it's Richard Gere, who portrays the famous forger in The Hoax.

LITTLE ROCK — I was supposed to see Lasse Hallstrom's The Hoax this morning, but something went wrong and the screening didn't happen. I hope we still get a chance to see it in time to review it - right now it's scheduled to open April 13.

I'm particularly interested in The Hoax because it tells a highly fictionalized, or maybe I should say stylized, version of the Clifford Irving affair. Irving, you may remember (I'm

always surprised to meet people whodon't remember the 1970s), was the author who claimed to have written an authorized autobiography of reclusive billionaire Howard Hughes. Apparently Irving and co-conspirator Richard Suskind figured that Hughes had so retreated from the world that he wouldn't bother resurfacing just to call them liars.

So Irving forged a bunch of documents - including letters from Hughes - and Suskind did a lot of research, and together they faked a book supposedly based on interviews with Hughes that Irving had conducted in secluded places all over the world. (One interview was set atop an Egyptian pyramid.) He eventually managed to swindle more than $750,000 out of publisher McGraw-Hill, most of which was earmarked for Hughes.

Irving was forging Hughes' signature on the checks, which were then deposited in a Swiss bank account. Even after Hughes came forward by teleconference and disavowed any knowledge of the proposed book, Irving attempted to bluff his way through by claiming that the voice on the other end of the speakerphone was an impostor. It was only when Swiss authorities caught Irving's wife depositing checks made out to Hughes that the truth emerged.

While the premise sounds exciting, the actual story would seem to have limited cinematic possibilities - faking a book doesn't require an author to do much other than type; the reason the filmmakers took a lot of liberties with Irving's story is because the real story of Hughes' autobiography hoax would have involved shots of Irving hanging around his house in Ibiza talking on the phone or flipping through magazine clippings.

Irving is still around, living on the Pacific coast of Mexico with his fourth wife, still writing and apparently thriving. He's on the Internet at cliffordirving.com. He says while he hasn't yet seen the movie, he has read the script. He calls it a "Hollywood version" of what happened, but he doesn't seem upset about it, probably because he knows that it will probably put a little money in his pocket. If you go to his Web site, you can download the first two chapters of his infamous fake biography of Hughes for free. If you want to read the whole thing, you can download the book as a PDF file, although Irving asks that if you do that you mail a check for $5.95 to his agent in New York.

serendipity gets rich when midway through the film the news breaks about Irving's intended Hughes hoax.

Welles also introduces a (probably) fictional subplot involving his lover (and the film's co-writer) Oja Kodar and her summer romance with Picasso.

While a lot of critics simply didn't get F Is for Fake when it was released - incredibly a lot of them found it incoherent and hastily thrown together. In fact it's masterfully edited, and editing is one of the film's key themes, with several shots of Welles sitting at his editing desk while narrating.

The film provides a signal moment, when, over a montage of scenes of Chartres Cathedral, Welles delivers a brief for the worthiness of humanity:

(I think it's charming that Clifford Irving is employing the honor system to sell his book.)

In The Hoax, Richard Gere plays Irving, which strikes me as pretty good casting. Irving played himself, sort of, in Orson Welles' remarkable 1974 meta-documentary F Is for Fake (which may be better known by its French title Verites et mensonges - "truth and lies").

Often cited as the last film Welles directed (actually the rarely screened Filming Othello was his directorial swan song), F Is for Fake is one of the most bizarre and entertaining movies I've ever seen; it's one of my favorites.

Welles' movie began as a BBC documentary about legendary art forger Elmyr de Hory, and Irving was interviewed for it because he had written a (genuine) biography of de Hory, his neighbor on Ibiza. Welles turned it into a digressive, playful and at times profound essay on the nature of authenticity and the fluid boundaries between art and decoration, between inspiration and imitation.

Assigned the task of making a documentary, Welles instead came back with a revolutionary movie that anticipated not only the now-common mockumentary but forms like Hallstrom's The Hoax that commingle real people and actual events with invented characters and scenarios. And, like most of Welles' films, it could be taken as a kind of veiled autobiography.

Welles was famous for the greatest hoax of the 20th century, the War of the Worlds radio broadcast, and during the movie he introduces the idea (true or not) that he intended to base Charles Foster Kane, the protagonist of his masterpiece Citizen Kane, on Howard Hughes, not on William Randolph Hearst. This idea was rejected by the studio because they thought Hughes too litigious to engage. So the

Ours, the scientists keep telling us, is a universe which is disposable. You know it might be just this one anonymous glory of all things, this rich stone forest, this epic chant, this gaiety, this grand choiring shout of affirmation, which we choose when all our cities are dust; to stand intact, to mark where we have been, to testify to what we had it in us to accomplish. Our works in stone, in paint, in print are spared, some of them for a few decades, or a millennium or two, but everything must fall in war or wear away into the ultimate and universal ash: the triumphs and the frauds, the treasures and the fakes. A fact of life - we're going to die. "Be of good heart," cry the dead artists out of the living past. Our songs will all be silenced - but what of it? Go on singing. Maybe a man's name doesn't matter all that much.

The name "Clifford Irving" may sound a little (or a lot) familiar to you. Or it may not mean a thing.