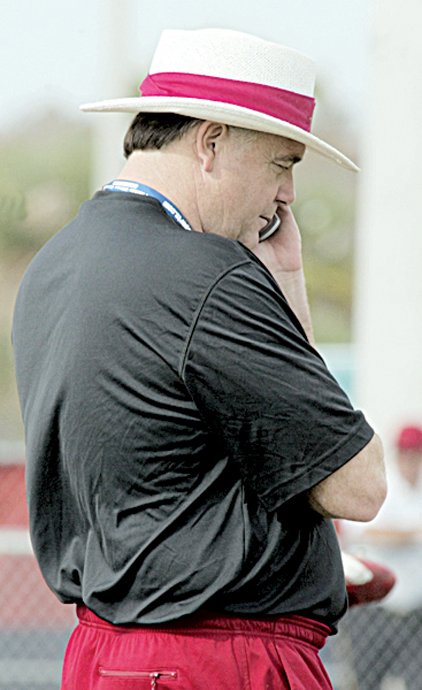 In an open letter, University of Arkansas head football coach Houston Nutt responded to the recent furor over his text messaging activity, saying he "has nothing to hide."

Get the full copy of Houston Nutt's letter

Numerous Freedom of Information Act requests have been made looking into Nutt's phone records, among other things.

In his letter, Nutt says he tried to obtain the content of his text messages, but found out that those records weren't available.

The complete text of the letter:

Recently, unfounded gossip and allegations regarding my private life have occurred on Internet message boards and have been reported by various media outlets. I would like to address those matters directly with the Razorback family.

The speculation and rumors that I have had an inappropriate relationship with Donna Bragg are unfounded and false. Let me be unequivocally clear that the relationship between Ms. Bragg and me is that of a friend and colleague in the community. Any allegation or suggestion that our professional and personal friendship or involvement goes beyond that is false, careless, and purposefully vindictive.

It goes without saying that my wife, Diana, has been deeply hurt by the unfounded allegations. Naturally, she is very disappointed that anyone would even consider for a moment that the malicious rumors are true. Diana's recent communication was her way of expressing her frustrations and showing her support for me during a very trying, emotional time. While she regrets her language may have offended some people, I am confident that fans and the people of Arkansas understand her deep frustration with lies and innuendoes that affect our family.

It is unfortunate that my cell phone records have been combined with unsubstantiated rumors, speculation, and destructive gossip in an effort to create an appearance that the outrageous allegations are somehow based in fact. No matter how many unfounded rumors are initiated by piecing together time lines and phone numbers, the truth remains that I have not had an inappropriate relationship with Ms. Bragg.

When these rumors first arose, I wanted to obtain the content of my text messages and share them with the public because I have nothing to hide. At my request, my personal attorney attempted to find out if the contents of the text messages sent and received from my phone were available from the telephone company. I was disappointed to learn that the records were unavailable.

My communications with Ms. Bragg have concerned her work as a professional fundraiser for a non-profit organization dedicated to providing services to the developmentally disabled, her insights regarding the media, words of condolence and support regarding the loss of my mother-in-law after her battle with cancer, and information relating to her close friend who was diagnosed with cancer. I have learned a valuable lesson through this experience: for some individuals, misguided perceptions are more important than the facts.

It also is important that all Razorback fans know that I did not seek the coaching positions indicated in recent media reports and remain deeply committed to the University of Arkansas. It is true that many coaches receive inquiries throughout the year and inquiries have come to me in recent months without solicitation on my part.

I also have gone on record a number of times about the timing of my knowledge of Teresa Prewett's inappropriate e-mail to Mitch Mustain. Once again, for the record, I had no prior knowledge of that e-mail and promptly reprimanded Ms. Prewett when I learned of the correspondence. I have respect for Mitch Mustain and wish him the very best in the future.

Most importantly, I want to express my thanks and gratitude to the Razorback fans throughout the State of Arkansas and across the country for their support and encouragement in the past and in the future. My staff and I remain committed to our players, our fans, and the Razorback program's tradition of excellence and success. With the conclusion of a strong and successful spring practice, we are looking forward to the start of football season next fall with great excitement.