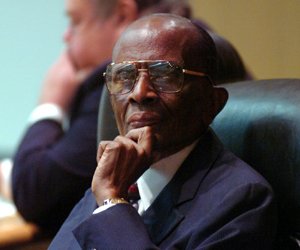 Judge George Howard Jr. is seen in this 2006 file photo. Howard died Saturday at the age of 82.

Cause of death was not immediately available. Howard died shortly after midnight, the P.K. Miller Funeral Home said.

Perhaps Howard's most notorious cases came during the Whitewater saga. Howard presided over the trials of James and Susan McDougal and former Arkansas Gov. Jim Guy Tucker. Susan McDougal and her late ex-husband, James McDougal, were partners with former President Clinton in the failed Whitewater land deal in northern Arkansas. The McDougals and former Gov. Jim Guy Tucker were convicted of bank fraud in May 1996.

Howard was born in 1924 in Jefferson County. He attended Lincoln University in Missouri and the University of Arkansas at Fayetteville, where he received his law degree in 1954. He was not the first black graduate of the law school but he was one of the earliest.

He practiced law in Pine Bluff, made an unsuccessful bid for the City Council in his only political race, and worked with the NAACP, serving as president of the State Conference of Branches.

Howard, who became a federal judge in 1980, said in a 1990 interview that "When I came on board, I made it crystal clear that I was a judge for the people - not the black people or red people or yellow people, but all the people. I am color blind."

But others were not, and Howard sometimes felt it. "When I came aboard, there were those who felt that a black man could not handle this type of power, that the time was not right," he said. "In some people's eyes, the time is never right for minorities ... so when is the time right?"

Being black gave him some insight into the importance of the U.S. Constitution that other judges didn't have, Howard said.

"I sincerely believe that I am in a position to appreciate the value of the federal Constitution," he said. "I'm in a better position to appreciate a litigant's system. A man who espoused causes that related to individuals who were not identified with those who are more powerful in our society - it gave many people a ray of hope that many have always told us was there."

In 1969, then-Gov. Winthrop Rockefeller appointed Howard to the state Claims Commission. After that, Howard went on to serve on the state Supreme Court and the Arkansas Court of Appeals before arriving at the federal bench. He was the first black person to hold each of those positions in Arkansas.

Funeral services have not yet been scheduled.