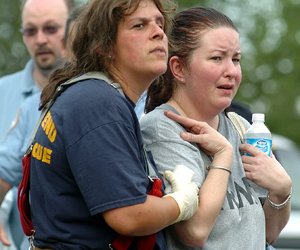 South Bend Fire District 10 firefighter Brenda Caler, left, consoles passenger Amy Corban of Smyrna, Ga. at the scene of a Greyhound bus wreck Monday. Another passenger who grabbed the steering wheel of the bus, causing it to wreck, is in the state mental hospital undergoing evaluation.

Only a plastic half-door separated a Greyhound bus driver from a passenger intent on grabbing the steering wheel of a bus traveling down Interstate 40, bus company officials acknowledged Tuesday.

The doors, installed after passenger slashed a Greyhound driver's throat and caused a crash in 2001 that killed seven people, serve to only offer drivers time to pull over their rigs, company spokesman Anna Folmnsbee said. The shield did not prevent a crash Monday that injured 11 of the 49 people traveling on the bus bound from Richmond, Va., to Dallas, she said.

"It is there to act essentially as a deterrent, for the driver to have a few seconds to pull the bus over," Folmnsbee said. "It acts more as a barrier, not to block to him in."

Troopers at the scene of the Lonoke County crash Monday afternoon initially identified the passenger who grabbed at the wheel as Victoria Combs, 27. Tuesday, state police spokesman Bill Sadler said the woman told troopers she was from Oklahoma, though investigators still were trying to confirm her identity.

Sadler said the woman was being held at the State Hospital as doctors test her "mental capacity to distinguish who she is and where she is," as well as what she remembered from the crash. He said the woman would be there at least a week before being transferred to the Lonoke County Jail.

"There is discussion of criminal charges related to the injuries that were sustained and to the fact that she endangered the lives of individuals on the bus," Sadler said. "However, that will be left to a prosecuting attorney to resolve."

Greyhound installed a "driver shield" on the 55-seat bus, like others in its line, after the company received more than $16 million in grants from the U.S. Transportation Security Administration in 2003, Folmnsbee said. The shields, made of clear, hard plastic, provide a floor-to-ceiling wall for the bus driver's back. A half-gate separates the driver's space from the rest of the bus.

Folmnsbee said having a full gate for the driver might violate federal safety rules requiring unobstructed views and quick access to the rest of the bus. She said the company would conduct its own internal investigation and cooperate with state police.

The fracas involving a Greyhound driver is the first since Croatian Damir Igric, 29, slashed a driver and caused a crash in Tennessee that killed seven people, including himself. The crash shortly after the Sept. 11 terrorist attacks shut down all bus service for several hours and prompted calls to better protect drivers from passengers.

As state troopers continue their investigation, Sadler said the bus drivers and passengers offered conflicting information on where the woman boarded the bus - either in Memphis, Tenn., or Nashville. One passenger told reporters Monday that police officers put the woman on the bus.

Police spokesmen for both cities said a check of their logs, discussions with on-duty officers and dispatch records did not show any evidence of the woman boarding the bus with police accompanying her. Don Aaron, a spokesman for the Nashville police, said the confusion might have come from a uniformed security guard escorting the woman on the bus.

Sadler said a woman possibly matching a description of the one being held was escorted to the bus in Nashville by Greyhound security guards.

Folmnsbee said both city's bus depots employ security guards and the Memphis station has surveillance cameras. She said anything gleaned from those sources would be turned over to troopers, who would release the information publicly.

About 25 minutes before the crash, a passenger said Combs went to the front of the bus and complained to the driver that other passengers were spraying drugs in her face. The driver pulled over at a rest stop and went to the back of the bus to investigate the complaint, but started back down the interstate shortly after.

During the driver's struggle with the woman, the bus went off the road, coming to rest sharply tilted to one side, nearly concealed by thick trees. Passengers restrained the woman until troopers arrived at the scene, about 30 miles east-northeast of Little Rock.

Sadler said none of the injuries from the crash appeared to be life-threatening.