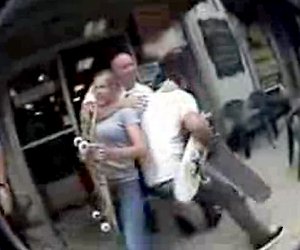 In this image taken from amatuer video, a police officer and skateboarders are seen scuffling on a sidewalk in Hot Springs.

Hot Springs police placed an officer on administrative leave while they investigate an Internet video that appears to show him choking three skateboarders, the mayor said Tuesday.

Mayor Mike Bush said investigators talked with passers-by and business owners who saw Officer Joey Williams stop the skateboarders on a city sidewalk Thursday for breaking an ordinance banning skating in the area. A YouTube video posted Monday shows Williams apparently choking one of the youths after forcing him to the ground, while later chasing and wrestling two others while holding them in a headlock.

"Unfortunately, the video shows it pretty good," Bush said. "I don't condone that sort of stuff and I tell everybody that calls me, we don't know where he was before and during and after this video."

When asked about the officer's conduct, Bush called Williams "one of 100 best and finest we've got" in the city's police department.

The mayor declined to say what the city's next step would be.

"Until the investigation is complete, we really don't know what we're going to do," Bush said.

Williams did not answer a request through the department for an interview and did not respond to a phone message left at a home number in his name.

Police spokesman McCrary Means identified two of those arrested as Matthew Jon McCormack, 21, and Skylar Nalls, 19, both of Hot Springs. Means said McCormack faces a misdemeanor battery charge after purportedly pushing or striking a 67-year-old city employee during the melee. Nalls was cited for skateboarding and faces misdemeanor charges of fleeing and obstructing governmental operations.

McCormack, who works at Hot Springs' Funbox Skateshop, said both he and Nalls were free on $1,000 bond. McCormack said most of the youths remained at home on house arrest.

"It's never been an issue. They made that rule a long time ago, but I've skated down through there all the time and it's never been a problem," McCormack said. "It was kind of shocking for it to be such a huge issue."

McCormack said skaters immediately started shooting the scene with a digital camera capable of shooting video and an Hi8 video camera. The YouTube video, spliced between the two cameras, shows the skaters along Hot Springs' Central Avenue, home to eight bathhouses that figured prominently into the town's popularity in the early 1900s.

Voices in the background can be heard asking Williams why he was arresting the skaters.

"When I tell you to stop and you tell everybody to keep going, that's fleeing, that's disorderly conduct, that's a violation of city ordinance," Williams is heard saying in the video.

Williams later threatened one of teens laying on the ground that he'd spray him with pepper spray if he moved.

McCormack disputed many of the police allegations, especially his battery charge. He said he only pulled on the city employee's arm after the man picked a girl off her feet in a chokehold.

The video on YouTube had been viewed 30,000 times as of Tuesday afternoon.