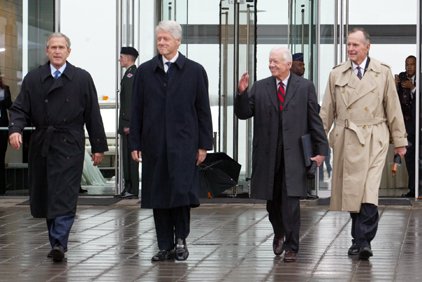 In a stinging rebuke to President Bush, former President Carter on Friday called the current administration "the worst in history" when it comes to international relations.

During a telephone interview with the Arkansas Democrat-Gazette from the Carter Center in Atlanta, the ex-president also accused the current White House occupant of eliminating the line between church and state and of abandoning "America's basic values."

"I think as far as the adverse impact on the nation around the world, this administration has been the worst in history. The overt reversal of America's basic values as expressed by previous administrations, including [those of] George H.W. Bush and Ronald Reagan and Richard Nixon and others, has been the most disturbing to me," Carter said.

The 39th president said that during Bush's two terms in office, he has radically departed from every other U.S. president.