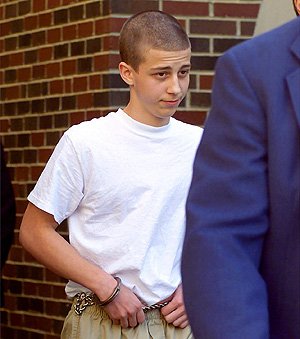 Convicted Westside Middle School shooter Andrew Golden, then 13, is escorted from a back door of the Craighead County Courthouse in Jonesboro in this April 2000 photo.

JONESBORO — Andrew Golden, the younger of the two boys convicted in the 1998 Westside Middle School shootings, turns 21 today and is scheduled for release from federal custody.

The Federal Bureau of Prisons won't confirm this will happen, however, or say where Golden has been held for the past three years. A spokesman said he couldn't discuss the case because Golden was a youthful offender when first incarcerated at age 18.

Craighead County Sheriff Jack McCann said Thursday that he remembered that Golden's grandfather, Doug Golden, had often complained about "having to drive to Minnesota or someplace north" to see Golden in a federal prison.

Subscribers can read the story here on ArkansasOnline.