UPDATED: Gwatney dies after being shot at state Democratic headquarters 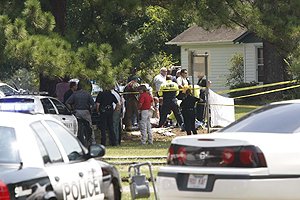 Officials and emergency personnel gather around a wounded man who shot state Democratic Party Chairman Bill Gwatney before leading authorities on a chase that ended near Sheridan when gunfire was exchanged and the suspect was hit. Both Gwatney and the gunman later died from their injuries. ( Staton Breidenthal)

LITTLE ROCK — A gunman shot state Democratic Party Chairman Bill Gwatney at the party's headquarters in Little Rock on Wednesday before fleeing the scene in a pickup, leading police on a chase that ended with a shootout that left the man dead. Gwatney was transported to an area hospital, where he died, police said.

During a news conference at the Little Rock Police Department, Lt. Terry Hastings said that Gwatney, 48, died at 3:59 p.m. at UAMS Medical Center.

The Little Rock police said about 2:30 p.m. that the suspect, identified later as Timothy Dale Johnson of Seracy, was dead after being shot by authorities near Sheridan, around 40 miles south of the capital city.

Later Wednesday, the Conway Police Department released a report that stated a Timothy Dale Johnson of the same Searcy address as the gunman wrote graffiti on the wall of the Conway Target store, where he had been an employee. He was described in the report as "irate."

According to witnesses, Johnson had said he just lost his job. There was no motive for the shootings offered by authorities at a late afternoon news conference.

The shooting occurred in a headquarters office about 11:49 a.m. Wednesday, Hastings said at a hastily arranged news conference right after the shooting.

Hastings said Johnson walked into the state Democratic headquarters and asked to see Gwatney. After being denied entry, went into the office anyway. He fired several shots at Gwatney, hitting him in the upper body.

According to police, Johnson was not a current or former employee of any Gwatney business.

Johnson also flashed a gun in the Arkansas Baptist Convention building downtown after the shooting at the Democratic Party offices, according to witnesses. He left without incident, but police were called.

Police, then apprised of the type of vehicle Johnson was driving, chased Johnson south on I-530 to U.S. 167 toward Sheridan around 12:10 p.m.. 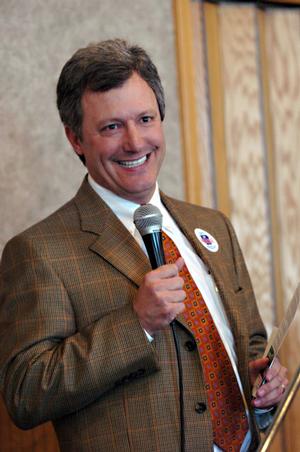 Photo by Michael Woods
Bill Gwatney, Chairman of the Democratic Party of Arkansas, in a Feb. 2008 file photo.

Johnson was able to avoid spike strips and a road block placed near Sheridan but was thwarted by Grant County sheriff's deputies, who rammed his truck to disable it near Little Creek Road and Highway 46.

Then, according to a Grant County sheriff's office spokesman, L. Huey, Johnson fired two shots. Arkansas State Police officers, who also were involved in the pursuit, fired back at him.

Johnson was flown by helicopter to Baptist Hospital in Little Rock, where he later died.

Gwatney, whose family runs a successful auto dealership chain with a flagship lot in Jacksonville, rose to prominence as a state senator from the north Pulaski County town. He was finance chairman for Gov. Mike Beebe's gubernatorial campaign and was urged by Beebe, among others, to seek the party chairmanship.

Gwatney also was a superdelegate to the Democratic National Convention this month in Denver. He owns three car dealerships.

Gwatney is survived by his wife Rebecca; two daughters from a prior marriage, Christian and Chase; and two stepchildren, Zachary and Emily.

Information for this article was contributed by Jacob Quinn Sanders of the Arkansas Democrat-Gazette and The Associated Press.