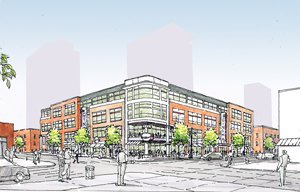 McKibbon Hotel Group Inc. will move the proposed location for its new Aloft hotel in downtown Little Rock to the intersection of Commerce and 3rd streets.

The old site, on the corner of Commerce and President Clinton Avenue, will be used for a four-story mixed-use retail and office or residential complex. The first floor would contain 15,000 square feet of retail. The second floor would have a multi-screen cinema and restaurants. Residential or office space would top the building.

The Aloft hotel, now outside the River Market Design Overlay District, will keep the same plans, seven stories tall with 130 rooms, as well as retail space on the first floor.

Construction on the hotel will start during the fourth quarter of 2009, and it's scheduled to open in 2011. The retail space, which will be co-developed by Moses Tucker Real Estate, will follow a similar timeline, depending on market forces.