Tornadoes touch down in Arkansas, kill 9 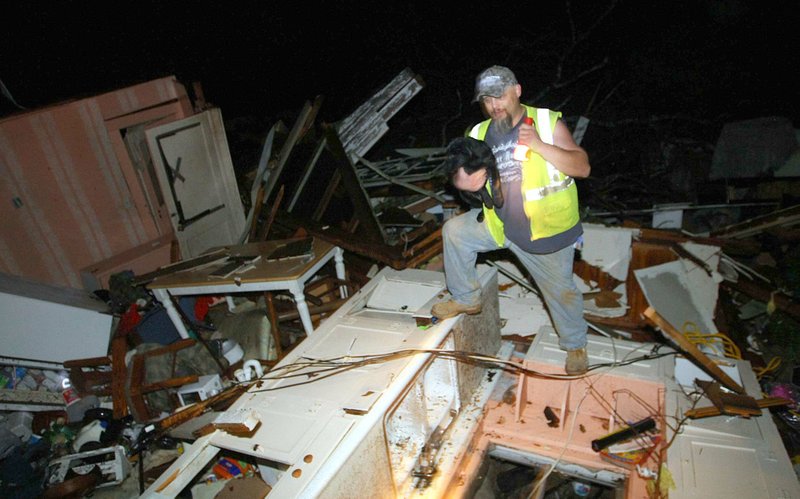 David Derreberry walks across his overturned kitchen sink carrying his newly found dog Susie-Q moments after a good samaritan found her in the rubble of his home along hwy 65 in Clinton Tuesday night. ( Stephen B. Thornton)

LITTLE ROCK — A tornado touched down in downtown Atkins on Tuesday afternoon as a set of strong thunderstorms rolled through Arkansas, reportedly killing nine people.

It was the horrific beginning of a storm system that moved east, killing at least eight others in Tennessee and Kentucky.

An Atkins couple and a child were among the first killed when a tornado cut a broad path through Atkins, one of several twisters to touch down in Arkansas in a rare winter outbreak of violent weather.

Seven fatalities were reported in the state, according Gov. Mike Beebe's office, and another was reported dead in Mountain View. Three people were killed in the Atkins area; one in Clinton; one in Gassville; and two in Conway Coutny.

One man was reported missing.

Beebe said that there would be several "rough days ahead for a number of communities."

His office confirmed three deaths in Atkins, and multiple injuries have been reported in several areas.

Six people from the Atkins area were critically injured and transported to the Russellville hospital.

The storm that hit Atkins continued on to Clinton and Gassville in northern Arkansas, covering about 75 miles.

Elsewhere, there were reports of heavy damage in Clinton, Gassville and Mountain View as the storm system barreled through the north-central section of the state.

There were reports that Union Grove Baptist Church in Pope County was demolished.

Renee Preslar, a spokesman for the Arkansas Department of Emergency Management, said the tornado touched down near Highways 324 and 105, then stayed on the ground and passed into Conway County to the east, leaving splintered houses and tumped-over tractor trailers in its wake.

Preslar said the Red Cross has set up a shelter in Pope County at the Atkins Train Depot.

The Department of Emergency Management said the system stayed on the ground for an extended period of time.

According to eyewitness reports, a church three miles east of Atkins was hit as the tornado carved its path through the small town. Three or four touchdowns were seen, according to people at the scene. Damage near Lake Atkins on Lucky Landing Road included roofs ripped clear off some houses, with homes reduced to almost nothing.

Atkins, a city of about 2,800 people, sits along Interstate 40 about 60 miles northwest of Little Rock.

Trained spotters reported a tornado on the ground near the Conway-Van Buren county line shortly after the tornado was reported at Atkins. Preslar said local officials were trying to assess damage from the tornado.

Spotters also reported seeing a tornado near Gassville and Wonderville in north-central Arkansas. Initial radio traffic from Baxter County sheriff's deputies said several people were injured in Gassville, as well as debris and "houses" blocking Highway 62 through the center of town. The injuries could not be confirmed

Also in Gassville, there were reports of gas line leaks and debris everywhere, as well as flooding. The downtown area has been closed, reports said.

In Newton County near Mt. Judea, a tornado touchdown was reported but not confirmed. There were no damage reports.

An Arkansas State Police dispatcher said multiple car crashes slowed traffic on Interstate 40 near Atkins to a crawl. A tractor-trailer reportedly blew over in an eastbound lane of the interstate between Atkins and Blackwell.

Injuries also were reported in Cleveland and Hattiesville. And a boat factory in Van Buren County has collapsed because of high winds, according to reports

The system appeared to be heading east toward Clinton.

Goudsward also said a tornado was sighted near Mountain Home.

By mid-afternoon, the National Weather Service had issued tornado warnings for Desha, Johnson, Marion, Baxter, Newton, Perry, Pope, Searcy and Yell counties as the storm system moved over the state.

The weather service's office in Jackson, Miss., reported damage from high winds at 3:30 p.m. near Arkansas 425 close to Ashley. Preslar said local officials looked at the Ashley County damage and couldn't confirm it came from a tornado.

In Benton County, the weather service said several large trees had been blown down north of Gentry.

The storms were being caused by the meeting of a cold front with warm, moist air that has covered the state for days. Temperatures reached the 70s in parts of Arkansas on Tuesday, with lows forecast in the 20s for parts of the state behind the front.

The weather service's station in Jackson, Miss., reported the damage near Arkansas 425 from the high winds at 3:30 p.m. In Benton County, the weather service said several large trees had been blown down north of Gentry.

The storms were being caused by a cold front that met with warm, moist air that has been over the state for days. Temperatures reached the 70s in parts of Arkansas on Tuesday, with lows forecast in the 20s for parts of the state behind the front.

A tornado watch is in effect until 7 p.m. for parts of southwest Arkansas, including Howard, Little River, Miller and Sevier counties.

After the cold front has passed through, low temperatures early Wednesday should be in the 30s, the weather service said, followed by lows in the 20s early Thursday morning.

Stay with ArkansasOnline for the latest breaking weather news.