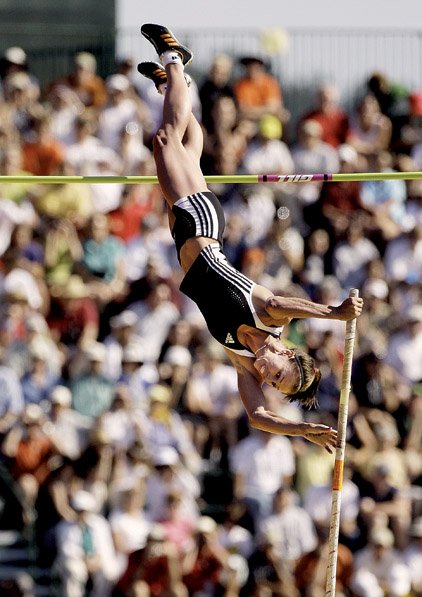 After clearing 15 feet, 1 inch to take second in the U.S. Olympic trials, April Steiner-Bennett said she probably will need to increase that height to the 15-8 range to win a medal in Beijing.

LITTLE ROCK — FAYETTEVILLE - April Steiner-Bennett has renewed her contract to continue teaching physical education at Hellstern Middle School in Springdale this year, but she'll be requesting an excused absence for the first few days of class.

She's got a good excuse.

Hellstern begins classes Aug. 18, which also is when the women's pole vault final at the Summer Olympics will be held in Beijing.

Steiner-Bennett, a four-time All-American at Arkansas from 2001-2003, plans to be vaulting in the final after making the United States Olympic team.

She cleared 15 feet, 1 inch to take second at the U.S. trials last Sunday in Eugene, Ore.

It will be the first Olympics for Steiner-Bennett, who took fifth at the 2004 U.S. trials.

She laughed when asked which was a bigger accomplishment - making the U.S. Olympic team or winning the Fear Factor competition on the NBC television show in 2004?

"The Fear Factor thing was so I could train to make the Olympic team," Steiner-Bennett said, referring to the $50,000 prize she earned. "This is a childhood dream that has come true.

"Now I want to compete well there. That's the next goal."

Steiner-Bennett, who has a career-best of 15-2 1/2, said she'll likely have to jump in the 15-8 range to have a shot to win one of the top three spots and an Olympic medal in Beijing.

"We've got a lot to do the next five weeks and figure out how to get to that next 5 inches to make the medal stand," Steiner-Bennett said of training sessions with Lady Razorbacks field events coach Bryan Compton. "I really want a medal.

Compton, an Arkansas assistant since 1998, said it's realistic for Steiner-Bennett to increase her clearance by 5 or 6 inches for the Olympics.

"That's what we've been trying to do all year."

Then, Erica Bartolina cleared 14-11 to take over second, pushing Steiner-Bennett to fourth, one spot shy of making the Olympic team, behind Jillian Swartz, who had cleared 14-9 1 /2 with no misses.

"When she made it, I tried not to think, 'There goes my spot,' " Steiner-Bennett said. "I just said, 'All right, you've planned for this, you've worked hard to keep this bar up there, you've been pretty consistent at it in practice and meets, so just keep doing what you've been doing.' "

Steiner-Bennett then cleared 15-1 on her second attempt to move into second. Jennifer Stuczynski won at 16-1 3 /4, with Bartolina staying in third at 14-11 after Swartz missed all three attemptsat 14-11.

"We were trying to save as much energy as we could and not jump too many bars," Compton said of passing at 14-11. "Then you are sitting there as a coach and all of a sudden she misses one and is in fourth.

"We call it the passing game. You try to guess what everybody else is going to do and take your own risk. But we were jumping as well as anybody, and we saved the big jump for last."

Steiner-Bennett said it was a thrill seeing the look on Compton's face after she cleared 15-1.

"It was really, really priceless,just looking at him and how excited he was," she said. "He was on the front row of the coaches' box, and I thought he was going to fall over the railing.

"I was like this big ball of energy that had been released, screaming and jumping around."

Making the U.S. Olympic team gives Steiner-Bennett an elevated status on the track and field circuit, but she has no plans to stop teaching at Hellstern Middle School.

"The teaching thing is my outlet," she said. "It keeps my mind off the track and off practice."