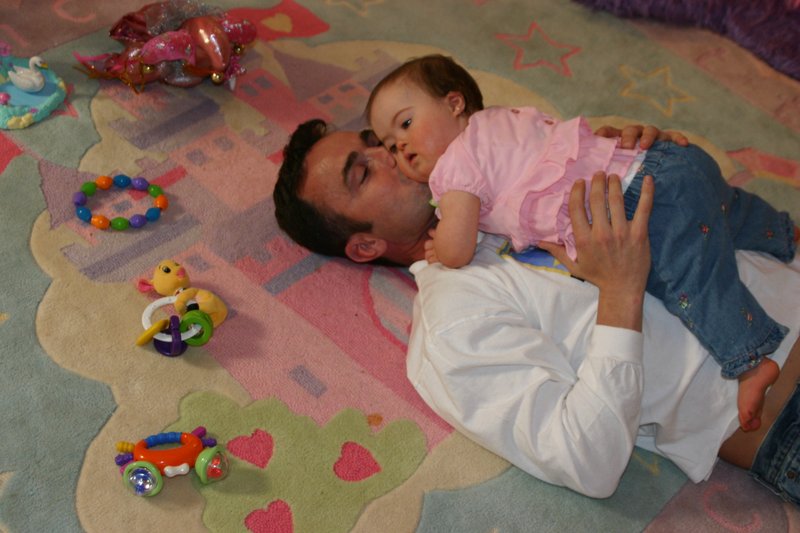 Heath White and his daughter, Paisley, before he 2008 LR Marathon.

His youngest daughter was never far from Heath White's mind as he participated in Sunday's Little Rock Marathon. That's because 11-month-old Paisley was with him every step of the way.

The 26.2-mile run marked the first official race for the father-daughter team from Waskom, Texas. For 33-year-old Heath, who has competed in eight marathons, it marked a memorable comeback to the sport after more than a year-long absence.

This time last year, Heath wasn't sure whether he'd run again. His wife, Jennifer, was about to give birth to the couple's youngest child, Paisley, who during prenatal tests was diagnosed as having Down Syndrome.

Get more information about the Little Rock Marathon! See race maps, register, see past photos and videos. Submit YOUR race video or photos to be highlighted on Arkansas Online.

The Whites found out 13 weeks into Jennifer's pregnancy that their unborn baby could have the condition because soft markers indicated it was likely. Then around Christmas 2006, after going to a specialist for an amiocentesis, it was confirmed.

The diagnosis shook them to the core.

"It was extremely difficult, and that's putting it lightly," Jennifer White says. "It's like your whole world comes crashing completely down" when you receive the news.

Heath took the news particularly hard in the beginning, he admits. Being a pilot and an athlete, Heath was used to pushing himself toward perfection.

"At first, I was worried about how [her condition] reflected on me," Heath says. "I run, I'm healthy, [so] how could this happen?"

But now, he sees it in a different light.

"I think about how it reflects on me, that I can run and promote her," he says.

A football and baseball player in high school, Heath took up running in college at Northwestern State in Natchitoches, La.

"I was legendarily slow in high school, so it wasn't until I found long distance that I became a runner," he says.

After college, he started participating 5Ks. Those progressed into 10Ks, and then into marathons.

His second go around at the Little Rock Marathon, Heath qualified for Boston, where he finished 942nd out of a field of around 22,000. Encouraged, he kept running.

As his biggest backer, Jennifer has always traveled with Heath to races. At one of the first Little Rock marathons, Jennifer was eight months pregnant with Pepper, their first child. To surprise Heath that year, Jennifer stood at mile 23, and as he ran by, she lifted her shirt to reveal a special message scrawled in red lipstick. "GO DADDY GO," her big belly boldly cheered.

And so with Jennifer's unwavering support, Heath knew after Paisley's birth that he could get back into marathoning. This past Christmas, he went on a long run. It felt good, he says. So good that he was confident that he could do three months of training for the 2008 Little Rock Marathon.

But he wasn't content to run it alone this time. What he wanted, more than anything, was to have Paisley there with him.

When Paisley was born March 16, 2007, she didn't experience a lot of the problems that typical Down Syndrome newborns have. She does have a hole in her heart that will require open-heart surgery.

Heath says Paisley is developing just like a typical child would, just a little bit behind the normal timeline.

"She smiles, she loves," he says, bouncing a giggling, gurgling Paisley on his lap. And now she'll add "running" to her list of activities, ahead of walking.

Of course, Heath first had to figure out how to run a marathon with a baby in tow. He spent weeks trying to come up with the perfect way to transport Paisley.

He worked in his dad's garage on converting a bike trailer into a rickshaw-type device. Eventually, he opted for a jogging stroller.

Pepper, now 3, was the test pilot for her daddy's inventions. But when it was cold, he ran pushing an empty stroller. When the temperatures got a little higher, Pepper joined him on the 4-hour training runs. The extra weight helped Heath adjust his running so that he wasn't exhausted at around the 20-mile mark, the make it or break it part for many marathoners.

With Paisley on board for the marathon Sunday, Team White is taking every precaution. That includes a rain cover, a radio, diapers, a bottle, and snacks for daddy, naturally.

Heath says that in previous runs, Paisley is usually conks out a half-mile in. Whether that will be the case during the excitement of their first marathon is anyone's guess.

Heath received permission from race co-director Geneva Hampton to run with the stroller, which isn't permitted in USATF sanctioned race events. When Heath told her about his situation and his mission, she was completely on board with the idea.

So was Heath's family, who will be sporting T-shirts for Team White.

In addition to her race number, Paisley has a special outfit just for the occasion. So does daddy, whose shirt proclaims "My daughter is downright spectacular."

While this might not be the most memorable race for infant Paisley, who may wind up sleeping through it all, it's certainly one her parents will never forget.

Initally, his return to running was therapeutic just for Heath. Now it has taken on a much larger meaning. He doesn't know how far he and Paisley go with it or just how many more races they'll enter. But one thing is for certain in Heath's mind.

"This is my way of letting everyone know I'm proud of her."