Liquidation warehouse gets in gear 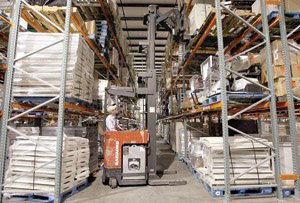 Liquidity Services Inc. employee Chris Bass loads a pallet of filing cabinets onto a shelf at the company's warehouse.

Another pallet holds a miniature all-terrain vehicle and other playthings suitable for small children.

And somewhere out there online, entrepreneurs are evaluating whether and how much to bid for these bundles, which they likely will split up and sell online individually.

The warehouse is part of the operations of Washington-based Liquidity Services Inc., which boasts of an online bidding pool of 1.2 million potential buyers of merchandise that has been liquidated, returned to retailers or otherwise found its way into the salvage and surplus market.

"It's a huge market with huge opportunities," Cayce Roy, president of the asset recovery division for Liquidity Services, said during a walk-through of the company's 86,000-square-foot Bentonville warehouse. Liquidity Services moved into the Northwest Arkansas market a year ago with 50,000 square feet of warehouse space.

"A lot of this stuff in the past might have ended up in landfills," he said. "We are really creating value."

Roy said business has picked up at the company's warehouses across the country as the economy has weakened. Most of thebuyers, he said, are individuals - perhaps out of work, or working for less - who will resell their bundled packages as individual items on eBay, Amazon.com or some other online commerce Web site.

And with retail storefront space increasingly available during the recession, he said, some self-employed people such as TV repair technicians are signing bargain-rate leases and expanding into sales.

Electronics at the warehouse are inspected before being posted for sale and get labels such as "power OK, frame OK, screen OK." Roy said the company is exploring whether to offer warranties on some products.

Liquidity Service's stock price has nearly doubled since bottoming out below $5 in March on the Nasdaq exchange. In addition to its commercial business, the company has contracts with the U.S. Department of Defense to liquidate surplus materials.

Shawne Milne, an analyst with Janney Montgomery Scott LLC in San Francisco, said in a recent research note that the commercial side of Liquidity's business is likely to drive the company's growth in the next two to three years.

"We believe consumer 'trade down' is helping fuel end-market demand from resellers such as Family Dollar," he said in the report.

And analyst Gary Prestopino with Barrington Research in Chicago wrote in a research note that the stock's sharp fall after release of its first-quarter results in February presented a buying opportunity. He noted that, despite the disappointing results, the company's balance sheet remained debt-free with cash and equivalents of $53 million.

The Bentonville warehouse, which employs 25, is not typical of the company's operations. Located in the hometown of the world's largest retailer, Wal-Mart Stores Inc., upwards of 80 percent of the warehouse's inventory is capital assets such as forklifts, pallet jacks, shopping carts, shelving - stuff that's used to run or remodel retail stores.

At other locations, products originally destined for retail make up the majority of inventory, and up to 40 percent of the goods sold are picked up by the buyers onsite.

In addition to Bentonville, Liquidity Services has commercial warehouses in Cranbury, N.J.; Indianapolis; Dallas; Fullerton, Calif.; and Sacramento. It also has warehouses for the Defense Department business in Oklahoma City and Columbus, Ohio.

Overseas, it has warehouses in Stafford and Milton Keynes, both in the United Kingdom, and in Schwaig, Germany.

A sampling last week of what was for sale at the company's auction site, www.liquidation. com:

One hundred women's apparel items from designers such as Liz Claiborne, Tommy Hilfiger and Alfani stood at the opening bid of $1 apiece at a Virginia location with more than a day remaining to bid.

An already closed auction of power tools from Dewalt, Bostitch, Wagner and others with a total manufacturer's suggested retail price of $2,564.68 sold for $650 at an Indiana warehouse.

A Missouri store owner said he has participated in Liquidity Services' online auctions for two years, traveling to warehouses in Indianapolis and Dallas and, for the past year, Bentonville. He declined to be identified because he did not want to give competitors any insight into his business.

Regular auctions typically take hours, he said, but the online auction has predetermined beginning and end times. And, he said, he finds better deals than he could elsewhere.

"You can get larger volumes of stuff. That's a big plus for me," he said.

Liquidity Services is rebounding from a sharp drop last year in the Defense Department side of its business.

Prices for scrap metal fell sharply last year as the recession began taking hold. For the first quarter, which ended Dec. 31, of the company's current fiscal year, Liquidity Services reported net income of only $2,100 on total sales volume of $82.1 million.

The company cited a 45 percent drop in its scrap metal business as a result of falling commodity prices.

Company spokesman Julie Davis said much of the metal salvage traditionally has gone to China, where growth in construction slowed last year. The company renegotiated its contract with the Defense Department to reduce the amount it pays for metal by 45 percent.

On the commercial side of the business, the company reported that retailers held on to and sharply discounted merchandise that otherwise would have moved into the secondary market, reducing the supply of goods available to sell on its online auction site.

"In this environment, cash is very important to them," Davis said.