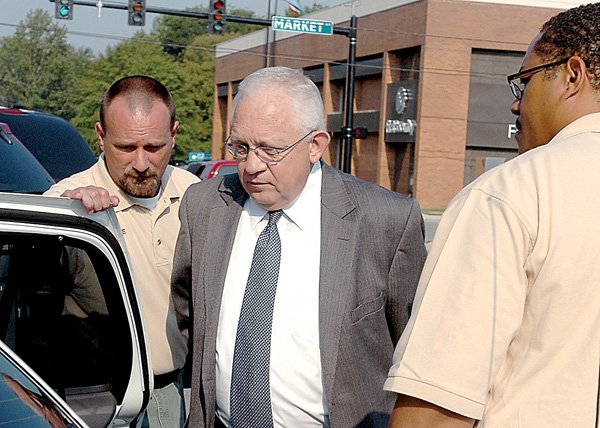 David Pierce (center) is led into a police car Thursday by bailiffs Jake Postema (left) and Kevin Wiley outside the Saline County Courthouse, where the former Baptist music minister pled guilty to charges of sexual indecency with a child.

BENTON — A former music minister at a large Baptist church pleaded guilty to sex charges Thursday, ending what authorities say was years of abuse of teenage boys in the church's youth choir.

David Kent Pierce, 57,pleaded guilty to four counts of sexual indecency with a child. The plea concerning three young men who were teenagers when Pierce told them to expose their genitals.

As part of a plea deal, Pierce got a 20-year prison sentence with 10 years suspended, meaning he could be eligible for parole in 18 months.

He will have to register as a sex offender.

Prosecuting Attorney Ken Casady said the young men whose complaints were the basis of the prosecution, and older men who came forward with similar stories of abuse, are "still dealing with psychological issues." "They were prepared to testify and face David Pierce," he said. "None of them looked forward to going to court."

Authorities described two decades of abuse of an unknown number of teenage boys, whom Pierce "groomed" when they were young.

As they grew older, he would introduce them to various sexual situations, such as looking at pornography and talking about sex.

At puberty, Pierce would start asking the boys to expose their genitals so he could take measurements, which he called "charting," investigators reported.

In some cases, Pierce and the youths would fondle themselves in front of one another, investigators said.

Pierce offered no apology or explanation as he appeared before Circuit Judge Grisham Phillips. White-haired and wearing glasses and a gray suit, Pierce quietly answered questions, saying just "yes, sir" as his wife and children looked on.

After the hearing, Pierce's attorney, Mark Hampton, read a statement from Pierce that included an apology "to every person affected by my actions."

"It was never my intention to hurt anyone," the statement said.

In an April letter to church officials, Pierce acknowledged the "sinfulness and immorality of my past behavior," but said he did not "engage in actual sexual contact."

Saline County Sheriff Bruce Pennington, who belongs to the church along with three circuit judges, the prosecutor and many other community leaders, said church members had no concerns about Pierce before a 17-year-old came forward in April.

The abuse stayed quiet in the 2,200-member church in part because Pierce was careful about whom he targeted, choosing boys that he could psychologically manipulate, prosecutors and investigators said in interviews.

One former youth-choir member described in an interview "systematic brainwashing" that started innocently with questions about how the boys were doing "socially, scholastically, spiritually and sexually," with the talks eventually emphasizing the sex part.

Pierce called it "discipleship" in surrounding himself with boys who were spiritual leaders in the church - boys who were good students, from good families who trusted their minister - said a former church member who agreed to an interview as long as his name was not revealed.

He said that after years of silence he felt compelled to tell church leaders and police what happened, hoping to ease the guilt he felt from knowing other boys had been subjected to the same abuse.

"I had been dealing with it by myself long enough," he said.

The man said he learned as an adult that his parents had talked about all the attention Pierce was beginning to pay to him.

"They came to the conclusion, 'Who are we to question that a great man of God wants to take interest with our child?'" the man said.

The man is now married and attends church elsewhere.

Casady, the prosecutor, said the church was cooperative with the investigation, which moved fast, as young men came forward sharing similar stories.

He said investigators found DNA evidence in Pierce's church office and at the bell tower that helped corroborate the young men's accounts. Healso said they found some "unsettling" photos of young boys.

None of the victims was in court Thursday. Neither were First Baptist's ministers.

The church's former pastor, Greg Kirksey, who is now at the Church at Rock Creek in Little Rock, attended.

He was one of several who wrote letters asking for leniency.

"I fully recognize that David's conduct is not only immoral but illegal," he wrote. "It is sick, twisted, and perverted, and frankly it angers me greatly."

However, he wrote, "I am afraid if David is sent to prison he will never come out alive."

He has a heart condition and diabetes, Kirksey wrote, and "you and I know that onceother inmates know what his charges are, he will be a target in prison."

Kirksey wrote that he had talked to at least "two of the 'victims' in the Pierce case and both plan on writing you a letter, along with several other young men who were involved, to ask that David not be sentenced to prison."

First Baptist's pastor, the Rev. Rick Grant, issued a statement saying it was hard to see a friend, mentor and a colleague "end up in this kind of circumstance."

"I'm also sad for the victims in this ordeal - young men and their families who trusted David as a teacher and leader."