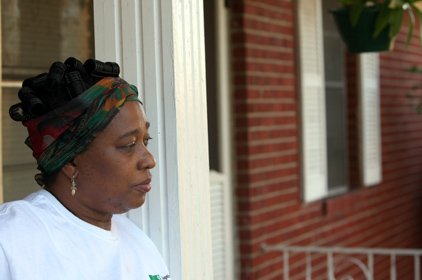 LITTLE ROCK — Last in a series

Jackie Cooney never gave up hope that her daughter Carmeletta Green was alive.

She had, however, given up on police ever finding Carmeletta.

Investigators had suspected that Jackie’s ex-husband, Kenneth Cooney, and his nephew Larry Cooney abducted Carmeletta while her mother worked the night shift at a pizza parlor in September 1982.

But 25 years passed without an arrest or word about Carmeletta’s whereabouts.

So, in the summer of 2007, when Jackie heard that Kenneth lay dying of cancer in hospice, she visited him.

This is part 6 of a 6-part series. View all stories here as they become available.

Jackie, worn from years of not knowing what happened, stood at his bedside and begged Kenneth for answers.

I told you I didn’t know, Kenneth responded. 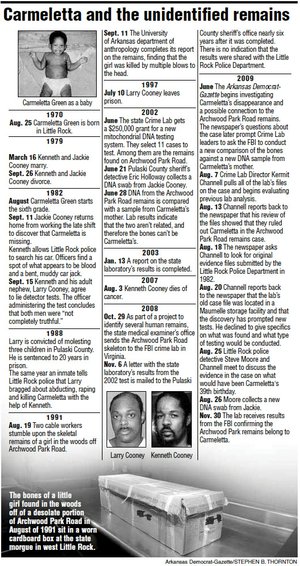 Before she could push further, Larry’s mother interrupted them and told her to leave.

Larry’s mother claimed that Jackie was hiding Carmeletta - something even police had asked Jackie about in 1982 - and that Larry was being wrongly accused.

You’ve got my son mixed up in everything. I want you to leave him alone.

Though Jackie had never really considered Larry a suspect, police always had. His convictions for child molestation a few years after Carmeletta disappeared fueled investigators’ suspicion that Larry and Kenneth had abducted and killed Carmeletta.

Jackie felt that the truth died with him.

Among the remains was the partial skeleton of a girl found in 1991 in a wooded area off Archwood Park Road in southern Pulaski County. To Edwards’ knowledge, it was the only dead child in Arkansas without a name.

He hoped to change that.

After taking an inventory of the remains, Edwards shipped portions of each set either to the University of North Texas or to the FBI for mitochondrial DNA analysis.

The state Crime Lab had shuttered its own mitochondrial DNA program in 2003 for lack of funding. Before doing so, however, the lab had compared the DNA of the Archwood Park Road skeleton with Jackie’s DNA.

But this summer, the Arkansas Democrat-Gazette began asking Edwards and Crime Lab Director Kermit Channell about the similarities between Carmeletta and the bones of the girl found in the woods.

Carmeletta, who is black, was 12 when she disappeared.

Anthropologists determined that the bones belonged to a black girl between ages 9 and 12.

Both the unidentified girl’s remains and Carmeletta had several fillings in their teeth.

And the bones were found only about 4 miles from Carmeletta’s house.

Channell had been the director of the lab’s DNA section when the 2002 DNA test was done. He had supervised the work but did not conduct the test himself.

Though the nationally accredited lab’s DNA testing record is impeccable, a growing sense of doubt about the original comparison began to nag at Channell.

“You have to sit back and scratch your head,” he said recently. “This is a very odd coincidence. All these similarities, it should make anyone think, ‘Is this who it is?’”

As a DNA expert with almost 15 years in the field, he knew that contamination was so common in mitochondrial DNA testing that analysts are trained to look for signs that a lab worker or police officer’s DNA made its way into the sample.

Channell also knew that officers who swab the cheeks of relatives to obtain samples often don’t have training to do it properly.

When he reviewed the file this summer, Channellnoticed that the swab taken from Jackie in 2002 produced an unusually low amount of DNA. Done correctly, swabs typically produce a considerable amount of DNA to work with.

“I really started having some doubts,” he said.

Had he misread the test? Or had there been something wrong with the DNA sample an officer had gotten from Jackie seven years earlier?

Though they had no obligation to do so, Channell and Edwards asked Little Rock police detective Steve Moore to get a new DNA swab and blood sample from Carmeletta’s mother.

“The big picture is that it’s not about me or the lab,” Channell said. “You have to do what’s right.”

In late August, the sample was sent to the FBI lab for a comparison with the Archwood Park Road bones.

By then, Moore had transferred to a joint terrorism task force. Wanting to find out what happened to Carmeletta, he began working on the case again as his task force job allowed.

“Even though [this case] slipped through the cracks, we’re trying to get it out,” Moore said recently.

Though Moore had gotten the DNA sample from Jackie during the summer, he doubted that anything would come of a new test, because of the 2002 test results.

How we got this story

As part of a six-month investigation, the Arkansas Democrat-Gazette interviewed 38 people and reviewed dozens of court and police documents to tell Carmeletta Green’s story.

Details about the day Jackie Cooney visited her ex-husband came from several interviews with her. Information about the state Crime Lab’s efforts to identify remains, specifically the ones found off Archwood Park Road, came from lab director Kermit Channell; from Chris Edwards, unidentified remains coordinator for the state medical examiner; and from the National Missing and Unidentified Persons System.

The bones were Carmeletta’s after all.

Moore told Jackie the next morning.

Though she’d had 27 years to prepare for that moment, his words hit Jackie like a punch in the stomach.

Her baby ’Letta was dead.

Police have officially classified Carmeletta’s case as a homicide, and Moore is actively pursuing leads.

Channell is working to figure out what went wrong with the 2002 test. He also is reviewing the dozen or so other mitochondrial DNA tests the lab conducted during the brief period it used the tool to identify remains.