27 years of wondering put to rest 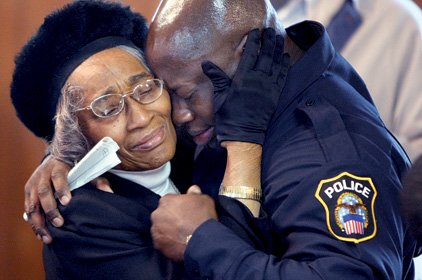 LITTLE ROCK — When Jackie Brown walked into the small church on Cross Street on Saturday morning, her oldest daughter was finally with her again after 27 years.

The ashes of Carmeletta Green, who disappeared at age 12, were in a polished cherry wood box engraved with the picture of a little girl with angel wings.

Now a grandmother 11 times over, Jackie sat on a worn pew surrounded by family as Carmeletta’s memorial service stretched from morning to afternoon.

On the pew with her were her mother and her children, including her oldest son, Orlando Green. Orlando, who had flown in from New Jersey for the service, wore his police uniform and held his 4-year-old daughter in his lap.

He and Carmeletta had been close, born just a year apart.

Orlando was 11 when someone took Carmeletta from the family’s Little Rock home while Jackie was working the late shift at a pizza parlor. She was taken from the same bedroom where Orlando and the three younger siblings were sleeping.

More on the disappearance

For decades, the family had no idea where Carmeletta was or if she was alive. In late November, a DNA test confirmed that a set of human remains found in 1991 in woods off Archwood Park Road belonged to Carmeletta.

Little Rock police recently classified Carmeletta’s death as a homicide and are actively pursuing a suspect.

But on Saturday, no one spoke the suspect’s name. Instead, they talked about Carmeletta’s bright smile and her big heart.

Nearly 100 people attended the service, many of whom had watched Carmeletta grow up and a few who learned about her only last week through a series ofnewspaper stories.

All arrived to support her grieving mother.

When the pastor gave mourners a chance to speak, several people walked to the front of the sanctuary and turned to Jackie and her mother, Ruth Budd.

“This baby who left us back in 1982 touched many lives. She taught us all how to love,” said Rhonda Stewart, a distant relative. “The fact that you all are here today to celebrate the life of ‘Sissy’ tells us the love she had is here almost 28 years later.”

Ann Whitmore, who has known Jackie’s family for years, urged the family to be strong and to celebrate Carmeletta’s short life.

“I watched Jackie suffer year after year from not knowing where her child was,” Whitmore said. “You don’t have to look at every child and wonder how your daughter is or where she is.

“Words cannot express what we’re feeling,” Hubbard said. “One thing is for sure, is that closure can come today.”

The crowd responded with “yes” and “amen.”

It’s “something that we’ve waited for such a long time,” Hubbard said.

Information for this article was contributed by C.S. Murphy of the Arkansas Democrat-Gazette.