Girl’s remains identified, but questions go back to 1982 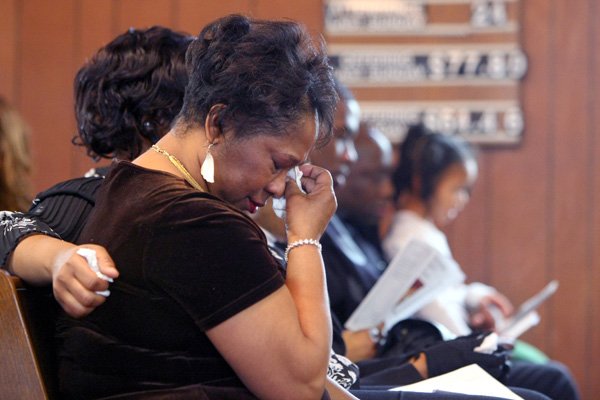 Jackie Brown wipes a tear Saturday as she is joined by 100 mourners at a memorial service in Little Rock for her daughter, Carmeletta Green, who had been missing since 1982. Carmeletta’s skeletal remains were not identified until Nov. 30 this year.

LITTLE ROCK — The 27-year-old mystery of Carmeletta Green’s disappearance haunts not only her family, but Little Rock police and state Crime Laboratory officials.

Carmeletta vanished from her Little Rock home in 1982 at age 12, but her skeletal remains were not identified until last month.

In the intervening years, the police file on her case was lost, physical evidence was destroyed and an initial DNA test conducted in 2002 indicated that a skeleton found in Pulaski County in 1991 was not Carmeletta.

More recent tests confirm that it was her.

Her mother, Jackie Brown, and three of Carmeletta’s siblings expressed anger in an interview Friday that authorities seemed to dismiss the girl’s disappearance.

More on the disappearance

“To me, it was neglect,” said Carmeletta’s sister Kencia Stanley, who was 5 when Carmeletta disappeared.

The two men identified as suspects haven’t been questioned since 1982. One died in 2007, 16 years after the skeleton was discovered. The other, convicted in 1988 of molesting three children, has been living freely since his release from prison in 1997.

“We’re going to do everything we can to catch the person who did this, quickly,” he said. “We know there are people who know what went on. If you know what happened to Carmeletta Green, you have a responsibility to tell us about it.”

Even if the killer is dead, Hastings said, “We still need to know. We need to get an answer to her family.”

One thought that troubles Carmeletta’s family is that until last week, her skeleton rested in a cardboard box in the basement morgue of the state Crime Lab.

The bones were packed into the box in 1991, shortly after cableworkers discovered them. Investigators suspected that those bones belonged to Carmeletta, but DNA tests weren’t available back in 1991. Efforts to identify the skeleton using dental records were unsuccessful.

The Crime Lab conducted a mitochondrial DNA test in 2002 and concluded that the bones did not belong to Carmeletta.

But because of a clerical error, the results were not shared with police for more than six years.

Those test results surfaced after the Arkansas Democrat-Gazette began asking Crime Lab Director Kermit Channell this summer about the similarities between Carmeletta and the bones of the girl found in the woods.

Channell conceded in June that the similarities were striking. Both were black girls, and the skeleton was deemed to be between 9 and 13 years old. The bones were found about 4 1 /2 miles from Carmeletta’s house.

After the newspaper questioned the 2002 results, Channell asked the FBI to conduct its own test, a move that placedhis lab’s work into question.

When the FBI confirmed on Nov. 30 that the 1991 remains indeed belonged to Carmeletta, Channell had mixed feelings. He was glad to finally have answers for the girl’s family but intent on figuring out what went wrong with his lab’s analysis.

The lab conducted 11 mitochondrial tests before that section was shut down in 2003 because of a lack of funds.

“We’ve gone back to every case we processed during that time period and reviewed every one of them,” Channell said.

A mitochondrial DNA test compares DNA from bones with DNA from the mother of the missing person. In this case, Jackie Brown’s DNA was collected for comparison in 2002 for the state lab’s work and this summer for the FBI’s new test.

Channell was relieved to learn that the state lab’s analysis on the bones, the more difficult DNA to extract, was identical to the FBI’s results.

“It’s the exact mitochondrial sequence that the FBI maintained,” he said.

The problem, Channell concluded, was with the DNA sample taken from Brown in 2002 by a Pulaski County sheriff’s detective.

Contamination is so common in mitochondrial DNA testing that analysts are trained to look for signs that a lab worker or police officer’s DNA made its way into the sample.

When Channell reviewed the file recently, he noticed that the swab taken from Brown in 2002 produced an unusuallylow amount of DNA. Done correctly, swabs typically produce a considerable amount of DNA.

Channell also checked to make sure that no DNA from lab employees contaminated Brown’s sample. It had not.

In addition, he found no evidence that Brown’s sample was somehow switched with someone else’s.

The likely source of contamination, he concluded, was from someone who handled Brown’s DNA sample before it was submitted to the lab.

“It’s not from the examiners, and it’s not from another case,” he said. “And it’s not interpretational error. That tells me it’s from an outside, unknown source.”

Protocols for swabbing cheeks for DNA have advanced in recent years to prevent contamination. Not long ago, though, detectives let swabs dry by inserting them into a hole punched into a styrofoam cup, leaving the swab vulnerable to contamination.

Channell said his review of the lab’s other mitochondrial DNA cases revealed no evidence of errors.

“I feel confident in all of the cases,” he said.

Analysis from only two of the 11 cases conducted at the state lab were used in criminal trials, Channell said. In those cases, FBI tests confirmed the lab’s results.

Although several agencies contributed to delays and missed opportunities in Carmeletta’s case, her family pins the bulk of culpability on the Little Rock Police Department.

Police spokesman Hastings said the original case file, categorized as an “attempt to locate” call in 1982, was likely misplaced or mistakenly destroyed.

“The way records were kept in the ’80s and the way we keep them now is different,” he said.

Evidence collected in the case was destroyed.

The department now has formal protocols stipulatingwhen files and evidence can be destroyed.

Hastings said subsequent investigators have been able to piece together most of the informationthat was likely in Carmeletta’s original file.

But Little Rock detective Steve Moore, who investigated the case in 2003 and is now pursuing leads in it again, wasn’t aware of at least one document that was likely in the original file.

He learned only last week that the state Crime Lab issued two evidence reports soon after Carmeletta’s disappearance. One report, dated Sept. 22, 1982, confirmed that a substance found in one suspect’s car was human blood.

Detectives who worked the case in years past didn’t recall ever getting analysis back from the lab and cited the lack of blood evidence as a hurdle in making an arrest.

The department likely will use Carmeletta’s case to train future detectives, Hastings said. Her case illustrates that future technology could someday make evidence vital that once seemed inconsequential.

“Law enforcement is an evolving thing,” Hastings said, explaining that detectives in 1982 couldn’t have predicted that blood DNA could be used to solve crimes.

Hastings’ assurances, however, give little comfort to Carmeletta’s mother and her siblings.

“This is a 12-year-old girl. Why nobody cared to know where she was is beyond me,” Carmeletta’s sister Kencia Stanley said.

“It wasn’t dealt with right,” she said. “We cannot sit here and say we could prevent the outcome, but it wouldn’t have been so long. That was painful.”

Her brother Orlando Green, who is a police officer in New Jersey, said he feels that for years Little Rock police did little to nothing to find his sister or the person who killed her.

He wants the only living suspect in the case held accountable.

“Does this state have the death penalty?” he asked pointedly.

Larry Cooney, whom police identified as a suspect in the case along with his now-dead uncle Kenneth Cooney, through his brother declined to comment about the case.

Hastings rejected criticism that police may have investigated Carmeletta’s case more thoroughly if she had been a white girl from another part of town.

“That’s not true at all,” said Hastings, who joined the department in 1976 and was a patrol officer when Carmeletta disappeared. “We take every case seriously. Race was not a factor. Our homicide detectives are out to get the bad guy.”

Hastings said the primary reason the case fell off the radar was that it wasn’t classified as a missing-child or suspected-homicide case.

“That hampered the investigation for a time,” he said.

In the end, Jackie Brown said, the answers police and others are providing about the way her daughter’s case was handled won’t change anything.

“They can’t fix it.” Information for this article was contributed by Amy Upshaw of the Arkansas Democrat-Gazette.

Print Headline: Girl’s remains identified, but questions go back to 1982