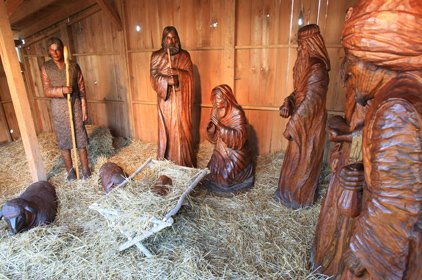 A nativity scene sits on the lawn south of the state Capitol Monday afternoon. A judge ruled Monday that the secretary of state’s office must let a group that includes atheists put a winter solstice display on the Capitol grounds. The Arkansas Society of Freethinkers had sought to put its display up alongside the Christmas display, but had its request denied.

LITTLE ROCK — An atheist group’s display marking the winter solstice will join the traditional Nativity scene on the state Capitol grounds as a result of a ruling by a federal judge Monday.

U.S. District Judge Susan Webber Wright granted a preliminary injunction in favor of the Arkansas Society of Freethinkers, who sued Secretary of State Charlie Daniels after he refused to grant permission for the group to put up its display, dubbed the Box of Knowledge.

“We liked the outcome,” said Mark Love, an electrical engineer who is the registrar for the society. “We wanted to be included and to be able to express our message. It looks like it’s going to happen.”

Daniels said his office staff will work quickly with the society to place the display.

“The judge has ruled,” Daniels told reporters after the three-hour hearing. “We’re certainly going to comply immediately with her ruling.”

Tod Billings, president of the society, said the group planned to put up the display on Wednesday. The winter solstice, which marks the shortest day of the year, is Dec. 21.

Though the state will comply with the preliminary injunction allowing the display, Daniels said he wanted more time to wait for a written ruling before deciding whether to pursue the case further. “’I’ll just have to wait and see how we proceed from here,” he said.

Daniels reiterated outside the courtroom what he said inside: That he generally didn’t want any more displays on the state Capitol grounds, that he made an allowance for the Nativity because it was on the grounds long before he took office in 2003 and that he didn’t think the appearance of the society’s display fit with the holiday theme even if it complied with the written policy developed by his predecessor, Sharon Priest, in 1993.

The Freethinkers’ wooden display, which is eight feet tall and four feet wide, has four sides covered in vinyl. One side depicts the history of winter solstice celebrations, a second side provides background about the society and its ideals, the third side is filled with covers of books about atheism and science, and the final side covers some facts about the universe and the scientific method.

“I didn’t think this one was suitable for the Capitol grounds, appearance-wise,” Daniels said. “It didn’t seem to be in the holiday theme that we had.”

“Even with garlands and lights on it?” a reporter asked.

Wright disagreed. Once Daniels agreed to allow a private group to put up a display celebrating “the birth of Christ,” he opened up the state Capitol grounds for “freedom of expression,” the judge said. Even if the “designated public forum” was for a limited purpose, as attorneys for the state argued, she said the society display’s celebration of the winter solstice, which occurs at this time of year, fit within that limited purpose.

“This is not something that was made yesterday,” Wright. The society “is a group, an organized group, and it has freespeech rights, and it did follow policy.”

The judge also disagreed with Daniels on the aesthetics. She pointed out that the state Capitol is adorned inside with festive, nonsecular displays and lighting. The Nativity, by contrast, is a simple barn-like structure, in keeping with Christian tradition on the humble birth of Jesus. It also is on the south side of the state Capitol, by itself.

As a result, “aesthetically, there’s no problem,” with the society’s display, Wright said.

This year was the second time the society, which was backed in its lawsuit by the American Civil Liberties Union of Arkansas, had applied to have a display at the Capitol. Its 2008 application also was denied. This year, the group submitted its formal request Oct. 16. The secretary of state’s office denied the request in a Nov. 4 letter, citing a state law allowing Capitol police to maintain “proper order and decorum.”

The proposal sought to make the display available for viewing for 41 days - from Nov. 25 through Jan. 4 - which is the time of year when days are shortest in the Northern Hemisphere.

The 1993 policy requires sponsors of proposed displays to submit written requests detailing the desired location and length of time for displays, and to acknowledge their responsibilities for maintaining the display and ensuring it doesn’t interfere with foot or vehicle traffic, among other things.

The society contended that its written request, which included photographs of theproposed display, complied with the policy but was still rejected.

In court, an assistant attorney general, Mark Ohrenberger, argued that it was quite clear from the testimony of Daniels and one of his deputies, Cathy Bradshaw, that they took great care in the appearance of the state Capitol and its surrounding grounds.

Daniels “disapproved of the Freethinkers’ display based on its appearance, not its content,” Ohrenberger said.

But one of the society’s ACLU attorneys, John Burnett, scoffed that the secretary of state’s office policy was anything but content-neutral and, instead, constituted a “massive violation” of the U.S. Constitution’s free speech protections.

“The First Amendment is not a joking matter, and the secretary of state has virtually turned this whole thing into a joke,” Burnett told Wright.

The Arkansas Society of Freethinkers was incorporated in 1996 and claims a membership of about 100 people who are “atheists, agnostics, deists and rationalists,” according to Love. Membership is open to anyone who is “atheist friendly” and won’t proselytize, he said.

“Our gatherings are a great place to exchange information, ideas and life experiences,” according to the society’s Web site. “We know being an Freethinker in the Bible Belt is a lonely life and we’d liketo make life a little less lonely for all of us. We are a peaceful group of freethinking individuals that enjoy getting together for a god-free, good time! Most of our members are recovering Christians.”

Jerry Cox, director of the Family Council, a conservative education and research organization based in Little Rock, criticized the judge’s ruling.

“Have we come to the point where federal judges are going to have to approve Christmas decorations?” Cox said in a statement in response to Wright’s decision.

Cox, who attended the hearing Monday, also criticized the lawsuit, which he called the latest attempt by the ACLU and “so-called freethinkers” to “attack the celebration of Christmas as a Christian holiday.”

Rita Sklar, executive director of the ACLU of Arkansas, said the ruling would apply to temporary displays at any timeof year, not just holidays.

“Basically, if it’s opened up - I think the judge alluded to that - there could be no end,” he said. “I mean there’s hundreds of winter solstice celebrations. My main thing has been to keep it like it has been.”