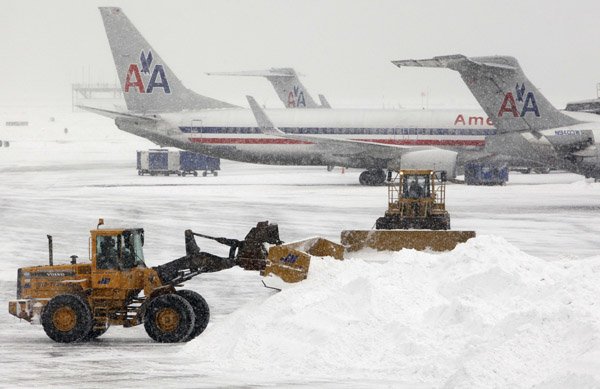 Crews work to clear snow from the tarmac at Logan International Airport in Boston.

Airport delays eased and travelers stranded by canceled flights were finally getting off the ground, but there were worries that weekend problems could cause ripples that would be felt during the Christmas rush.

The storm crept up the coast on Saturday and Sunday, walloping states from the mid-Atlantic to New England, causing widespread power outages and treacherous driving conditions. The weather was blamed for at least seven deaths, including a snowmobile driver who crashed head-on into a horse-drawn buggy in Pennsylvania’s Amish country.

Airports in the East that were jammed up this weekend were working their way back to normal. On Monday, the Federal Aviation Administration was reporting that nearly all major airports on the East Coast had average flight delays of less than 15 minutes.