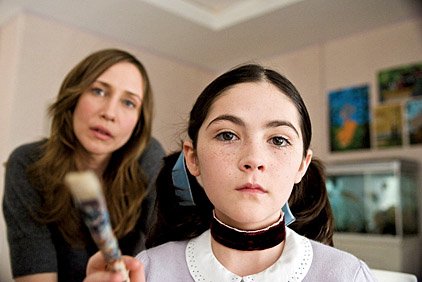 Kate (Vera Farmiga) is the adoptive mother of problem child Ester (Isabelle Fuhrman) in Orphan, a horror film that has upset some adoption and foster care groups.

LITTLE ROCK — Often divided over policy and practice, America's adoption community has unified in dismay over Orphan, a horror movie opening today that its critics say will fuel negative attitudes toward real-life orphans.

Some adoption advocates are urging a boycott of the movie. A coalition of prominent national adoption and foster-care groups, while not joining the boycott call, has asked for a meeting with Warner Bros. Chief Executive Officer Barry Meyer to discuss their concerns.

"We are concerned that in addition to its intended entertainment value, this film will have the unintended effect of skewing public opinion against children awaiting families both in the United States and abroad," said a letter to Meyer from the Congressional Coalition on Adoption Institute.

Warner Bros. said it has taken the concerns seriously. Spokesman Scott Rowe says the company may add a pro-adoption message at the end of the film when it comes out in DVD form.

Trailers for the film, shown nationwide for two months, make the basic plot clear without revealing the twist at the end. A couple mourning the loss of an unborn baby decide to adopt a girl from a local orphanage - and their hopes for happiness give way to unease and fear as the new family member turns out to be far different from what they expected.

The trailer prompted outrage from many adoption advocates and adoptive families, and Warner Bros. responded by removing a much-criticized line from it in which the orphan, Esther, says, "It must be hard to love an adopted child as much as your own."

Rowe, while noting that virtually every film Warner Bros. makes offends someone, has stressed that Orphan is a make believe story.

"It is not a depiction of any real-life events or situations and has never been portrayed as anything but an entirely fictional story," he said. "We apologize if we appeared insensitive with the initial trailer, as it's never our intent to offend anyone with our products."

Rowe said he'd not yet seen the letter from the adoption coalition requesting to meet with Meyer.

The letter, co-signed by leaders of 11 adoption and child welfare groups, noted that an estimated 129,000 children are in the U.S. foster-care system waiting to be adopted, and that millions of children abroad also need adoptive families.

The letter said the film "may impede recruitment efforts by feeding into the unconscious fears of potential foster and adoptive families that orphaned children are psychotic and unable to heal from the wounds of abuse, neglect and abandonment."

Among those signing the letter were leaders of the Dave Thomas Foundation for Adoption, the National Council for Adoption, and the American Academy of Adoption Attorneys.

Another signatory was Jedd Medefind of the Christian Alliance for Orphans. His group has a Web site - Orphans DeserveBetter.org - featuring a petition urging Warner Bros. to add a pro-adoption message at the end of the film and to donate a portion of box-office receipts to aid orphans.

The Web site also asks individuals and families to share real-life stories, pictures and videos about their experiences with adoption.

The film "seems to suggest that orphans are damaged goods, and that adoption could destroy a life," Medefind said. "We need truer stories."

The film has attracted attention in Congress. U.S. Sen. Mary Landrieu, D-La., and five colleagues from the Senate and House co-signed their own letter to Meyer, urging his company to help convey "the positive and more accurate messages about U.S. foster children."

Adam Pertman, executive director of the Evan B. Donaldson Adoption Institute, suggested that Warner Bros. could improve matters by helping produce educational materials about the value of adoption.

"It has been a long time since a movie caused this much angst and worry in the adoption, foster-care and orphan care communities, even before its release," Pertman said.

Not every adoption-related group shared the angst.

"The moral panic Orphan has induced is more entertaining than the film itself, which will pass into oblivion and DVD a month after release," wrote Marley Greiner, a leader of the adoptees-rights group B****** Nation, in her blog.

"The 'outrage' is an opportunistic moment for drum banging and fundraising," Greiner wrote. "What better way is there to make publicity and $$$$$ for yourself than to create a victim where none exists?"