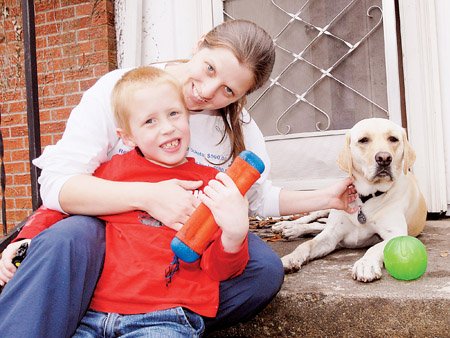 Christy Etters, her 6-year-old son, Jackson, and his dog, Chester, take a break on the steps of their home in Conway. The autism service dog, which cost $13,500, was purchased in Oregon. A Conway man whose son also is autistic helped lead fundraising efforts.

RIVER VALLEY and OZARK AREA — Many children would be excited to get a dog, but this one could save 6-year-old Jackson Etters’ life.

Jackson, a son of Christy and Jeremy Etters of Conway, is autistic, and Chester is his new guide dog.

“He calls him Chester the super hero dog,” Christy Etters said with a laugh.

A fundraising effort started a few months ago to get the $13,500 guide dog for Jackson was successful beyond Christy’s wildest dreams.

She started researching guide dogs after a car almost hit Jackson when he ran into traffic after preschool.

Jackson developed normally until he was about 2, Christy said.

“He just kind of stopped saying stuff, and he stopped paying attention to us,” she recalled.

He hadn’t even said Momma.

Christy’s sister thought he was going deaf, butChristy said Jackson would come running from the back of the house when he heard Christy turn on the movie Toy Story.

A test at Arkansas Children’s Hospital showedJackson’s hearing was fine, but concerns arose about his lack of speech.

He took speech therapy at Conway Therapy Services, and a speech therapist there suggested that Christy look into autism. It was the first time anyone had suggested it.

“The only thing I’d ever heard about autism was Rain Man,” she said, and Jackson didn’t act like the character in the movie.

He has tantrums and sometimes flaps his arms when he gets in a crowded room.

Jackson was diagnosed with autism when he was 3.

“It changed all of our lives,” she said. “We always thought it was just the terrible 2s and he was being defiant.”

The low point in their journey with the disorder was when Christy and her daughter Alex, now 2, went to pick up Jackson from Faulkner County Day School, which is across the street from Sallie Cone Elementary School in Conway.

Jackson let go of Christy’s hand and took off into traffic. She parked Alex, who was in a stroller, by the car and ran after him.

“I’m running across the parking lot, screaming his name for him to stop,” she said. “I was terrified.”

She caught him by the shirt in the middle of the street, just as a car was coming toward him.

After she got him and his sister safely in the car, Christy said she sat and cried for 20 minutes before she could drive away.

“I went to the house and just held on to both of my babies for a really long time. I said, ‘OK, what do we do ?’

“From that moment on, he didn’t stop running,” she said.

Teachers and therapists had to hold him tightly to keep him from running any time he was going outdoors.

Christy couldn’t take him to the grocery store or a park.

Christy said she and her husband saw a television news story about guide dogs helping with communication and safety for autistic children.

After a car almost hit Jackson, Christy said she started researching the dogs.

She found Autism Service Dogs of America, based in Oregon, and decided having a guide dog would be the answer. The problem was, it cost $13,500 and wasn’t covered by insurance.

Christy and her family started having fundraisers, chili-dog suppers, and her uncle organized a golf tournament. Her church, The Highlands Church in Little Rock, raised money for travel.

They conducted one fundraiser outside Walmart, asking people to donate online at firstgiving.

com/jacksonetters or just to pray for them to get the money.

A Walmart employee’s husband, Tony Stanley, decided hewanted to help. They have an autistic son, Donovan.

Stanley said his wife brought a flier about Jackson home with her.

“We remembered Jackson from the (Faulkner County) Day School because my son went there, too. We just remembered how cute he was,” Stanley said.

Unbeknownst to Christy, Stanley got on a sports Web site where people discuss their favorite teams and issued a challenge to raise $2,000 for the Etters family through firstgiving.com.

“I’ve talked about my son on there (the Web site) before ... and a lot of people on there didn’t know a lot about autism, and they were really interested.

It became almost like a competition. They wanted to raise this money really bad,” Stanley said.

The dozens of e-mails alerting them that people had donated money on Jackson’s behalf bewildered Christy and her husband.

They were just people withbig hearts.

“Within 36 hours, we had all the money we needed,” she said.

Christy and her mother went to Oregon to get Chester, a yellow Labrador, and they stayed a week so Christy could do training, learn commands and get comfortable taking the dog in public.

The trainer, Kati, will come to Conway this month and spend a week watching the dog with Jackson and do more training.

The dog has a little vest with ahandle, and Jackson will have a leash attached from him to the dog.

When she first saw Chester, “I bawled like a baby,” she said.

When Jackson saw Christy and the dog at the airport, he said, “’That’s Chester, the super hero dog,’ and I said, ‘That’s right.’” Jackson lay on top of Chester and started hugging him, she said.

When they left the airport and walked outside, Jackson didn’t run - he held on to Chester’s vest.

“Nobody told him to hold it, but he never let go,” she said.

Chester had only been home a few days, but Christy said the dog already seems to sense what Jackson needs.

“I can watch Chester now when Jackson is about to have a fit, because I know the signals of Chester getting stressed ... and I can stop it before it happens,” Christy said.

The dog will go everywhere with Jackson - even school.

Chester has given Christy a new positive outlook on Jackson’s future.

“Children with autism have no sense of boundaries - they just don’t know where they are in space. A lot of times you’ll see autistic kids hit themselves, and it’s like, ‘OK, that’s where my head is, that’s where my arm is.’ So, with him being tethered to Chester, Jackson will always have that sense of ‘I know where I am.’ It will help him concentrate; it will help him grow in so many ways,” she said.

And yes, she said, Chester could even save his life.