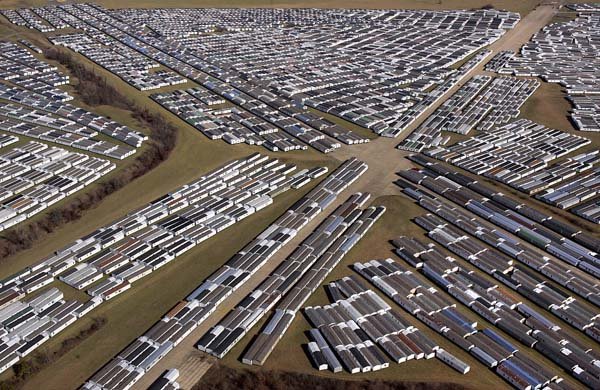 An aerial photo of the Hope airport taken in February 2006 shows some of the fleet of trailers that once numbered 19,000.

The auctions of 1,047 units raised $7.2 million, but also have provoked more concern about the units, which have been no stranger to controversy since they were constructed in 2005 and largely went unused after Hurricane Katrina and Hurricane Rita struck the Gulf Coast.

People within the industry expressed worry the auctions of the three lots will flood the market with mobile homes, undercutting private dealers. And state regulators wonder whether the units will fall under their authority.

The auctions by the U.S. General Services Administration are part of an effort to cull manufactured homes and travel trailers stored on the property of the Hope Municipal Airport in Hempstead County.

Other homes and trailers in the fleet that once numbered 19,000 have been donated to American Indian tribes or been labeled surplus property and given to state or local governments for their use. Others have been sold in smaller lots of as little as 30, 35 and 50 units.

But General Services Administration officials say that FEMA wanted to pare down the number they were storing more quickly, hence the bigger lots seen in last month’s auctions.

“It would just compete with our product,” said Ray McKay, general manager for Legacy Housing. “We will sell them to dealerships across the country as used houses.”

Legacy officials inspected the mobile homes before they submitted their bid, he said.

“We heard horror stories about their condition, but they were in pretty good shape,” McKay said.

FEMA spent some $2.7 billion for roughly 145,000 units after the storms, then had trouble finding suitable sites because under federal law the units may not be set up in flood plains. Then concerns over formaldehyde levels surfaced, which further limited the trailers’ distribution. Trailers eventually were sent to southeast Texas for victims of Hurricane Ike last year, and to tornado victims in Arkansas and Tennessee.

Another 400 manufactured homes were sold at an auction that closed Oct. 31, for $2.9 million. A person associated with Legacy Housing’s previous bid was awarded the lot, according to the General Services Administration, but agency records indicated he represented a different company.

Auctions of the mobile homes and trailers are taking place in other states where they have been stored, a practice FEMA no longer deems valid. The agency arranged through the General Services Administration to sell some of the units for scrap earlier in the year.

Some within the industry express concern that the auctions, should they continue, could upset a fragile market for new mobile homes.

“It’s going to affect our market, especially in lots of that size,” said J.D. Harper, executive director of the Arkansas Manufactured Housing Association. The large sale of the units for “pennies on the dollar” could “cripple” the industry.

None of the mobile homes sold in the large lots at auction have made their way onto dealer lots yet, according to Harper and others in the industry.

Witt Waller, executive director of the Arkansas Manufactured Housing Commission, said any manufactured home for retail sale in Arkansas typically comes under the regulation of the commission by an arrangement with the U.S. Department of Housing and Urban Development.

The commission helps buyers who have complaints about their manufactured homes, especially regarding warranties. The commission has no jurisdiction over homes that are used as rentals, such as in a mobile home park.

So far the commission cannot say what will happen if the FEMA homes are sold in Arkansas, Waller said. The auctions prompt questions Waller hasn’t been able to obtain answers for: Because the homes were never used, will they be considered new and under warranty?

“What responsibility does our agency have?” Waller asked.

For their part, FEMA officials said the sales reflect prudence on the part of the agency, which already has paid more than $1 million to lease the land at the Hope airport on which the mobile homes and trailers are stored.

“The GSA-managed auctions are part of a fiscally responsible inventory-reduction plan to dispose of excess temporary housing units,” said Clark Stevens, a FEMA spokesman. “Many of the units will have limited uses, such as storage or use at work sites.”

The agency is taking measures to prevent the travel trailers from being used as housing.

“As with all earlier sales, purchasers will be required to sign a buyer’s certificate acknowledging that a purchased travel trailer is not to be used as housing and will not be resold as housing,” Stevens said.

“In addition, prior to sale, FEMA will place a clearly visible decal “Not to be used for housing” on the window nearest the door of each travel trailer.”