Samuel Conway (from left), Marvin Stringer and Jeremy Pickney were identified by Garland County authorities as the suspects in the deaths of five people in Pearcy. Stringer was killed in a shootout with officers at a Hot Springs hotel.

Sheriff’s Lt. James Martin identified the other two suspects as Samuel Conway and Jeremy Pickney, both 23 and of Hot Springs.

Both Conway and Pickney pleaded not guilty to the charges during a brief court appearance Friday.

Martin declined to answer questions from reporters about the case, citing a gag order. “We are still investigating it,” the lieutenant said. “It’s not over yet.”

Two sheriff’s deputies were injured in the raid that left Stringer dead at the motel. Martin said Deputy Jason Lawrence was shot and was in serious but stable condition at a hospital. Deputy Felix Hunter suffered a “medical issue” at the motel, but was resting comfortably at home Friday, Martin said.

Court documents outline a case of robbery gone horribly wrong. One court filing by police shows a confidential informant told investigators that Pickney offered the rims and televisions the day after the killings, saying they came from a “lick” or robbery they took part in. 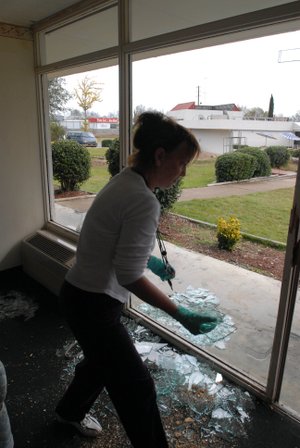 Photo by Karen E. Segrave
Twyla Davis, a housekeeper at the National Park Inn in Hot Springs, works to clean up broken glass from room 139, where the man suspected of killing five Pearcy residents last week was shot and killed by police on Thursday evening.

The informant also said Conway pulled out a .22- or .25-caliber handgun. The court filing by police shows that the state Crime Laboratory believes bullets of both of those calibers were found in the victims. The filings also claim Stringer sold an informant a 9 mm pistol and a .40-caliber pistol. The .40-caliber pistol had a serial number that matched one stolen owned from the elder Edward Gentry, according to court documents.

Firefighters discovered four bodies early Nov. 12 in the rubble of a burned mobile home at Pearcy. Police found the body of the elder Gentry in a home next door. Officials found the truck of one of the victims on fire in Hot Springs, about 13 miles away.

FBI agents eventually joined the investigation, which local police said had reached a series of dead ends until a judge signed a series of warrants Thursday night allowing officers to search the men’s homes.

Documents filed in Garland County Circuit Court show officers took nothing from Conway and Pickney’s homes. Warrant information from the motel had not been filed late Friday afternoon.

At the National Park Inn motel, a maid wearing latex gloves vacuumed away debris from the room Stringer stayed in. The door and front window pane were gone, with chunks of glass sitting upright in a trash can. Blood stained the dark-colored carpet.

Motel guest Lisa Mohl, 40, said she left her room after her husband Greg failed to come back from getting ice. As she walked outside, she said she saw Stringer, who motioned toward her and asked her to walk over to his room.

She instead turned and walked toward the ice machine, finding heavily armed police officers waiting there.

“That’s when the guns and the police scared me to death,” Mohl said.

Mohl said she and her husband later gathered in the motel’s office and felt the room shake and lights flash as police raided Stringer’s room. She heard several gunshots and later watched as officers pulled Stringer’s lifeless body away.

“I could tell that he knew he was being watched,” Mohl said. “I feel he wanted me over there for a reason. I’m just glad I didn’t go over there.”