STONE COUNTY A forgotten past 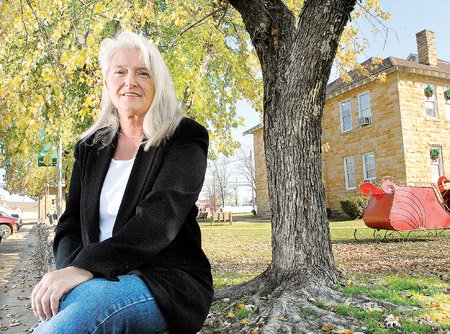 Freda Cruse Phillips of Mountain View is an author, photographer and sociologist who is interested in preserving the history of Stone County. She has created a Web site, vanishingozarks.com, where people can share history, crafts and music of the Ozarks. ( Greg Benenati)

THREE RIVERS AREA — Standing on a hilltop overlooking Mountain View, Freda Cruse Phillips looked down the old road to Riggsville. Fallen trees and broken branches, some from the 2008 tornado, the rest from the 2009 ice storm, completely blocked the grass-filled roadbed.

The landowner, Denny Stewart, said, “I’m sorry. I thought we could get through this way.”

“We’ll just have to get there another way,” she said.

Phillips, a writer, photographer and sociologist, is researching the “real history” of Stone County. One of the oldest towns in Arkansas, Riggsville was founded in 1819. In the 1880s the town literally picked up and moved - houses, stores and all - to what became Mountain View. At the original site, a few structures still stand. Other foundations and a dam remain.

“We have so much history in the Ozarks,” Phillips said. “The natural beauty of the water and trees, the old buildings. We need to save all this.”

She is creating a Web site, vanishingozarks.com, where people can share Ozarks history, crafts and music. She wants to set up driving and walking tours and hopes to make Riggsville a county or state park.

“Since I was a child I wanted to know more about what wasn’t in the history books,” she said.

She is writing a series of books called The Vanishing Ozarks. The first, Voices Of Our People, was published last month. Her next book will be Places Of Our People and will be about Riggsville. She also works with the Nikki Lee Atwell Foundation, set up in memory of her daughter who died in a car crash in 2002.

Born in 1957, Phillips was raised on a cattle ranch in Stone County. Her father also bootlegged alcohol into the dry county. She knew all his customers.

“Some of them were the most important and ‘respectable’ men in the county,” she said. “I grew up knowing how to read between the lines.”

She became fascinated by social dynamics.

“I learned that it was what you knew on people that got things done,” she said.

And her father got things done.

“He didn’t tell people’s secrets, but knowing them gave him power,” she said.

Phillips graduated from the University of California, San Diego, with a triple major in English, American literature and sociology. While a student there, she worked as a lifeguard and as a model. She had become interested in photography one summer working in Arizona. On a fashion shoot in 1975, she met famed photographer Richard Avedon.

“He couldn’t talk to people,” Phillips said. “I’ve always been able to talk to anyone.”

He asked her to help with his 10-year project In the American West.

“He would have me meet him places to set up photo shoots,” Phillips said.

“We learned from each other,” she said. “You can talk to people and see into their souls.”

She would get people to talk and reveal themselves, and then Avedon would take the photos.

“We want to raise awareness of our history through music,” she said.

Her Mountain Music Project, which opened Oct. 21 at Mountain View’s Country Time Restaurant, will be on permanent display. When the project is finished, it will include a History Wall and a Young Musicians Wall.

“In my photos, people don’t look at the camera,” Phillips said. “I try to get my subject to forget I’m there. I wait until their faces show they are completely lost in the music. When you look at my work, you believe if you pick up a guitar you will feel like the person in the photo feels.”

Her photos, including many of political leaders, has appeared in national magazines. She still sometimes accepts national assignments.

From 1978 to 1988 Phillips was research assistant for Jack D. Douglas, a UCSD sociology professor. She worked as a researcher and co-authored several of his books, including Creative Interviewing.

“When you do an interview, you try to get a comfort zone with the person,” she said. “Share a little bit of yourself, showing them you’re not judgmental, that you’re really interested in what they know.”

She interviewed 52 local people for Voices Of Our People. When she interviewed Chester Pastmore at his kitchen table, his wife said, “You shouldn’t be telling those stories.” He said, “Georgia, don’t you think it’s time I told someone the truth?”

Phillips said, “People tell me their stories and their secrets. I don’t tell anything they don’t want me to. They tell me because I grew up here, and they trust me not to do them any harm.”

Returning to Arkansas in 1988 to work on then-Gov. Bill Clinton’s presidential campaign, she decided to stay. For the next 17 years, Phillips worked for the Arkansas Department of Human Services in Child Protective Services. She became an expert on laws and procedures, writing many policies and procedures the state still uses.

DHS fired her in 2005 over a controversy concerning a local high school. Phillips’ mother had just died, and then Phillips’ house burned. She decided not to fight to get her job back.

“Years ago, I quit being a lifeguard in San Diego when a child drowned,” she said. “Another lifeguard wasn’t paying attention. I said I would never be in a position again where what I did or didn’t do could endanger a child. Until I left DHS, I didn’t realize I had put myself in that same position. The job was a terrible emotional strain.”

On Oct. 8, 2002, Phillips’ 19-year-old daughter, Nikki Lee Atwell, fell asleep at the wheel driving to Texas and was killed in an accident.

To honor her child’s life, Phillips and her family set up the Nikki Lee Atwell Foundation.The foundation makes grants in art, music and the humanities to people and organizations in Stone, Independence and Izard counties. The foundation’s board has awarded grants for college, art classes, band camp, ballet and to purchase instruments. They rely on donations.

Phillips wants the foundation to become a conduit for donations to purchase and protect historic sites and cemeteries in Stone County. All proceeds from her book sales support the Nikki Atwell Foundation. For more information about the foundation, write to P.O. Box 2133, Mountain View, AR 72560, or visit the Web site www.nlafoundation.org/index. html.