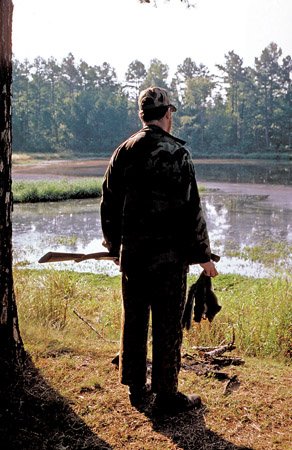 TRI-LAKES AREA — Waking up with the woods on an early morning squirrel hunt is exhilarating any place and time. For many Arkansas bushytail fans, though, nothing quite measures up to a hunt in the mountains. Days dawn crisp and fresh, and a morning foray in the highland woods is invigorating. Hunting squirrels is seldom easy, especially in steep mountain terrain, but this challenging sport is a sure-fire way to kick off the hunting season.

The Ozark Mountains in northern Arkansas form one of the most picturesque squirrel hunting areas in the southern United States. The Ozarks are predominantly characterized by oak and hickory forests, and fox and gray squirrels are both common.

Those who prefer a more primitive, back country hunting experience may wish to look for squirrels in the national forest's almost 50,000 acres of designated wilderness where no vehicles are allowed. The acreage is divided among five National Wilderness Preservation areas: Black Fork Mountain, Caney Creek, Dry Creek, Flatside and Poteau Mountain. Squirrel hunting is available throughout most of the remaining Ouachita National Forest lands as well.

Fox and gray squirrels are both common in Arkansas's mountain woodlands. They often occupy the same areas, but fox squirrels are typically found in more open woods, usually near the forest edge. Gray squirrels, on the other hand, prefer dense stands of trees in deeper woods.

The two species also have differing activity periods. Hunters should be in gray squirrel woods at first light and hunt the first two hours of daylight for best results.The third hour is somewhat productive, but hunting activity tapers off since few squirrels venture out at midday. A small amount of activity can be expected throughout most of the afternoon, but there's no worthwhile peak.

Squirrel hunters should do some prehunt homework to determine which large-scale areas in a particular section of mountains are most likely to harbor good squirrel populations. Some areas will have excellent squirrel habitat, while others may be almost entirely devoid of squirrel-attracting character.

Hunting hardwoodshrouded stream drainages is one of the most consistently productive tactics for pinpointing bushytail concentrations. In the oaks, hickories and other hardwoods found along rivers and creeks, you usually see a better quality of mast production. And because these areas produce more mast, they tend to hold larger concentrations of squirrels.

Another good tactic is to look for sizable plots of woodland covered by a single type of oak tree. Anywhere you find fairly consistent oak types, like a patch of white oaks on the side of a large hill, you can usually find squirrels.

Jim Spencer, a longtime avid squirrel hunter who lives in Calico Rock, offers some additional suggestions for mountain squirrel hunters. Spencer has spent hundreds of hours hunting in the Ozark and Ouachita mountains and has developed several strategies that can work for any squirrel hunter.

"When nuts are available," Spencer said, "I scout for nut cuttings that indicate squirrels are in an area. I usually start at the top or bottom of a slope and work my way up or down the hill until I find a level where the trees are producing mast. Then I stick with that level when hunting. Some years, only the black oaks on the tops of the hills are producing nuts, and that's where I'll find squirrels. Other years, white oaks along the lower slopes are more productive, so I'll concentrate my hunting efforts in lower elevations."

As a general rule, Spencer usually works the north slopes first when hunting the mountains, especially in the Ouachitas, one of the most arid mountain regions in the southern United States.

Selecting a proper firearm also is a concern for mountain squirrel hunters, and the debate over whether to usea shotgun or rif le has raged on for years. The best advice I can offer is to use the firearm you're most comfortable shooting.

A .22 rimfire paired with a good variable-powered scope (2x-7x is ideal) is the choice of most rifle hunters. Short, long, or long-rifle ammunition are all sufficient for making quick kills in the hands of competent marksmen. Hollow-points are preferred by some, but they often cause excessive damage to the meat and are unnecessary for hunters who take care to properly place shots in the head or heart region.

Shotgun choices var y considerably from hunter to hunter, and anything from a .410 to 12-gauge in size is reasonable. Most hunters opt for a 20-gauge or 12-gauge and light-load No. 6 or 7-1/2 shotshells. In mountains, however, where squirrels are often high in hillside treetops, magnumload shotshells are not inappropriate.

Hunting mountain squirrels isn't for everyone. It's a demanding sport that sometimes requires long hours of scouting in rugged terrain. If you're a squirrel hunting junkie like me, though, this doesn't matter. The allure of this captivating sport will draw you to the woods anyway, so why not head for the mountains where days dawn crisp and cool and the squirrels arethick as August blackberries? Hunting mountain squirrels, Arkansas style, is one of the best ways of all to kick off the hunting season. Give it a try. There's no better tonic for the outdoor itch.

The 2009-2010 squirrel-hunting season in Arkansas started Sept. 5 and runs through Monday, Feb. 15. The daily limit is eight squirrels per hunter, with a possession limit of 32.