Shock moving to Tulsa, with Richardson at the helm 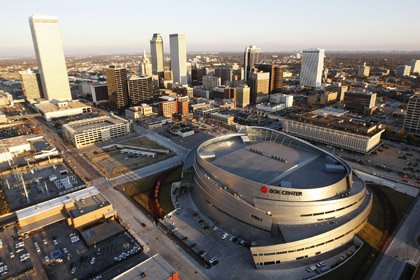 The BOK Center is seen in the foreground in this photo of downtown Tulsa.

League president Donna Orender and other officials made the announcement Tuesday that the Shock was being sold and relocated to Tulsa, a day after The Associated Press reported the move.

The announcement came five days after a Tulsa ownership group said it would formally apply to the WNBA to purchase a franchise, although it wasn’t known at the time if it would be an expansion club or a relocated team.

The sale and move need WNBA Board of Governors approval.

Former Tulsa and Arkansas coach Nolan Richardson already has been selected as the Tulsa team’s coach and general manager. The team will play at the downtown BOK Center, which holds about 18,000 and opened last year.

Oklahoma City businessmen Bill Cameron and David Box lead the Tulsa WNBA ownership group, formally known as Tulsa Pro Hoops LLC. Cameron also is a part of the ownership group of the NBA’s Oklahoma City Thunder, but there will be no connection between the Thunder and the WNBA franchise.

Cameron is the CEO and chairman of the board of American Fidelity Assurance Co., a private, family-owned life and health insurance company. Box is founder of The Box Talent Agency, the largest talent agency in Oklahoma.

Orender praised Cameron and Box and said “we are confident that with their business acumen, passion for the game and commitment to the community, the team will achieve great things in Tulsa.”

She also praised the Davidson family, the Detroit Pistons organization and Shock fans in Detroit for “helping us grow the game of women’s basketball.”

Bill Davidson, who owned the NBA’s Pistons and the Shock, died in March.

Detroit made its WNBA debut in 1998 and won titles in 2003, 2006 and 2008. The Shock lost last month to the Indiana Fever in the Eastern Conference finals after rallying to earn a playoff spot.

The Shock had much success on the court, but not in the stands in a state with four major professional teams along with Michigan and Michigan State athletics.

In the 2003 WNBA finals, Detroit drew 22,076 fans — setting a record for the largest crowd to watch a women’s professional basketball game — but most games were poorly attended with a curtain covering up the upper level of The Palace of Auburn Hills.

Tom Wilson, the president of Palace Sports and Entertainment, the Pistons and the Shock, called the decision to part with the franchise “one of the toughest we have ever made.”

“The Shock has been a true force in the WNBA, but the fact of the matter is that the economic realities have caused us to make this decision,” Wilson said in a statement.