Clinton up close in book 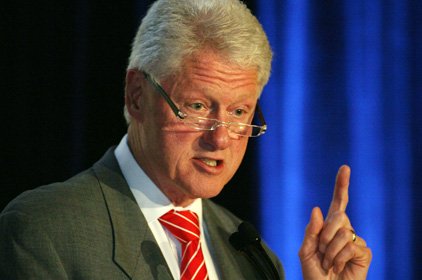 LITTLE ROCK — While Bill Clinton was the leader of the free world, a new book details how his mind often wandered back home to Arkansas as he ruminated on everything from Hot Springs to Razorback basketball to Whitewater, along with the major issues facing the country.

The Clinton Tapes: Wrestling History with the President, by Pulitzer Prize winning historian Taylor Branch, released Tuesday, offers a fresh glimpse into Clinton's reflections on events that unfolded throughout his presidency, as well as the personalities surrounding him.

Many of those are Arkansans, some with highprofile jobs and others with lesser-known insider roles.

There's Rodney Slater, the transportation secretary from Marianna who is now a Washington lawyer, reminiscing about the all-night rehearsals for Clinton's first inaugural address.

And there are Hillary Clinton, wearing her robe at bedtime, and Chelsea Clinton, singing a medley of show tunes, popping into the meetings that were held in the private White House family quarters.

But mostly there's Bill Clinton, holding forth in what could be called bull sessions with Branch, a long-ago friend who worked with the future first couple when all three were aides for George McGovern's 1972 presidential campaign in Texas.

Although their friendship had lapsed, Clinton sought Branch after his election to work with him on an oral history project. Beginning before Clinton took office, the pair recorded 79 previouslyundisclosed sessions on cassette tapes that the president stored in his sock drawer.

While Branch did not have access to the actual tapes, which are now stored at the Clintons' home in Chappaqua,N.Y., he recorded his own reflections on each conversation during his hour-long drives from the White House to his home in Baltimore, which resulted in his 707-page book.

The sessions touched on everything from policy issues of the day to personal reflections. No topic was too big or too small for discussion.

Whitewater first came up on Nov. 22, 1993, when "Clinton shrugged off newspaper stories recurring lately about a 1978 land deal in Arkansas," Branch wrote.

"He waved off Whitewater as a trifling nuisance," Branch continued. "My notes say, 'He didn't seem particularly upset or irritated.' Nor was I.Neither of us had a clue that Whitewater soon would become the linchpin for investigations to mark and convulse his presidency."

And there was more: "In a further irony, talk of Arkansas did prompt a clairvoyant digression into more personal attacks."

Clinton then went on to discuss, according to the book, how the "agitation over Whitewater" was being fostered by the same two "dedicated enemies" he blamed for stories linking him romantically to Gennifer Flowers - his former Oxford classmate Cliff Jackson and his former Republican gubernatorial rival Sheffield Nelson.

The themes of Whitewater - and all the controversies that plagued the Clinton White House, from the travel office firings to the Paula Jones sexual-harassment lawsuit to the ultimate impeachment of thepresident - crop up repeatedly throughout the book.

Explaining his relationship with former White House intern Monica Lewinsky, Branch quoted Clinton as saying, over and over: "I think I just cracked."

The manuscript also reveals Clinton's frustration with the media and its coverage of those controversies, from CNN to The New York Times to the Washington Post.

But the president saved particular ire for the Arkansas Democrat-Gazette, calling his hometown newspaper his "chief tormentor for decades."

When Clinton was considering whether to appoint the late federal Judge Richard S. Arnold, who had previously been diagnosed with cancer, to be the first Arkansan on the U.S. Supreme Court, the Democrat-Gazette was among those that supported the idea.

"It had amused [Clinton] at first that his nemesis madecommon cause in friendly editorials on behalf of Judge Arnold," Branch wrote.

Democrat-Gazette publisher Walter Hussman, the book said, had "lobbied friends in the right-wing press," such as editors at the Wall Street Journal to support Arnold for the nation's highest court. Hussman's sister had been Arnold's first wife.

"This was all fine, said the president, but these newspeople were blindly selective about the personal consequences of their politics," Branch wrote.

Clinton had been following the Democrat-Gazette's news coverage of the Troopergate controversy from the White House, and he hadn't liked it.

"He said the Journal editors had hounded [White House deputy counsel] Vince Foster to death with malice, and this was just as bad."

Branch said White House Chief of Staff Thomas F. "Mack" McLarty, who grew up in Hope with Clinton and Foster, was "aghast" at Clinton's plan to confront Hussman.

"But the president called Hussman anyway, determined to upbraid him for entangling so many lives in Faulknerian plots," Branch wrote.

Hussman, reached late Tuesday while traveling on business, offered a different recollection of that phone call. The publisher acknowledged that he had been actively supporting Arnold as a potential Supreme Court justice and said McLarty had called to say the president wanted to talk with him about that.

It was after midnight in Little Rock - making it after 1 a.m. at the White House - when the call came, Hussman said. While Clinton acknowledged Hussman's efforts on behalf of Arnold, the president wanted to talk about something else.

"He launched into, I wouldn't call it a tirade, but he was very upset and resentful" about the allegations of sexual impropriety being made by Arkansas state troopers," Hussman said. The troopers had alleged that they had arranged sexual liaisons with women for Clinton when he was governor. Clinton then vented about the situation, he recalled, blaming it on Sheffield Nelson and the Republicans.

"When we hung up, I never got the impression he was angry at me," Hussman said. "It's true he vented his anger about the allegations being made by the troopers. But I never took that as criticism of me or our newspaper."

Hussman said he reiterated his support for Arnold, who early in his career had served as general counsel for the Hussman family's newspaper company. And he continues to "absolutely" think Clinton should have appointed Arnold to the high court.

"He would've been on the Supreme Court 10 years before he died," in 2004, Hussman said. "He would've made the people of Arkansas proud." Taylor Branch will be speaking and signing copies of The Clinton Tapes at the University of Arkansas Clinton School of Public Service's Sturgis Hall in Little Rock on Oct. 15 at 6 p.m.

Excerpts from the book

John the Doorman whisked me upstairs to the Solarium, where the Clintons were finishing a late dinner with several couples from Arkansas. Attention centered on a mild-looking gentleman of advanced years. The president said he had allowed his old campaign pilot to take control of Air Force One on the flight home today, touching off rowdy jokes from the group about brushes with death at the hands of a retiree cleared only for puddle jumpers. Apparently the man had a reputation for hijinks, such as filing fake flight plans to deceive Clinton's barnstorming rivals. The pilot smiled through the yarns about him. Clinton later told me he was a terminal cancer patient being celebrated with friends and his wife, who suffered from Lou Gehrig's disease.

Clinton shrugged off newspaper stories recurring lately about a 1978 land deal in Arkansas. He said the issue had been covered extensively during the 1992 primaries: He waved off Whitewater as a trifling nuisance. My notes say "He didn't seem particularly upset or interested." Nor was I. Neither of us had a clue that Whitewater soon would become the linchpin for investigations to mark and convulse his presidency.

For relief, skipping over two gruesome car bombs in Algeria, I asked about recent ceremonial visits from championship sports teams. The Dallas Cowboys managed not to tear up the White House. They behaved like gentlemen, he quipped, to befit the team's many Arkansas ties. An assistant coach came from Arkansas State, and head coach Barry Switzer had grown up under harsh deprivation in the last Arkansas county with an active Ku Klux Klan. Clinton said Switzer's father had been a bootlegger who ran into a tree and killed himself in a car chase leaving the home of his black mistress.

Notice of [Virginia Kelley's] death reached Clinton after midnight on January 6. He spent time at home comforting his brother, who had leaned heavily on their mother through his own severe troubles with drug use and imprisonment. "Roger hated our father a lot more than I did," said Clinton, explaining that the violent, alcoholic tantrums of the seniorClinton had fallen hard on his younger sibling. The president said he had made a strenuous plea for self-control just before the funeral. "This day is for Mother," he told Roger, "but if we argue or yell or break down, then the whole thing is going to be about us." Separately, he praised his stepfather Richard Kelley-Virginia's fourth husband-for leadership through an emotional impasse about whether her grave should lie among the Clintons in Hot Springs, or elsewhere. Kelley took Clinton aside to defer, saying she should be buried in Hope next to the president's biological father and namesake, William Jefferson Blythe, who had died in a car crash before Clinton was born. "He was the first and great love of her life," Kelley told him magnanimously. "It's proper for you to decide, and we'll worry later about where I'll be buried." That settled, the family pulled together for the funeral, and Clinton described its joyful service of tribute.