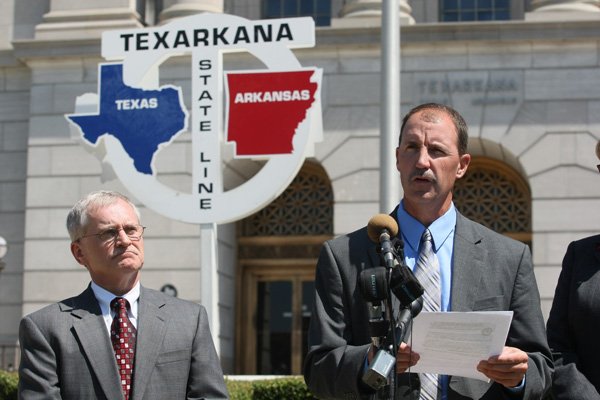 In this 2009 file photo, Randall Harris (left) and Thomas Browne make comments outside the federal courthouse in Texarkana after Evangelist Tony Alamo was convicted on all accounts.

Looking back on nearly 21 years with the FBI, retired Special Agent Randall Harris recalls several of his most memorable cases.

“It was probably the proudest day of my life to be an FBI agent,” Harris said of the scorching July morning last year when Tony Alamo was found guilty of all 10 counts in a federal indictment accusing him of bringing young girls he’d wed as children across state lines for sex.

“I guess I couldn’t help but feel a huge sense of relief because I knew how those young girls felt,” Harris said. “They had always been trained to distrust authority, especially the FBI.”

Harris said that even as Alamo’s victims began to come forward and reveal their experiences, they expressed doubt their abuser would ever be prosecuted and convicted.

“So we all, all of us involved in the case, finally felt like the girls saw the justice system worked,” Harris said. “I’m somewhat embarrassed when people try to give me all the credit because obviously this was such a large undertaking.”

Following the emotionally charged trial for Alamo, supporters held a sign outside the courthouse that read, “Thank you Randall Harris.”

One of the Jane Does who was named in Alamo’s indictment testified that her contact with Harris has led her to aspire to be an FBI agent.

Harris spent several years compiling the evidence that would send Alamo to prison for life.

“I can probably count on one hand how many days I had off, including weekends,” Harris said.

Harris said two other cases involving the sexual abuse of children have left him with vivid memories as well.

Brian Brown represented himself after Harris and his colleagues located him and a 9-year-old girl he’d abducted in a stolen 18 wheeler in Little River County.

Harris testified against the predator and the jury gave him life.

“Even though the investigation wasn’t very lengthy, it still comes to mind,” Harris said of another case involving a man being sought by Pennsylvania authorities.

A young girl was believed to have been abducted by an Internet predator from Texas.

“We had a vehicle description and at last word, it was believed he was traveling somewhere on I-30 in Arkansas,” Harris said. “That only runs from Little Rock to Texarkana.”

Harris said he drove to the Mandeville, Ark., exit and positioned himself where he could see the traffic well.

“I’d only been sitting there 15 or 20 minutes. That was like finding a needle in a haystack. I almost couldn’t believe my eyes when I looked up and there was that car,” Harris said.

Harris turned in his gun, his car and his badge Wednesday.

“I have a lot of mixed emotions, but I’m nearing mandatory retirement,” Harris said. “It’s time for something different. I’m really going to miss the people, though. Not just the other agents but people with other law enforcement agencies.”

Harris has served the Texarkana office of the FBI for about 12 years.

And the FBI’s loss might just turn out to be a gain for Texarkana’s legal community.

Harris has plans to acquire licensing as a private detective and intends to specialize in financial investigations.

Harris hopes to perform work for public and private agencies and for defense attorneys.

Harris, a certified public accountant, was a partner in an accounting firm when he made the switch to FBI agent.

“When I went home and told my wife what I had done, she thought I had lost my mind,” Harris said. “I couldn’t have done it without Sherry, my sweetheart.”

Harris’ interest in the FBI started in childhood. When he was a boy, his mother would tell stories about her days as a stenographer at FBI headquarters in Washington.

“She would tell me about riding up and down the elevator with J. Edgar Hoover,” Harris said. “She had a book, sanctioned by Hoover of course, and I can remember reading the qualifications. They wanted accountants and lawyers.”

Harris saw a recruiting ad in a magazine for accountants and within a year, he was training at the FBI’s academy in Quantico, Via.

“You know, as I recall when I was being cross examined in the Tony Alamo trial, one of the questions they kept asking me was, ’Did I want Tony to be convicted? Did I want him to go to prison,’ Harris said.

“I learned a long time ago that is not my role in the system. My job is to collect the facts.

“The bottom line is, regardless of which side you’re on, the truth is always the truth,” Harris said. “That’s how good agents conduct themselves, as witnesses to the truth.”