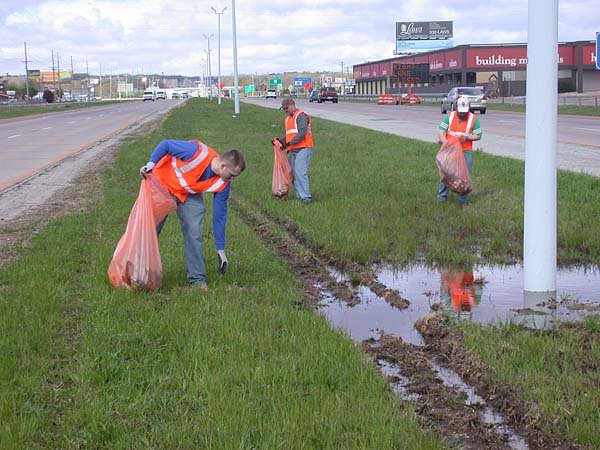 Joseph Langston, director of the Atheist Community of Jonesboro, picks up trash Saturday along U.S. 63 in Jonesboro.

JONESBORO — In a town once called “Fort God” by a national magazine because of its proliferation of churches, visitors driving into the Craighead County town will soon see signs that counter the moniker.

The Atheist Community of Jonesboro, a group of about 50 people who don’t believe in the existence of God, will clean litter along a one-mile stretch of U.S. 63 in Jonesboro four times a year. As a result, the Arkansas Highway and Transportation Department will install two large green road signs proclaiming that the group has “adopted” the highway.

The signs, placed on both ends of the mile-long run, won’t be installed for at least a month.

But some religious leaders are already concerned aboutthe image it could paint for Jonesboro.

“I’m not excited about it,” said John Miles, senior pastor of the First United Methodist Church of Jonesboro. “Not many of us want to be known as the town with the organized atheist group.”

The section is between Caraway and Harrisburg roads, the busiest thoroughfare in the Craighead County town. More than 30,000 motorists travel the road daily, said Walter McMillan, a district engineer for the Highway Department.

“We chose this stretch because of the traffic,” said Joseph Langston, the director of the Atheist Community of Jonesboro. “We were shocked that it was available.”

To obtain a sign, a group must agree to clean a roadway four times a year. “Mostwho clean the road are formal groups,” said Randy Ort, a spokesman for the Highway Department. “We’ll supply the litter bags and they do the work.”

On Saturday, the day before Easter, one of the holiest Christian days, Langston and six other atheists donned orange vests and hit the road for the first time. A Friday evening rain soaked the area, and puddles stood in low areas, but the sun poked out of clouds early Saturday.

The group picked up cans, scraps of paper, cigarette butts and other roadway debris.

Langston struggled with an 8-foot-long wooden strip, bending it until it snapped into smaller pieces to fit in his trash bag.

“How did this get here?” he asked.

Langston said he would donate 25 cents to the Women’s Crisis Center of Northeast Arkansas for every motorist who honked to acknowledge the group’s cleanup efforts Saturday.

He said he has not met much resistance about his group.

“We’re not trying to destroy religion,” he said. “But there’s more here in Jonesboro who don’t believe in God than people realize. If they’re atheists, they fly under the radar. These people have no representation.”

Someone has been tearing down fliers Langston posted at Arkansas State University that seek members for a Jonesboro campus charter for the group.

But for the most part, people have been pretty calm, he said.

It’s a far cry from the reaction to a self-proclaimed Wiccan priest in 1993. Then, Terry Riley led a religious freedom march through Jonesboro after he was evicted from a small shop where he sold books. Hundreds of people lined Main Street and hurled epithets at Riley and his followers as they walked past.

Jonesboro still has its church presence. According to the U.S. Bureau of Census, Jonesboro, with its population of 55,500, has a church for every 400 residents - the second-highest number of churches per capita for large cities in the state. Little Rock ranks first.

The number of churches and the reaction to Riley’s march led Newsweek magazine to proclaim Jonesboro “Fort God.”

A billboard placed on Stadium Boulevard near the university urged people to buy season tickets for the football team’s first year as the Red Wolves. “Howl, yes,” the billboard read. Ministers objected, saying the phrase too closely sounded like, “Hell, yes,” and the billboard was taken down, Hart said.

Later, the university countered with “Howlellujah” on signs.

But leaders here are now taking a somewhat more tolerant and subdued approach to Langston and his group.

“I don’t like it,” Miles said.“It sends a wrong message about our town. But I think it’d be a bad sign if we tried to block them.”

Bob Hester, the director of the American Family Association’s Craighead County chapter, said he is against the sign.

“If it could be prevented, it should be,” he said. “It’s not a good advertisement for the city of Jonesboro whatsoever.”

The state Highway Department tried to block a highway adoption sign requested by the Ku Klux Klan for U.S. 65 in Boone County in 1992, Ort said.

Ku Klux Klan members wanted to clean up one mile of U.S. 65 from where it crosses into Arkansas from Missouri. When they were denied, Ku Klux Klan members sued and eventually won. But,by the time the court hearings concluded, someone else had adopted that stretch of highway, Ort said.

Another Ku Klux Klan group once adopted U.S. 64 in Vilonia, he said.

A Garland County liquor store once had a sign near Hot Springs, and a group wishing to legalize marijuana cleaned a highway in central Arkansas.

The Arkansas Society of Freethinkers, a group of atheists in Little Rock, has a sign on Cantrell Road in Pulaski County, Ort said.

“I’ve not had much opposition to the group’s existence,” said Tod Billings, president of the Arkansas Society of Freethinkers since its inception in 1996.

Most people in the South don’t talk much about atheism publicly because “they’re too scared,” Billings said.

“Hopefully, this group [in Jonesboro] will persevere and they’ll come out of the woodwork,” he added.

The reaction from Jonesboro churches, although muted from its 1993 protest, is still evident.

Denny Beavers, the pastor of Living Word Church in Jonesboro, said he thinks the atheist group’s beliefs - or non-beliefs - are mistaken.

“But they have the right tobe non-believers and to have their sign.

“Maybe this is a good thing for our community,” Beavers said. “As Christians, we need to increase our activities to help others. Maybe they will be the impetus for us to do that.”

Langston said he wouldn’t be surprised if someone vandalized the signs once they are placed, but he hopes people will leave his group alone.

“If the people in this city who call themselves Christians are to live up to their Biblical principals of love and peace, our group should have nothing to fear,” he said.

Print Headline: Atheists to tidy road, get sign in Jonesboro