Chambers are paid to recruit business, but do they deliver? 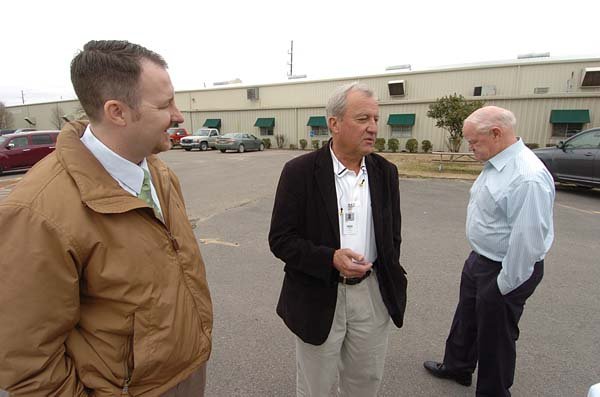 Clarksville Mayor Billy Helms (right) and Matt Wylie (left) talk with Sid Kern of Greenville Tube Co. in March. Helms has named Wylie head of a committee to look for new ways to attract companies to the city.

NORTHWEST ARKANSAS — Clarksville was a city on the rise when Wal-Mart Stores Inc. built a 750,000-square-foot food distribution center there.

The world’s largest retailer spent $50 million to put up the center southwest of the city, and Clarksville annexed the land.

That center employed 500 people when it opened in 1993, the last time a major employer located in Clarksville.

After paying $257,500 to the Clarksville-Johnson County Chamber of Commerce over the past seven years to promote economic development, Clarksville Mayor Billy Helms is ready to change directions.

“Since the Wal-Mart [distribution center] came, we haven’t gotten anything,”Helms said. “We’re going to hire someone whose primary focus is jobs, jobs, jobs.”

Like Clarksville, dozens of Arkansas cities rely on chambers of commerce to spearhead economic development and promote tourism.

Joel Rast, director of the Center for Economic Development at the University of Wisconsin-Milwaukee, has studied how communities court companies, and he questions the effectiveness of the spending.

“There’s a lot of questions about how effective these efforts are in the first place,” he said. “Those of us who study these issues are suspicious whether recruitment of companies is effective at all.”

How much weight a company gives a local chamber of commerce in deciding to locate in a particular town is a great unknown, chamber leaders said. Chambers can work with city governments and help companies scout potential locations in towns, but companies rarely reveal every detail about why they picked a particular city.

“It’s difficult to have an intangible product,” said Perry Webb, president of the Springdale Chamber of Commerce. “You end up in a process where you pat yourself on the back for everything in the community because you don’t know what you caused to come.”

The roles of chambers and the way that they receive and handle cities’ money have raised questions.

Last year in Springdale, resident Anita Davis accused chamber leaders of misspending city tax dollars by rewarding chamber fundraisers with 15 percent commissions on money they raised. In some cases, the commissions were paid in the form of trips to Turkey, Tahiti and other places.

Because the tax dollars paid to the chamber were commingled with other chamber revenue, all of the Springdale organization’s financial records were public under the Arkansas Freedom of Information Act.

Webb defended the chamber’s practice of rewarding fundraisers, and he changed the chamber’s accounting system to separate private and public dollars to avoid private donations becoming public under the Freedom of Information Act.

“We had to build a buffer,” Webb said.

There’s separation in North Little Rock, which pays the most of any city in the state for chamber representation. Last year, it paid the North Little Rock Economic Development Corp. $266,082.

“The number is large,” said North Little Rock Mayor Patrick Hays. “I’m not going to deny that, but what we get is worth 10 times what we invest.”

Hays said the chamber and its corporation played key roles in wooing Caterpillar, which last year announced plans to put a road-grader manufacturing facility intown and provide 600 jobs. A Caterpillar spokesman did not return calls for comment.

Tax dollars for other purposes go to the chamber, too. In 2004, Hays persuaded aldermen to approve a $50,000 annual stipend for five years to help pay to renovate the chamber’s downtown headquarters. In November, the City Council paid another $16,082 toward the project.

A 2008 opinion by the state attorney general raises the question of whether it’s proper for city money to be used to pay debts of the private nonprofit North Little Rock Chamber of Commerce.

The opinion, issued by Attorney General Dustin Mc-Daniel, concerned whether the Helena-West Helena-Phillips County Port Authority could donate money to the Phillips County Chamber of Commerce.

McDaniel said that was unlawful under the Arkansas Constitution, Article 12, Section 5, which prohibits the donation of funds by a “county, city, town or other municipal corporation” to a private nonprofit entity. It bars public money from being donated to a chamber of commerce, McDaniel said.

Hays, however, said he believes that the payments for the building are proper.

“You’ve got to have the hardware to go with the software, if you want to put it that way,” Hays said. “You couldn’t have them in a tent on the parking lot.”

A survey of nearly 40 Arkansas cities shows that most have contracts that set forth what chambers of commerce or economic development corporations must do with tax dollars they receive.

However, in Berryville, Booneville, Harrison and Yellville, there are no written contracts specifying how chambers must spend city money. Oral contracts suffice legally in Arkansas, but written agreements “would be the best practice,” said David Schoen, an attorney for the Arkansas Municipal League.

“This contract issue will be resolved before any future payments are made to the Yellville Chamber of Commerce,” Lane wrote in a March 24 e-mail.

But Berryville Mayor Tim McKinney said there’s no need for a written contract to say why the city paid $10,704 to the chamber last year. The money is for the Berryville Chamber of Commerce to hire a full-time director, and the annual payment is discussed by the City Council when the city budget is reviewed, he said.

“We could write it down if it makes everyone feel better,” McKinney said.

“It’s kind of seed corn,” said Fayetteville City Attorney Kit Williams, a former alderman. “You want to inspire people to come and convince people to stay, but it’s very difficult to know how effective it is.”

It’s less expensive for cities to rely on chambers of commerce to promote economic development rather than doing the work themselves, said Frankie Gilliam, an economic-development specialist at Arkansas State University’s Delta Center for Economic Development in Jonesboro.

“We’ve said there’s no better or best way, or right or wrong way,” said Gilliam of city promotion. “It’s so dependent on that community and its leadership.”

Alan McVey, director of the Delta Center, said the challenge for chambers and cities that provide them with money is “managing expectations.”

“You have to look at this as an investment and be realistic about it,” McVey said.

Everyone in Arkansas knows about Conway’s big get last year: Hewlett-Packard Co. opened a customer-support center with 700 jobs and promises 1,200 jobs by 2012.

“Once you get [a Hewlett-Packard], you’ve raised the bar,” McVey said. “Expectations increase.”

What happened in Conway is a perfect example of regional cooperation among chambers of commerce, said Jay Chesshir, president and CEO of the Little Rock Regional Chamber of Commerce.

Chesshir said he received an e-mail in February 2008 from a group looking for a site for what ended up being the Hewlett-Packard facility. The e-mail was shared with partners in the Metro Little Rock Alliance, an 11-county organization formed in 2003 to promote economic development in central Arkansas.

The computer company soon received information about a half-dozen potential sites in Arkansas. Whatsingled out Conway was the city’s technology park, said Brad Lacy, president and CEO of the Conway Chamber of Commerce and the Conway Development Corp.

Shannon Marnitz, director of central Arkansas sites and consumer support for Hewlett-Packard, credited the chamber of commerce and the development corporation in the company’s selection of Conway.

“HP could have gone anywhere, but it chose Conway in part due to its close proximity to the universities and colleges in Central Arkansas and the favorable economic climate,” Marnitz wrote in an e-mail. “Being a part of the Conway community was a team effort between the governor’s office, the Conway Development Corporation and the chamber of commerce.”

The company also received $43.7 million in state and local incentives to locatein Conway.

“Companies all want incentives, building sites and tax abatement,” said Kathy Deck, director of the Center for Business and Economic Research at the University of Arkansas at Fayetteville. “The cities that don’t have a dedicated revenue source have to find another way. A dedicated sales tax is a community saying it’s ready.”

Many cities also indirectly dedicate portions of their sales tax collections to economic development. That money is not funneled through local chambers but is used to extend sewer lines and waterlines, and to build roads to potential company sites.

That’s smart, said John Mullin, director of the Center for Economic Development at the University of Massachusetts. To attract companies, communities must have flat, clean, 100-acre tracts that are for sale and zoned correctly. The sites must have fiber-optic cables, water and sewer lines, roads, and be within 15 minutes of an interstate and 30 minutes of an airport, he said.

“If you get one thing missing, you are dead meat,” Mullin said. “You’ve got to be totally prepared.”

Rast, the University of Wisconsin-Milwaukee professor, said it’s a risk for communities to build infrastructure to sites that might never be filled.

“What if they don’t come?” Rast said. “What if you invest all that money, and they don’t show up? ... For a city that doesn’t have great prospects to land a great company, to make that kind of upfront investment is very risky.”

Rather, Rast said, cities shouldn’t recruit companies at all. Instead, they should focus on helping their current employers expand.

“It seems a lot of resources are put into smokestack-chasing - trying to convince companies to come to your town - but it doesn’t have much influence on a company’s decision to locate in a place,” Rast said.

Hewlett-Packard’s arrival in Conway served only to remind Clarksville leaders about businesses the city isn’t getting, and how long it’s been since it got one.

“We’ve been struggling,” said Vicki Lyons, director of the Clarksville-Johnson County Chamber of Commerce. “I’ve told them for years we need land for industrial development, a technology park and incentives. You’ve got to have it ready.”

Clarksville has some attractive economic-development assets. .

It’s alongside Interstate 40 and has a 675-student private university, an 80-bed hospital and companies that employ thousands.

But it has no new big companies.

Mayor Helms has appointed Matt Wylie to head an 11-person committee to look into fresh ways to recruit companies.

“There was complacency,” said Wylie, president of First Security Bank of Clarksville. “We’d gotten some nice grabs, but we rested on our laurels.”

The city of 8,579 hired Boyette Strategic Advisors in Little Rock to conduct a study comparing it with other Arkansas cities, including Arkadelphia, Paragould, Russellville, Searcy and Siloam Springs.

The consultant recommended that the Clarksville-Johnson County Chamber of Commerce lead economicdevelopment efforts but under a new structure.

The two organizations under the chamber’s umbrella would have separate funding.

The corporation should rely on private money, plus contributions from the city and Johnson County. It was also recommended that the corporation receive some sales-tax money specifically for economic development.

The City Council in February redistributed the city’s 1 percent sales tax revenue so that 15 percent goes to economic development. That’ll provide $200,000 to $250,000 a year to the corporation, said City Clerk Barbara Blackard.

The Clarksville-Johnson County Chamber of Commerce board of directors voted Tuesday to negotiate with the city in regard to Helms’ plans.

“This should not be about power or greed or anything like that,” Lyons said.

“Is the community now perceived as vibrant and on the move again?” asked Turner Whitson, co-owner of the Clarksville car dealership Whitson-Morgan Motor Co. “The perception within the community and with state agencies was Johnson County used to be growing, but now it’s not. It’s just stagnant, and you hope to change that.”

Print Headline: Chambers are paid to recruit business, but do they deliver?