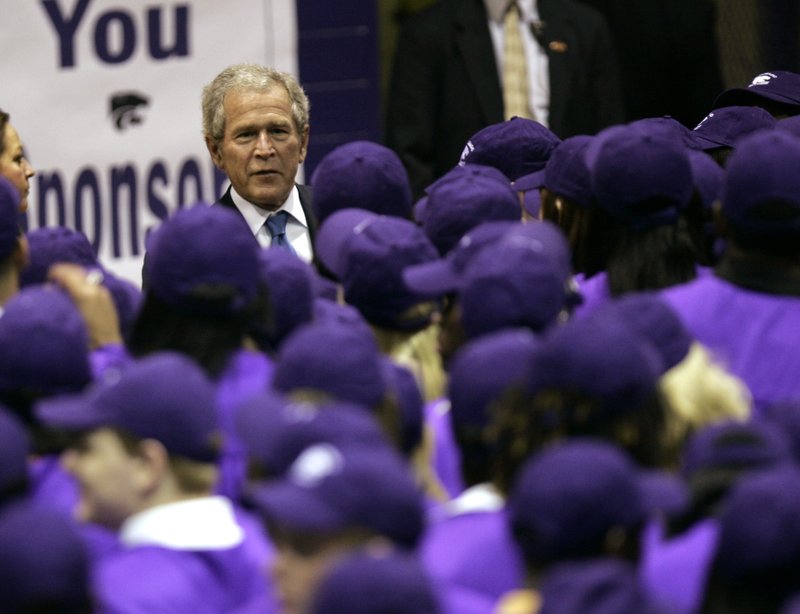 Former President George W. Bush speaks with some of about 500 graduating seniors at El Dorado High School on Thursday, April 22, 2010.

About 450 seniors sat at tables on the floor of the school gym and, with their parents looking on from the bleachers, signed letters of intent to continue their education.

“Some people sign contracts and it doesn’t mean anything to them,” Bush said. “It’s not just a piece of paper; it’s a commitment.”

Bush noted that 20 percent of the students before him would be the first in their families to attend college.

“You’ve got a chance to make it,” Bush said. “Seize this moment.”

More than half of the class qualified for El Dorado Promise scholarships, and 89 percent are expected to attend college, according to the district.

The El Dorado School District had been in “20 years of decline” before the scholarship program was announced three years ago, Murphy Oil President and CEO David Wood said. Since then, enrollment has risen each year. The district says people have moved from numerous other states and foreign countries to take advantage of the program.

“You are not an average ... every day American high school class,” Wood told the seniors.

Bush, who wore a dark suit, blue tie and an American flag pin on his left lapel, was obviously relaxed. He made eye contact with students and pointed and waved. The former president was greeted warmly by the students and parents, though judging by bumper stickers in the parking lot not everyone supported him politically.

Senior Jaynish Amin, a scholarship recipient, said administrators told students the event was about education, not politics. Amin said he wasn’t surprised there were no outbursts.

“I knew nobody would do that on this day,” said Amin, who plans to major in biochemistry at Texas A&M University. Without the El Dorado Promise scholarship, Amin said his family would have trouble paying out-of-state tuition.

Siblings Jacob and Sarah Purinton both qualified for scholarships. Jacob said he’ll study graphic design at Southern Arkansas University in Monticello, while Sarah plans to major in biomedical engineering at Louisiana Tech at Ruston, La. Both said the scholarship lifted what could have been a financial burden.

And they both said they enjoyed seeing Bush.

“It was pretty cool,” Jacob Purinton said. “It was strange ... seeing someone you’ve seen on TV and heard about for eight years right here.”

Another senior, Lillian Revels, plans to study criminal justice at the University of Arkansas at Little Rock and then go to its law school.

Revels said her father was laid off from a timber company last fall and her mother just found a job after being laid off two years before. She would have found a way to attend college, but the scholarship makes it easier, she said.

Having a former president at the academic signing day ceremony made the event more special, she said: “It’s definitely something I’ll remember the rest of my life,” she said.

Bush had a second Arkansas appearance scheduled Thursday, an evening speech at Harding University in Searcy.