Tyson CEO: The next step 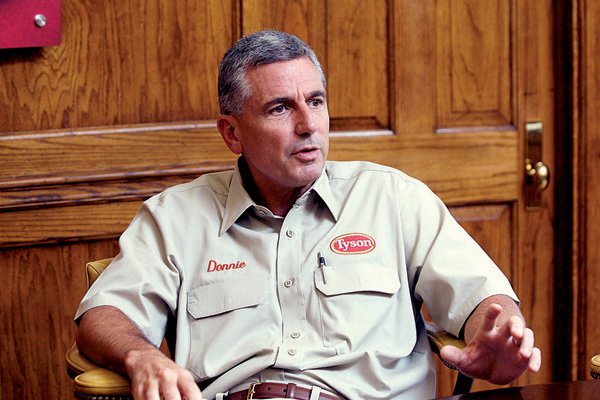 Donnie Smith, president and chief executive officer of Tyson Foods Inc., in his office Wednesday at the Springdale company’s headquarters.

LITTLE ROCK — Tyson Foods Inc.’s president and chief executive officer has held those titles for less than a year but the 30-year company man has turned back the cultural clock at the floundering meat processor and led it into a more profitable future.

Donnie Smith, 51, first started with Tyson as a fresh graduate of the University of Tennessee in 1980. Since then, he has worked himself up from hands-on broiler field support to the oval office that has known only two other non-Tyson family occupants since it was built in 1978.

Smith didn’t move into the large office just steps off the front lobby until early June. He said that before the move the seven people who directly report to him were scattered in various buildings on the large Springdale headquarters campus and getting everyone together for meetings meant a hike through miles of hallways. Now they are all are housed in the same wing of the headquarters.

“We were so busy focusing on what we had to focus on first - getting the company back on track. I didn’t want any distractions then,” he said.

In early 2009 Smith was tapped to head Tyson Foods’ poultry and prepared foods divisions, after retired president and CEO Leland Tollett was called up to serve as interim president and CEO following the sudden resignation of Richard Bond.

Smith was named president and CEO in November 2009. Then Tyson Foods had 117,000 employees and worldwide sales of $26.7 billion.

His first task was to take the company, which ended fiscal 2009 with a net loss of $537 million, back into profitmaking territory.

Smith’s push to improve execution of the company’s strategic plans with new launches and adjusting existing product lines made a significant improvement to the company’s chicken business even as he was focusing on team development, according to an article at Supermarket News.com, an industry website, when it named Smith its 31st most powerful person inits Power 50 rankings in July.

By the third quarter of 2010, reported Aug. 9, Tyson recorded a net income of $242 million, its third successive profitable quarter.

The son and grandson of company founder John Tyson, Don Tyson and his son John Tyson, are still involved with the business, Smith said.

John Tyson was named president and CEO of Tyson Foods in April 2000. That same year, the company became the world’s largest meat producer when it acquired South Dakota-based IBP, then the largest U.S. beef supplier and second-largest pork producer, in a $4.5 billion deal.

John Tyson is now chairman of the board and Don Tyson is a board member. They keep offices next to Smith’s.

When he’s not deep-sea fishing, Don Tyson will come into the office two or three days a week, Smith said. And he speaks consistently, at least once a week, with John Tyson.

Sporting the traditional khaki trousers and shirt with the company patch on the left side and “Donnie” embroidered on the right, Smith seems at odds with the formal style of the oval office he occupies. Its curved, wood-paneled walls are crowned with dentil molding, the square teeth interspersed with egg shapes that pay a subtle tribute to the industry that paid for its construction.

Smith said the outfit is not a required uniform for employees at the headquarters.

Two jumbo posters, mounted near the main doorway of the oval office, lists core values of Tyson Foods and basic tenets of the company’s culture.

Core values are summarized in the statement: “We are a company of people engaged in the production of food, seeking to pursue truth and integrity, and committed to creating value for our shareholders, our customers, and our people in the process.”

Smith said defining cultural tenets has been the most successful change at Tyson since he was named company president.

“We agree that those cultural tenets and core values are relevant to us now. They basically say, ‘Do what’s right. It’s good for business,’” Smith said, adding that they conform with the culture he remembers as being present when he joined the company.

The eight cultural tenets help create an atmosphere of doing good, doing right and doing it well, he said. The first two, “We care about each other” and “Do what you say you are going to do,” are about personal integrity, he said.

“We practice servant-leadership here,” Smith said, explaining that leadership isn’t about a boss-down type of management but about how a manager can help employees reach personal goals and potentials.

“No fear - Tell the truth - Tyson first,” one of the most important tenets, Smith said.

“You have to drive fear out of the organization. There needs to be no fear of the boss yelling at them. Everyone needs to know what they need to do but also have some input into the game plan,” Smith said.

The greatest challenge Smith has faced as Tyson leader is a twofold misunderstanding.

“There seems to be an impression that big is bad, that a big company must be bad, bad for the ecology, bad for the world,” he said.

Then there is a loss of understanding the methods and values of traditional agriculture, Smith said.

“We’re only two generations away from the family farm, but a huge population doesn’t understand what goes into producing their food,” he said. “There are children out there who don’t know that ham is a pork product.”

He’s also worried what that misconception will mean when some of those same children become adults responsible for setting the rules on how agricultural business is conducted.

It’s a misunderstanding that also worries Mike Kidd, director of the Center of Excellence for Poultry Science, Division of Agriculture at the University of Arkansas at Fayetteville.

During the Great Depression in the 1930s, about one in four Americans worked on a farm, so everyone had a good chance to bump into and talk to a farmer during his daily business, Kidd said Thursday.

“Today, a little more than 1 percent of the population works on a farm. There are a lot of people who lack understanding about business, farming and farming business,” Kidd said.

Two generations’ worth of separation from the family farm also means two generations away from people who know the work and science that goes into producing food, he said. The vast majority of the population doesn’t hold farming, or the farmer, in high regard, he said.

During those two generations, innovations by farmers have made a great difference in how people in this country eat, he said.

“So we’re two generations away from people who know what it’s like to go hungry,” Kidd said.

Some analysts, while giving Smith credit for the newly trimmed costs and improved operating margins at Tyson, aren’t sure that his talents can carry the company beyond this year’s records.

Vincent Andrews, a New York-based analyst with Morgan Stanley, said Wednesday that broader industry trends of higher feed costs and increased production will cut earnings in 2011 despite any efforts to repeat 2010’s successes.

Ken Goldman of JPMorgan Chase & Co. said that higher hog and cattle prices with lower supplies will force Tyson’s record beef and pork margins down in 2011.

But lowered stock prices, even in the wake of the stellar third-quarter earnings report, are an opportunity that investors should seize, said Ken Zaslow of BMO Capital Markets. He considered the consensus estimates for 2011 to be too low, the result of exaggerated fears, and that Tyson’s performance can be sustained.

Information for this article was contributed by Shruti Date Singh of Bloomberg News.