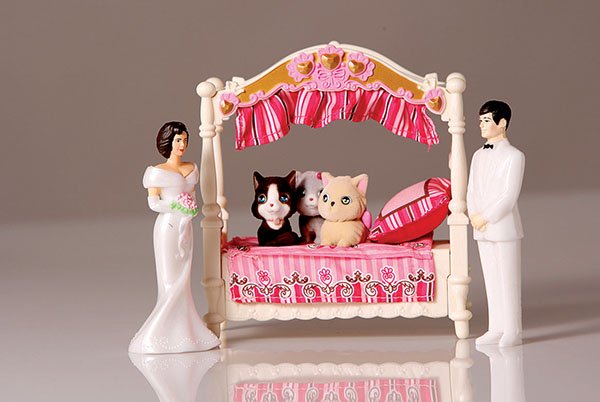 LITTLE ROCK — Towels come in “His” and “Hers” and couples have separate toothbrushes, coffee mugs, his dog and her cat, and sometimes separate banking accounts - all normal behavior. They don’t try to share the same wedding ring. But the bed is different.

The marriage bed goes back to biblical thinking, if not deeper under the covers. The man, the woman, the no more lonely,dark hours. “Come and lay down by my side,” as Kris Kristofferson sings. “Help me make it through the night.”

Most snooze in twos, or try to, and if they break with tradition - uhh-oh.

The Internet tosses and turns over the news that newlywed Kevin Jonas, of the Jonas Brothers, sleeps apart from his wife, Danielle Deleasa. (He snores, according to In Touch Weekly, quoting a “pal” of the celebrity couple.)

And here come another three reports about sleeping dogs that lie, and troubled sleeping trends on the rise:

Close to one out of four American couples sleep in separate beds, according to the National Sleep Foundation. The shift to a separate bed or bedroom is generally a “move of last resort” that “often has a terrible effect on the relationship,” the foundation reports.

About a fourth of new, upscale homes have two master bedrooms, the National Association of Homebuilders says, expecting more to come. Couples who can afford a house of 3,000 and more square feet seem to losing sight of each other in the dark.

And this just in from the backyard: Most dogs and cats not only sleep inside these nights, and not only sleep in bed with people but most sleep with grown-ups, according to the American Pet Products Association.

Sleep expert Dr. David Davila of the Baptist Health Sleep Clinic in Little Rock hardly blinks at the report of couples drifting to separate beds. “It sounds about right,” he says. He questions the pet survey.

“My kids love to sleep with their dog,” the doctor says, suspecting more dogs cuddle up in children’s beds than reported by the pet organization.

Or not. Some people just sleep better alone, he says, like some people enjoy a good massage and others say hands off. A couple’s choice of separate beds wouldn’t automatically make him think something is wrong, “but it could be a clue.”

“If they started out sleeping together, and something has changed along the way,” the doctor is going to wonder what happened.

“Sleepin’ Single in a Double Bed” is the country song answer: “I should have held you, but I let you go ... Oh!”

Troubles of the heart are just one explanation of what drives people to sleep apart, though. Trouble in the nasal passageway is another. About two-thirds of people say their partner snores, according to the sleep foundation, but fewer admit to snoring.

“Snoring is in the ear of the beholder,” Davila says.

Or - she can’t sleep without a little-bitty light on, and it keeps him awake like flashing neon outside the broken window of a cheap hotel. Or - they can’t agree on a comfortable mattress.

Restless couples sometimes ask the doctor to recommend a perfect mattress or pillow set for them, but there is no such prescription.

“It’s a matter of preference,” Davila says. And some people prefer to sleep on the floor.

Custom dictates that a couple should set aside their differences in favor of a single bed. Some hop in the hay together for night after cozy night of eHarmony-like compatibility, snuggler meets snuggler, enjoying the benefits of a soft touch, of sweet understandings, of whispered secrets, of ...

Yes, well, and goodnight to the happy couple. Lights out.

Some share the covers, but they aren’t so happy about it. She wants the TV on; he’s trying to read himself to sleep, and they wind up on opposite sides of a king-size bed, so far apart they might as well be on opposite shores of an ocean of thread count.

Some wish they could, but they operate on different work schedules or circadian rhythms - the morning lark and the midnight owl. She’s up like a grasshopper in the morning. He only wants to see the sun go one direction: down.

Some fall out of bed and togetherness, and the reason is serious enough to warrant a visit to the doctor - sleep apnea, for example: trouble breathing.

The most intimate reasons why two people can’t sleep together rarely leave the doctor or therapist’s office. Bed is “the poor man’s opera,” according to an Italian proverb, and not many people want to sing in public.

But the Internet is a place for anonymous venting, like a big bedroom wall on which the sleepless can scratch off another night’s complaint. Sleepnet.com and talkaboutsleep.com are among websites that deal with sleep disruptions, including insomnia (can’t sleep), narcolepsy (too much sleep) and restless leg syndrome (kicking).

Forums and message boards on these and other sites find people describing strange tricks the Sandman plays on them:

“My wife is telling me that I yell in my sleep ... I was yelling, ‘Ow!’ repeatedly. Does anyone else do this?”

Here, a man relates that he wakes up with a jolt night after night, thinking he is dead. There, a woman posts that she sleeps through the clamor of three alarm clocks, but her husband doesn’t: He shoves her off the bed. Another woman worries if it’s true that she barks in her sleep.

“For some reason, women refuse to sleep in the same house as me,” one guy airs the bedsheets online. “Now, I know they’re just trying to make our relationship work, huzzah!”

Davila’s research shows that people go through several stages of predictable companionship in the bunk - from baby bassinet, to cuddle some childhood, to the twosome tango, to alone in the nursing home bed that finally becomes a necessity.

The baby asleep in mama’s arms wouldn’t dream of being alone. But sooner or later, like it or not, he wakes up in his own bed. He has been, in the language of bed training, “transitioned.”

Teenagers most often sleep alone, and college might come as a real wake-up call. The dorm room teaches how to make the best of another person’s late-night behavior, such as sleepwalking.

Marriage and family complications can rumple the romantic idea of pairing up. Children cry in the night, requiring attention. Bed isn’t always the best place to sleep. The doctor sees “periodic fleeing of [the] bedroom for protected sleep time” and “loss of companionship.”

By middle age, the husband is more apt to snore; the wife is more apt to twitch. By middle to late years, women “enter peri-menopause with hot flashes and night sweats.” The room can’t be cold enough to suit her. He is on fire with heartburn.

Couples who sleep apart, and miss each other enough, generally can find a way back to the sack. Compromise is possible, and medical treatment is available for many conditions that hinder sleep.

Sometimes, the trick to sleeping together is sheer determination. About a third of people who sleep together say their bed partner gives them a fight, according to the sleep foundation’s 2005 report, but not so many go to separate corners.

“It’s amazing what people actually will put up with,” Davila says.