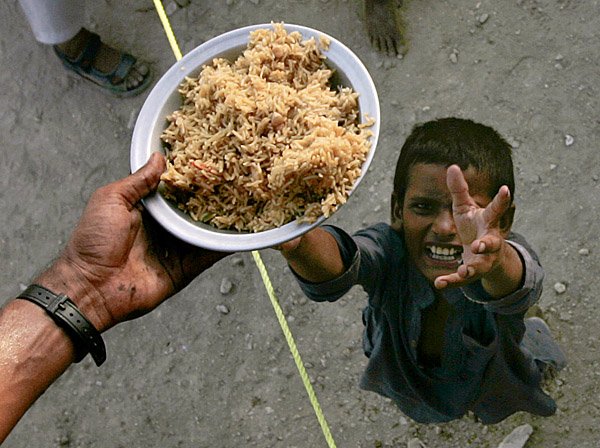 A boy receives relief food at a camp for flood affected people on the outskirt of Sukkur, in southern Pakistan.

SHIKARPUR, Pakistan — Weeks after downpours first battered northern Pakistan, submerging tens of thousands of square miles, killing about 1,500 people and leaving millions homeless, those floodwaters are still sweeping downriver and through the south.

The water came in the morning, quietly sweeping across the rice paddies and into the village. Within hours, it was as high as a man’s shoulder and Abdul Nabi had lost his harvest, his mud home and all 10 of his buffalo.

It had barely been raining at all.

“This is the fate of the country,” said another flood victim, a bitterly angry man named Habib Ullah. “It is the bad luck of Pakistan.”

Pakistanis have lived through a deeply corrupt political establishment, a long history of military coups, a bloody Islamist insurgency and widespread poverty. Up to a third of its 170 million people live in poverty. Five years ago, entire towns in Pakistani-controlled Kashmir were leveled by an earthquake that killed 80,000 people.

Now, after years of low rainfall that had left many farmers struggling at the edge of financial survival, they face the worst floods in generations.

“It’s not just the scale [of the floods], it’s the depth as well,” said Arif Jabbar Khan, the humanitarian operations manager for the aid group Oxfam Pakistan. “People have lost most, if not all, of their assets. People save all their life, and now it’s all gone.”

Nabi understands that kind of loss.

“I have seen floods before. We had them in the 1970s. But I have never seen anything like this,” said Nabi, 63, a thin, bearded man whose wrinkled face reflects his many years working in his fields.

Behind him, nearly 50 members of his extended family - with their mattresses, bicycles, battered metal trunks, cooking pots, plastic buckets and a couple of electric fans - were piled onto a trailer pulled by a farm tractor. The family had spent the past three days sleeping in the open in Shikarpur, a town now inundated with people who had fled the floods. Now, they were headed to a larger city hoping for help.

He’d been lucky that day - he’d managed to grab a 22-pound bag of flour when an aid group drove through town throwing bags of food to a seething crowd - but he seemed stunned at how little help he’d received.

“Nothing. I got nothing from the government. We saw these big vehicles with officials driving past, but they didn’t stop. They didn’t even give us a hand,” he said.

More than anything, though, he was worried most about his buffalo. He supports dozens of people with his small rice farm. The buffalo are - were - his most valuable possession.

“Maybe they swam, maybe they drowned. I don’t know. But either way they are gone,” he said, looking as if he was about to cry.

The scenes from Pakistan are wrenching, but the global response has been criticized as sluggish.

The United Nations says it has yet to raise half its $460 million target. The World Health Organization has received commitments for just 25 percent of the $56 million it has asked for. One aid group has called donations from European countries “feeble.”

Relief agencies say they are puzzled by the lack of generosity, while analysts cite a mix of factors: the disaster’s low death toll, its timing during the northern hemisphere’s summer holidays and fears that aid money will be squandered through corruption or make its way into the hands of the Taliban.

“We are perplexed as to why the international community has not responded as generously and as quickly as it can do,” said Ian Bray, a spokesman for Britain-based aid agency Oxfam.

After a slow start, the U.N. and relief agencies say donations are now rising as the scale of the calamity becomes clear. But the response has been far less spectacular than the global generosity that followed Haiti’s earthquake and the 2004 Indian Ocean tsunami.

Meanwhile, Russian President Dmitry Medvedev on Wednesday offered Pakistan support in dealing with catastrophic floods as he hosted the leaders of Afghanistan, Pakistan and Tajikistan for talks on efforts to stabilize the region.

Medvedev began his meeting with Pakistani President Asif Ali Zardari in Russia’s Black Sea resort of Sochi by expressing condolences over the floods that have killed about 1,500 and affected some 20 million people - or one Pakistani in nine.

“We are mourning together with you and we are ready to provide all the necessary assistance,” Medvedev said.

A Russian Emergency Situations Ministry plane delivered relief supplies to Pakistan on Tuesday, and another such flight will be conducted today.

Information for this article was contributed by Jill Lawless, Bradley S. Klapper, Paisley Dodds, David Stringer and Vladimir Isachenkov of The Associated Press.