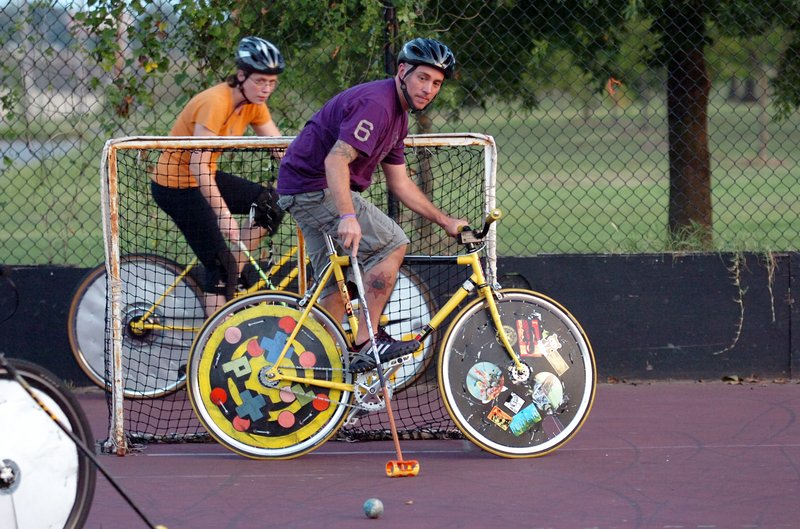 Dave O'Brien (right) defends the goal as Aly Signorelli rounds the back of the goal during a game of bike polo. Little Rock Bike Polo (LRBP) plays several times a week at MacArthur Park on the old roller-hockey court.

LITTLE ROCK — When play starts at 8 p.m., well, more like 8:07, the old field hockey courts at MacArthur Park are bathed in light.

It is not a flattering light.

The surface is cracked and peeling, fading from a shade that was, perhaps, brick red or terra cotta. The boards that frame the bottom edge of the courts, meant to deflect a ball, are warped, and some have pulled away from the frame. The courts area is framed by black chain-link fencing, snaked through with ivy.

Three times a week the Little Rock Bike Polo league rolls onto the courts for three on-three matches that normally only last until one team scores three goals. There are a lot of players to rotate in and out by 11 p.m., and between the late starts, crashes and on court maintenance, things can drag.

On this particularly pleasant Wednesday, Julie Pitt stands center court holding six mallets behind her. She shuffles them and tosses one to the right, one to the left, and so on until the mallets are divided and two new teams of three are formed.

A minute or so into the first scrimmage there’s a crash, a bike loses its chain and Nathan Vandiver, the team handyman, goes into work mode.

A few minutes in, there has already been a scrum and one wicked pass.

But by 8:30 only one game has been finished, and the group is looking for more players to “throw in” their mallets, signaling their desire to play, for the next match.

A single spotlight anchored to a streetlight is aimed at one end of the court. The other side is in shadows.

“It gets real hard about this time of night,” says Dave O’Brien, 43, of Little Rock. “Down there, if you’re playing with a red ball you’re probably not seeing it.”

The league has been working with a number of groups, including the Clinton Foundation and Little Rock Parks and Recreation, to refurbish the courts. They’ve recruited volunteers for a big workday Sept. 11.

New lighting will have to come later.

An ambitious blueprint calls for more lights throughout the park and a driveway between Commerce Street and McMath Avenue, which runs by the courts. Doubling the size of the lake, more landscaping and new pathways are also part of the dream for MacArthur Park. The price - $15.8 million in 2009 dollars.

But there’s no time frame or money to make it happen, said Truman Tolefree, director of Little Rock Parks and Recreation - which makes volunteer efforts all the more welcome.

“It’s the kind of thing that kind of catches fire and other people get the fever,” Tolefree said.

Little Rock Bike Polo members have been collecting wood, scrap 2-by-4s, that will be used to re-skin the court - in other words, replace all the planks framing it. The surface will be patched, not replaced.

If they get the wood in time, the Clinton Foundation, with about 40 volunteers mostly from AmeriCorps, will provide manpower on National Volunteer Day, Sept. 11. “The goal is to finish that day,” O’Brien says.

Jordan Johnson, a spokesman for the foundation, said in early August that volunteers were still trying to find used bleachers to install. He said if volunteers weren’t being used, it would cost about $20,000 to pay for the preparation and the work that will be done Sept. 11.

Anyone interested in volunteering can e-mail Keith Canfield at kcanfield@clintonfoundation.org.

The foundation has worked with the Mac-Arthur Park Group and Little Rock Parks and Recreation before and plans to continue doing so. “This group is not going to stop in September.”

As for using the new and improved courts, he said only a handful of the volunteers have tried out bike polo, but “they have the bumps and bruises to prove it.”

Pitt says new players can be “a little dangerous out there.” Crashes, bumps and scrapes are all par for the courts.

The team also has had some growing pains.

O’Brien, one of the founders, said they began playing last fall, originally trying out the Little Rock River Market pavilions before gravitating to these old courts.

The sport started in Ireland more than a century ago and came to the United States just before the turn of the 20th century. Originally it was played on grass. Hard-court play cropped up on the West Coast in the 1990s.

Today, there are leagues around the country.

About 30 players are active in the Little Rock league, but rarely do that many show up for practices on Mondays, Wednesdays and Saturdays.

The game, in theory, is fairly simple. Ride a bike, hit a ball with a mallet, try to shoot the ball into the goal zone to score. But there are quite a few rules.

Ball jointing, or dragging the ball with the mallet, is limited, for instance. But the overriding rule is somewhat subjective: Don’t be a jerk.

Any bike can be used, but it should be single speed. There are three players to a team - one to guard their team’s goal, one to chase the ball, one to provide backup. Teams can use nets or cones for their goal.

Feet should stay on pedals at all times. If they don’t, the offending player will have to tap a bell at midcourt.

If a player hits from behind the goal the ball must be passed before scoring. Balls come in three densities that correspond with temperature. The red, or hot-weather ball, is the hardest and most-often used. Orange balls are less dense, as are yellow, which show up better at night.

The mallets are made using drilled-out ski poles, with gas pipes screwed to the top. The end of the mallet should be wrapped to prevent injury, and so should a bike’s handlebars and bar ends. Bare bar ends would cut like hole punches in a crash.

The front wheels should have spoke guards.

He once swung his mallet into his front spokes. “I found out what the front wheel covers are for.”

Another time, he squeezed the mallet, thinking he was squeezing the brakes, resulting in a crash.

“It’s like NASCAR on bicycles,” he says of bike polo. “This is not somewhere you want to ride your fancy $2,000 road bike.

“The key thing is to keep the ball and mallet - and someone else - out of your spokes.”

Pitt, who with Ezell was one of about 15 spectators watching the first game of the evening, says that learning to play was tough.

“When we first started, none of us knew how to play polo at all,” Pitt says. “We biked around in circles at first.”

Hitting the ball while riding was a tricky skill.

“One of the hardest things is not to put your foot down,” Pitt says. “When someone first comes, we tell them to focus on that.”

The other challenges include “being able to handle a ball and look where you’re going.”

“A lot of it is low-speed biking skills,” she says.

She says avid bikers tend to catch on more quickly than casual ones, and that she enjoys the game because it’s outdoors and she has “never been a gym person.”

At first she wasn’t sure if she’d be playing this night. Her tire’s tube had popped from sitting too long in a hot car, and Vandiver was busily swapping out the tubing, filling the new rubber with air, then popping the tire back on.

The 28-year-old Little Rock resident says he became a bike mechanic in college. He started riding when he was 12 and now does triathlons. “I’m just interested in anything to do with bikes,” he says. “You don’t get to do many team sports on a bike.”

He says the team’s turning point was the River City Rumble. “We learned so much.” The other leagues “were playing a completely different game than [we were].”

“We’ve typically been more involved in other types of biking.” She says polo’s a good workout but quick: “You can’t get in there and play two hours.”

She and other relative newcomers praised the relaxed atmosphere and camaraderie. No one ever stays angry for more than five minutes, Signorelli says. “No one’s hard on new people.”

Vandiver says trash talk does pick up during tournaments. But practice sessions are low-key.

“It’s probably one of the most welcoming groups we have in town,” Ezell adds. “There’s hardly ever any cussing out there.”