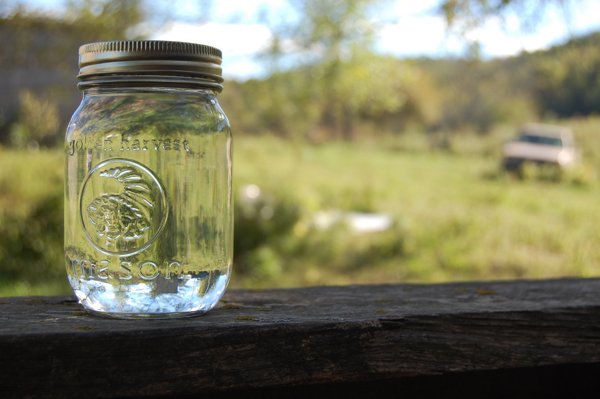 At the end of a long gravel road where a still is hidden in a barn, a lone Mason jar of fresh moonshine sits atop a fence rail.

THREE RIVERS AREA — Under the watchful eyes of a few cows, a truck ambled up the bumpy hillside on one of Independence County’s back roads. The dust began to settle as the truck rolled to a stop near a ramshackle barn. Inside the barn sat a moonshine still.

Although making moonshine is a dying art, the business is still alive and well in the Ozarks.

Several moonshiners manufacture the hooch to support their own drinking habits, but during the Depression, moonshining was a means of survival.

At that time, it wasn’t uncommon for most farms to have a working still hidden somewhere among the livestock and crops, using the revenue from the stills to feed their families.

Moonshine got its name from the alcohol being moved by moonlight to decrease the chances of being detected.

“We plowed up a garden and buried moonshine and planted turnips on top of it,” said one old moonshiner, who asked that his name not be used. “You couldn’t make it and sell it at the same time or you’d get caught.”

Growing up in the moonshine business, the 79-year-old moonshiner said, for many years, he drank two pints a day and swears the moonshine has improved his health. He also said he not only made moonshine, but he sold it, making deliveries all the way to Little Rock from the Ozark Mountains.

Distilling was once a big part of American farm life, and it was a traditional Ozark craft similar to soap or candle making. Even many years after Prohibition ended, a good number of stills remain in Arkansas.

Old-time moonshiners took pride in their recipes, and one such moonshiner is 64-year-old Larry Bishop, who is running the Arkansas Moonshine distillery in Newport, for which the late Ed Ward of Batesville obtained the first and only license to legally produce moonshine in Arkansas.

Bishop has been making moonshine in a washtub for more than 40 years, so who better to make the perfect batch of legal shine than a longtime moonshiner who loves the heritage? Now he’s at the sanitary distillery making 1,000 gallons a day and not looking over his shoulder for the revenuers.

“Forty years ago, an old gentleman asked me if I’d help him,” Bishop said. “We went out on a back road and walked about a half mile to a big cave, and there was a st\ill.”

Bishop said the old moonshiner was good at his craft, and Bishop said he learned not only how to make good hooch, but he also learned how to watch the woods all the time.

Old-time moonshiners will always make their product on the other side of the law because old habits are hard to break.

“You don’t do something for 50 years and get up one morning and change your ways,” the anonymous moonshiner said. “You get used to looking over your shoulder — it’s just a game.”

Not only do moonshine’s roots run deep in the Ozarks, but it is said that NASCAR’s roots are deeply embedded in running moonshine.

Many bootleggers used a shock wedge to increase their car’s handling speed. According to the article “The History of NASCAR” at PhiladelphiaAtHome.com, Glenn Dunnaway, the winner of the first NASCAR race, had an illegal shock wedge in his ’47 Ford because it had been used for bootlegging earlier that week.