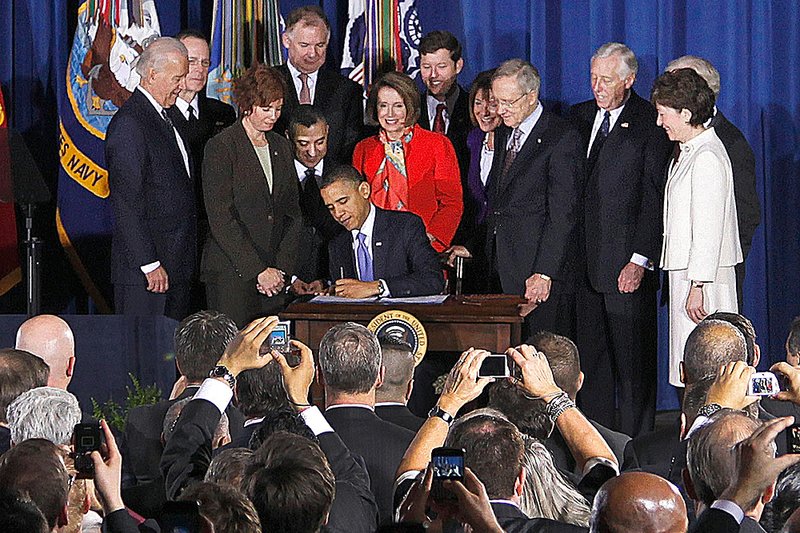 At the Interior Department on Wednesday, President Barack Obama signs the repeal of the ban on homosexuals serving openly in the military.

WASHINGTON — President Barack Obama signed a new law Wednesday that will allow homosexuals for the first time in history to serve openly in America’s military. He urged those kicked out under the old law to re-enlist.

Framing the issue as a matter of civil rights long denied, Obama said, “We are a nation that welcomes the service of every patriot ... a nation that believes that all men and women are created equal.”

In repealing the 17-year-old policy known as “don’t ask, don’t tell,” the president said, “This law I’m about to sign will strengthen our national security and uphold the ideals that our fighting men and women risk their lives to defend.”

The new law ends a policy that forced homosexuals to hide their sexual orientation or face dismissal. More than 13,500 people were discharged under the rule since 1993.

The change won’t happen immediately. The Defense Department must draft a plan for putting new regulations into place, and the president and military leaders must certify that allowing homosexuals to serve openly won’t hurt the nation’s war efforts. Spokesman Robert Gibbs said implementation may take “a matter of months.”

“I hope those ... who’ve been discharged under this discriminatory policy will seek to re-enlist once the repeal is implemented,” Obama said.

Gays in the military

“We are in two wars and we need qualified candidates,” Dunning said after the ceremony. She said it was unclear how many discharged under the old law might seek to rejoin and whether all “have completely healed ... [and] trust the military is going to treat them fairly.”

The question of reinstating those previously discharged was addressed in a months long study done by the Pentagon earlier this year on how the armed forces might go about implementing a repeal of the policy.

The study recommended that the Department of Defense issue guidance to all the service branches permitting those previously separated on the basis of homosexual conduct “to be considered for reentry, assuming they qualify in all other respects.”

It said the fact that they were kicked out for homosexual conduct should not be held against them, but added that if they received an “other than honorable” discharge for accompanying reasons, those should be considered.

Critics, including Sen. John McCain, R-Ariz., and the commandant of the Marine Corps, Gen. James Amos, said repealing the ban would be a threat to order and discipline in the military in a time of war. They asked that any change be delayed.

Opponents also argued the move could prompt some to leave the services or to not sign up in the first place and remain a distraction at a time when the armed forces are fighting two wars.

Overall, 30 percent of survey respondents said ending the ban would have a negative effect, an opinion shared by 40 percent to 60 percent of respondents from the Marine Corps and largely all-male combat units.

Obama signed the bill using 15 ceremonial pens at the Interior Department, a location chosen to accommodate a larger-than-normal audience for a bill-signing.

“I say to all Americans, gay or straight, who want nothing more than to defend this country in uniform, your country needs you, your country wants you, and we will be honored to welcome you into the ranks of the finest military the world has ever known,” Obama said.

“No longer will tens of thousands of Americans in uniform be asked to live a lie, or look over their shoulder in order to serve the country that they love,” Obama said.

As military leadership and advocacy groups have warned in recent days, Obama also noted that the repeal will not go into effect until the government goes through additional steps to roll back the old policy.

Speaking to reporters later in the day, Obama said he spoke to the military-service chiefs about readiness after Congress voted for repeal.

“They have all said that we are going to implement this smartly and swiftly, and they are confident that it will not have an effect on our military effectiveness. So I’m very heartened by that,” Obama said.

Obama said: “We are not going to be dragging our feet to get this done.”

Pentagon personnel chief Clifford Stanley and his staff have already started working to put together an action plan based partly on recommendations from the study. The plan will look at a host of questions, from how to educate troops on the change, to how sexual orientation should be handled in making barracks assignments.

During his 2008 campaign, the president vowed to repeal the law and faced pressure once in office from liberals who complained he was not acting swiftly enough.

Obama on Wednesday recounted the story of Lloyd Corwin, an Army private during World War II who tumbled into a 40-foot ravine during the Battle of the Bulge and was “as good as dead.” But a friend and fellow soldier, Andy Lee, turned back and rescued Corwin.

Four decades later, when the two friends reunited, Lee told Corwin he was homosexual. “He had no idea. And he didn’t much care,” Obama said. “Lloyd knew what mattered. He knew what had kept him alive.”

Obama also said that during a recent visit to Afghanistan, he shook hands with a female soldier who pulled him close and whispered to him that he needs to repeal “don’t ask, don’t tell.”

“And I said to her, ‘I promise you, I will,’” the president recalled.

Homosexual activists and other supporters packed in the room hooted, applauded and shouted in joy.

The atmosphere was jovial and a little rowdy, with chants of “Yes, we did!” and “U-S-A, U-S-A!” Many shouted out, “Enlist us now!”

“I am just overwhelmed,” Obama said. “This is a very good day.”

The legislation authorizes defense programs including $159.3 billion for the wars in Iraq and Afghanistan.

Information for this article was contributed by Pauline Jelinek, Ben Feller and Lolita C. Baldor of The Associated Press; by Roger Runningen, Catherine Dodge and Tony Capaccio of Bloomberg News; by Peter Nicholas of the Tribune Washington Bureau; and by Margaret Talev of McClatchy Newspapers.