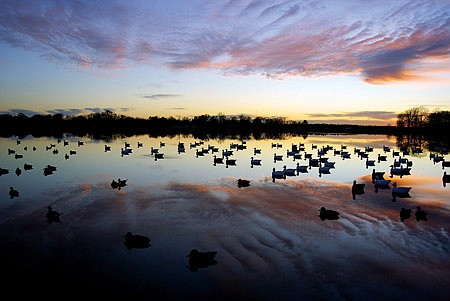 A big spread of snow-goose decoys helped draw birds close to the blind from which the author recently hunted.

TRI-LAKES AREA — Snow geese fell from the sky like pelting snowflakes of a winter blizzard. Thousands blanketed the ground already, but hundreds more flew in to join them.

“It’ll be difficult competing with a flock that big,” my hunting companion Mike Checkett said. “But some should fly over us on their way to that f lock, and maybe we can coax them into our little spread of decoys instead.”

“Little” did not accurately describe the group of decoys before us. Hundreds f loated on the water of a small reservoir near the little town of Bayou Meto in eastern Arkansas. Hundreds more were scattered along the shore.

Mike was correct, nevertheless. It would be hard to coax birds our way when 10,000 live, calling snow geese were feeding nearby.

For the first hour of our afternoon hunt, we sat in a pit blind and watched as geese skirted our spread to land in the field bustling with their brethren. But soon I saw a small flock of snow geese that had seen our decoy spread and were coming our way. Mike saw them, too.

Mike worked as state waterfowl biologist for the Arkansas Game and Fish Commission from 2000 to 2003, then took a job with Ducks Unlimited in Memphis, Tenn., where he continues his career as a waterfowl biologist and communications specialist. He is a decoy carver, layoutboat builder and avid hunter who has traveled throughout the U.S. and Canada in pursuit of ducks and geese. He’s also extraordinarily talented with a snow goose call, as he was about to show.

Mike called loudly, and the geese made a beeline straight toward our blind. At 10 0 yards, they cupped their wings and begin swinging back and forth in the air.

Too late, the birds realized the ruse. “Now!” Mike shouted, sliding back the top of the blind. A barrage of shots rang out.

Until then, Mike’s yellow Lab Elvis had sat patiently beside his master. On Mike’s command, the dog bolted from the blind, splashed through the shallow waterand retrieved the geese we had killed. Before the day ended, he’d have a chance to fetch many more, and Mike and I enjoyed several hours of extraordinary wingshooting.

The winter staging of snow geese in Arkansas is one of the world’s most incredible wildlife spectacles. In prime hunting areas in the Delta and Arkansas River Valley, it’s not unusual to see tens of thousands of snow geese daily.

The synchronicity of their movements is unforgettable: skeins of white, some more than a mile long, highlighted against bluebird skies or black thunderheads as the birds ride the towering wash of winter winds. Mere inches separate the individuals, yet one never touches another.

Snow geese once were much less common in Arkansas, but populations skyrocketed in the 1990s as winter wheatplantings expanded. Biologists now worry that snow geese are so numerous they’re deteriorating breeding-ground habitat in the far north.

Despite the abundance of geese, however, there are still relatively few serious goose hunters in the Natural State. Some duck hu nters have switched part of their attention to snow geese, but for the most part, the vast flocks of birds go about their daily business with little attention from hunters.

There’s no such thing as a casual snow goose hunt, one reason many hunters don’t participate. This sport requires huge decoy spreads and a substantial investment of time and effort.

First, hunters must study movement patterns of geese where t he hu nt w i l l ta keplace, then secure permission to hunt where concentrations are located. (Most hunting is on private land.) When geese start using a field, they stay until the food supply is exhausted. Being there after they’ve started using the field and before they’ve eaten it out is the trick.

Hundreds of decoys are needed to attract the birds. Most hunters use commercially manufactured decoys supplemented with white trash bags or cardboard silhouettes. When the spread is arranged, the hunters hide in a blind or, dressed in snow-camo clothes or white smocks, lay down right among the decoys. Many use a waving white flag to create movement in the spread. This and good calling attract the birds’ attentionand draw them near.

It’s important not to go in undergunned. Use a 10-gauge or a magnum 12-gauge with large shot. Nontoxic shot is mandatory everywhere, and most hunters opt for sizes BB, BBB or T.

Those who are new to the sport might consider hiring a guide, who can show hunters the ins and outs of snow goose hunting. After experiencing a hunt firsthand, a hunter will know whether he really wants to make the required investment in time and equipment to hunt on his own. Best of all, guides do all the work. The hunter need not spend hours scouting, gaining hunting permission, and setting and retrieving decoys. For a reasonable fee, reputable guides do all this, and clean and pack the birds, too.

Mo s t A r k a n s a s go o s e guides provide hunting trips in the vicinity of Stuttgart.Learn how to contact them by calling the Stuttgart Chamber of Commerce at 870-673-1602 or visiting its Web site, www.stuttgartarkansas.org. It’s more difficult finding guides in the northeast Delta and Arkansas River Valley, but a Web search using the term “Arkansas goose hunting” will turn up many. The Jonesboro (870-932-6691, jonesborochamber. org), Cross County (870-238-2601, crosscountychamber.com) and Brinkley (870-734-2262, brinkleyar.com) chambers of commerce often can provide leads on guide services available near those cities.

Although hunting snows is time consuming, it’s a sport many of us find irresistibly attractive. Goose hunting allows us to perfect our skills with a shotgun and to go afield withmen we enjoy and admire. But most of all, it gives us another excuse to be outdoors on those cold days in January and February when common sense dictates it might be best to stay home. Until you have sat beneath a sky full of living snowflakes, you have missed one of hunting’s greatest pleasures.

The “regular” snow goose season in Arkansas, with a daily bag limit of 20 birds, ends Jan. 31, 2010. But thanks to a special “Conservation Order” season that runs from Feb. 1 through April 25, 2010, waterfowlers have more opportunities than ever to hunt these plentiful birds. There is no bag limit during this late season, and unlike during the regular season, hunters may use unplugged guns and electronic calls. Shooting hours are longer, too: from onehalf hour before sunrise until one-half hour after sunset (local time).