Modular design among projects to revitalize neighborhood by Kristin Netterstrom | February 11, 2010 at 3:31 a.m. 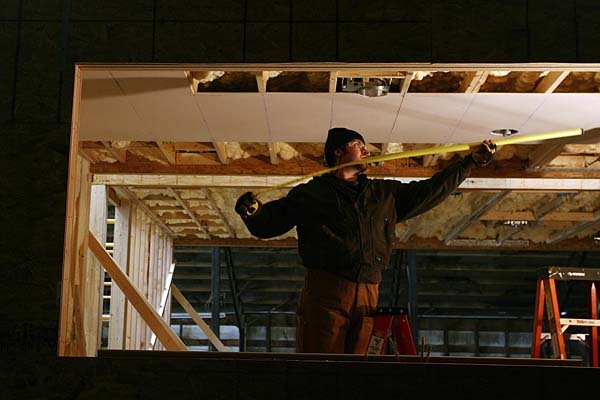 Arkansas Democrat-Gazette/WILLIAM MOORE 4th year architecture student Josh Matthews from Fayetteville takes a measurement while hanging drywall in the kitchen of a modular home Wednesday, February 10, 2010 in the Government Avenue Warehouse off Sixth Street in Fayetteville. The house was designed and is being built by University of Arkansas architecture students with funding from the Downtown Little Rock Community Development Corporation and will be sent to Little Rock April 1st for installation in a low-income area.

LITTLE ROCK — The snow stopped construction at 1517 Commerce St., but work on Quincy and Stephanie Scott’s new house next door was well under way Wednesday in a warehouse 188 miles away.

In April, the same team of students that designed the 1,200-square-foot home will piece together the prefabricated structure on the corner of Commerce and 15th Street, filling an empty lot surrounded by blocks of houses built in the early 1900s.

The modular home is the latest in a series of environmentally-conscious housing designs that the Downtown Little Rock Community Development Corp. is building in the Pettaway Park neighborhood. The area east of Main Street has lost older homes from neglect and a 1999 tornado.

The nonprofit organization broke ground in November on a nearby home being built with insulated concrete walls. The group is also building the home next to the Scotts and across the street from their lot at 1519Commerce St.

“We believe this could be the tipping point that can help us recover from the devastating tornado in 1999,” said Carrie Young, a Pettaway Park resident who bought her home from the same community-development corporation in 2003 and is happy to have more neighbors.

Young and about two dozen others were on hand Wednesday morning for a “groundbreaking” on the Scott’s house, a boxish frame with floor-to-ceiling windows. While most of the students worked on the structure in Fayetteville, several others traveled to Little Rock to start digging the foundation Wednesday.

The house is a first for many of those involved.

For the Scotts, it’s their first mortgage. With a large recessed front porch and an open floor plan, the $109,500 house is exactly what they wanted.

“We love being close to downtown and not far from the interstate,” said Quincy Scott, who lives in west Little Rock with his wife. “To have a great neighborhood, you have to put something into it.”

The Scotts, who are in their late 20s, said they felt they were setting an example for people who want to live downtown and those who want to build energy-efficient homes.

The home has a small floor plan, overhangs that provide shading, spray foam to seal gaps, an energy-efficient furnace and tankless waterheating system. The home will also be landscaped with various types of gardens.

The modular design is also the first of its kind in the Pettaway Park neighborhood, which has become a building ground over the past five years for modern looks and energy-efficient houses designed by architecture firm Paul Page Dwellings and others.

“The eclectic nature of the housing stock is really going to be an attraction to this area,” Mayor Mark Stodola said about the different building styles rising in the neighborhood.

The modular home is also the first such project for University of Arkansas Fay Jones School of Architecture students.

“It was a way for us to do the majority of the building on campus but have a broader impact across the state,” said Michael Hughes, an associate professor and the school’s design-build program director.

The partnership sparked last year, when the school and the Little Rock development group started discussing a project that would benefit students and homebuyers.

Students are learning the ins and outs of building a home, from working with clients on a design to meeting city building codes to landscaping the property. The homeowners were able to give their input and receive a break in the price since there are no labor costs.

The team of about 25 students visited the Little Rock neighborhood last year. Then they met with the Scotts, who wanted an energy-efficient home. Quincy Scott started his own renewable-energy consulting firm last year.

“I actually think this is a great idea,” he said about the modular approach. “It’s smarter. It’s less waste. We would have been shut down because of the weather.”

The students drew three different modular designs and the Scotts picked details of each that they liked for the final product.

They will get the keys to their new house in May.