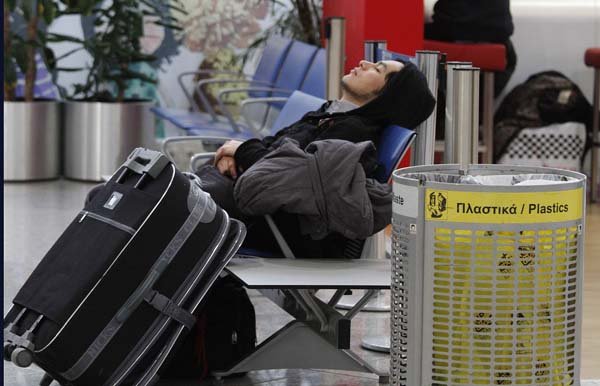 A stranded traveler sleeps on a chair in Athens airport after her connection flight was canceled due to a 24-hour air traffic controllers' strike, part of a civil service walkout against wage freezes on Wednesday, Feb. 10, 2009. Thousands of civil servants and Communist Party-affiliated workers gathered in Athens and Thessaloniki, Greece's second-largest city, Wednesday for demonstrations against the center-left government's austerity plan to ease Greece out of a major debt crisis that has alarmed European Union partners and international markets, weakening the euro.

ATHENS, Greece — A strike by civil servants shut down schools and hospitals and grounded flights across Greece on Wednesday, as unions challenged cutbacks aimed at ending a government debt crisis that has shaken the European Union.

Air traffic controllers, customs and tax officials, hospital doctors and schoolteachers walked off the job for 24 hours to protest a government freeze on salaries and new hiring, cuts in bonuses and stipends,as well as an increase in the average retirement age by two years to 63.

“It’s a war against workers and we will answer with war, with constant struggles until this policy is overturned,” said Christos Katsiotis, a representative of a communist-party-affiliated labor union.

Giada Giani, an economist at Citigroup Global Markets in London, said, “The concern is whether the strike will be ... the first of a long series of street demonstrations involving other parts of the economy. We need to see a prolonged period of strikes before we know whether the government’s willingness will be affected.”

Adedy, the umbrella group representing about 600,000 civil servants, opposes Prime Minister George Papandreou’s program and plans to call out its workers again Feb. 24, when the biggest private-sector group, the General Confederation of Greek Workers, holds its own 24-hour strike.Wednesday’s walkout, with rallies in Athens and other cities and towns, is organized labor’s first major challenge since the Oct. 4 election of Papandreou, a socialist whom unions backed in the vote.

Despite the strikes, markets reacted positively to indications that wealthy European countries are closer to rescuing Greece. Stocks in Europe rose Wednesday for the second day on expectations of some kind of decisive action to prevent a Greek debt default that could spread to other EU countries.

European Union leaders are to discuss Greece’s economic woes during a summit today in Brussels. European Central Bank President Jean-Claude Trichet is making a rare appearance at the summit, which the markets saw as confirmation that some kind of help for Greece would be discussed.

The unions are contesting measures demanded by the EU and investors to reduce a deficit amounting to 12.7 percent of Greece’s gross domestic product last year to within the EU’s 3 percent limit in 2012. Greece’s fiscal woes have stoked concerns that it may need a bailout and helped spark a rout in global stocks.

Spain and Portugal, also suffering from gaping deficits after the worst recession since World War II, have been sucked into a market sell-off that has seen the euro fall to a nine-month low against the dollar on concern that swelling shortfalls will stifle Europe’s recovery.

Bond market fears of default appeared to recede, judging by the shrinking interest rate spread between 10-year Greek government bonds and benchmark German bonds. The spread, or difference, stood at 2.83 percentage points, down from about 3.20 percentage points late Tuesday and from 3.5 percent last week.

Papandreou declared that the austerity program would go forward “in every measure.”

Greece has come under intense pressure from its European Union partners to cut spending after it revealed a previously undeclared budget shortfall last year that continues to rattle financial markets and the euro, the currency shared by 16 EU members.

Papandreou, who was in Paris on Wednesday to discuss the economic crisis with French President Nicolas Sarkozy, has repeatedly said Greece will sink under its debt unless everyone contributes to a solution.

“We are absolutely decided that the stability program will be implemented in every measure,” Papandreou said after meeting with Sarkozy. “We are ready to take any necessary measures to make sure the deficit goal is met.”

He also announced plans to force all Greek businesses - including gas stations, cabdrivers and vendors at farmers markets - to issue receipts to fight Greeks’ notoriously lax compliance in paying taxes. The average retirement age will also increase to 63 by 2015.

Information for this article was contributed by Derek Gatopoulos, Costas Kantouris and Angela Charlton of The Associated Press; and by Natalie Weeks and Maria Petrakis of Bloomberg News.