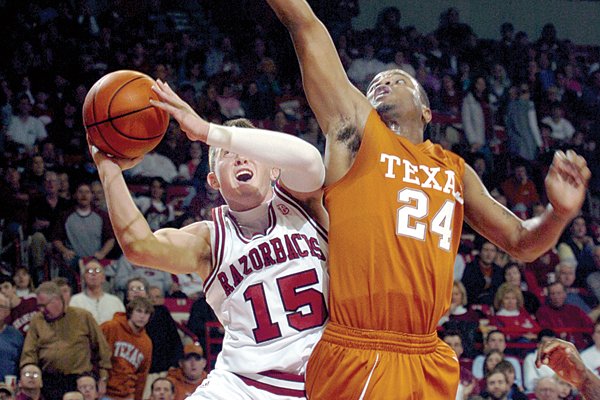 Arkansas guard Rotnei Clarke (15) is fouled by Texas defender Justin Mason as he drives to the basket in the first half Tuesday night in Fayetteville. Clarke led the Razorbacks with 24 points, but could not overcome the Longhorns in a 96-85 loss.

FAYETTEVILLE — Courtney Fortson came back against Texas on Tuesday night.

Arkansas couldn’t quite do the same.

The No. 2 Longhorns held off a late Razorbacks rally to take a 96-85 victory at Walton Arena before an announced crowd of 12,865 in the 151st meeting of the former Southwest Conference rivals.

Fortson, the Razorbacks’ sophomore point guard, played for the first time this season after missing the first 14 games because of an undisclosed violation of team rules.

Fortson, whose return was announced by Arkansas 90 minutes before tipoff, started and had 19 points and seven assists.

“Having him on the floor, just knowing he’s going to be playing for us, gets everybody in another gear,” said sophomore guard Rotnei Clarke, who led the Razorbacks with 24 points. “It’s really good to have him back playing with us.”

Fortson helped Arkansas (7-8) challenge Texas (14-0) and fight back from an 11-point deficit, but Longhorns senior forward Damion James made game-winning plays in the clutch.

Limited to 17 minutes because of foul problems, James still scored 20 points, including two jumpers in the final 2:10 to help Texas maintain its lead after Arkansas twice closed within two points.

“He made some big-time shots, flashing against the zone, catching and turning,” Razorbacks Coach John Pelphrey said. “That’s not an easy shot, but he made it look very easy.

“That’s what big-time players do, step up when they’re needed.”

James then hit two free throws with 40.4 seconds left to push Texas’ lead to 92-85 and finish off the Razorbacks.

“That’s the worst feeling, to be on the bench and watch your team play,” James said of being saddled with four fouls. “I’m the leader of this team, and I expect myself to be out there. But I had a couple tough calls, and I just had to stay focused.

Texas senior center Dexter Pittman, 6-10 and 290 pounds, had 21 points and 10 rebounds, including 8 offensive rebounds to help the Longhorns outscore the Razorbacks 21-11 on second chance points.

“It was like a little point guard trying to guard Shaq. Impossible,” said Arkansas freshman forward Marshawn Powell, who had 18 points, 6 rebounds and 4 steals. “He’s like super strong and has a shooting touch around the basket a guard would have.

“We just tried to defend him as best as we could.”

With James forced to sit much of the game, Texas junior forward Gary Johnson had 16 points and seven rebounds off the bench.

“We’ll take that every night,” James said. “I hope I don’t get in foul trouble every night, but Gary did great. He deserved the game ball the way he kept us in the game.”

The Longhorns found the Walton Arena baskets much more to their liking than a year ago, when they shot 34.8 percent (24 of 69) from the field as the Razorbacks won 67-61.

“They’re the best team in the country,” Clarke said. “They’re tough to stop, especially when you have a force down there like Dexter Pittman. As strong as he is, he can get a bucket almost any time he wants. He’s a big load, and they’ve also got other guys to surround him.

The score was tied 48-48 at halftime after 12 lead changes and nine ties, but Arkansas never led in the second half.

While Arkansas pulled within a basket three times in the second half, the Razorbacks never had the ball with a chance to tie or take the lead.

“We can play better, but give Arkansas credit,” Texas Coach Rick Barnes said.

“All that .500 stuff, it don’t matter because with us being Texas, we’re going to get everybody’s best shot,” James said. “They came out and played great with the home crowd behind them. It was a great road win for us.”

For the Razorbacks, it was another tough home loss as they fell to 7-5 at Walton Arena.

“I knew we would. We have all the way along.”