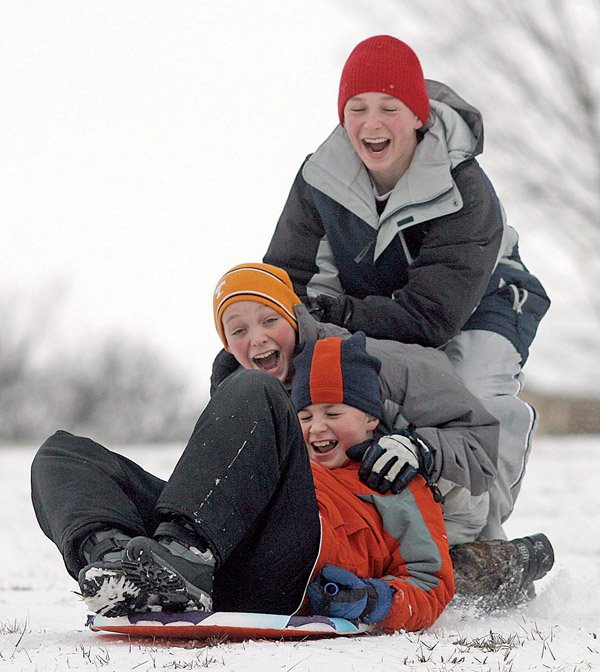 Zac Griffin (from front), 12, Matthew Crenshaw, 12, and his brother Josh Crenshaw, 14, sled down a hill Wednesday in Bentonville. Northwest Arkansas, blanketed by snow earlier in the week, was expected to get another 1 to 3 inches Wednesday night as bitter arctic cold moved into the state.

LITTLE ROCK — As night fell Wednesday, people across Arkansas braced for a round of uncommonly frigid weather expected to consume most of the state today.

In advance of the arctic front moving through, Gov. Mike Beebe declared a “state of emergency” Wednesday afternoon.

“While winter precipitation is predicted for tonight, the extreme temperatures and strong winds forecast in the coming days may create the bigger risk for emergencies,” Beebe said.

“Hopefully we won’t need these emergency provisions, but we want to stay one step ahead of these conditions and the dangers they could present our people.”

Declaring a state of emergency frees up about $50,000 for the Arkansas Department of Emergency Management to augment resources for cities and counties across Arkansas that might need shelters, said David Maxwell, the agency’s director.

Maxwell said emergency officials are more concerned about the extremely cold temperatures than the possibility of ice, but the agency is preparing for both.

“Weather prediction is not a perfect science,” he said Wednesday afternoon. “We’d like to get as much in place as we can today just in case things get worse.

“With the brutal cold they’re forecasting, we just want to make sure we’re able to support [shelter efforts by] local officials.”

Emergency officials already activated a few Arkansas National Guard soldiers to help move supplies to local armories that might be used for shelters if the weather causes widespread power failures.

The persistent arctic chill gripped much of the country Wednesday and is blamed for at least nine deaths in Arkansas, Tennessee, Maine, Wisconsin and Mississippi. Some of the deaths were caused by hypothermia, and others were car, plane or sledding accidents.

“This air mass originated on the ice cap at the top of the world,” said Bobby Boyd, a weather service forecaster in Nashville, Tenn. He said the cold shot wouldn’t be spent until it plunged southeastward and moved well beyond Cuba into the Caribbean.

Despite the lingering cold, searchers in Maine and Arkansas are separately looking for two teenagers - an 18-year-old snowmobiler who was last seen near China Lake, Maine, and a 19-year old whose vehicle got stuck on a flooded road in Ashley County. Each disappeared on New Year’s Day.

The National Weather Service is predicting up to an inch of snow in central Arkansas, and an additional inch or 2 farther north. Freezing rain, sleet and some icy roads also are expected for parts of the state through today.

As the precipitation moves out, single-digit temperatures will move in, said Lance Pyle, a meteorologist with the National Weather Service in North Little Rock.

The northern part of the state is expected to experience colder weather with a low of zero degrees in Fayetteville tonight and wind chills of minus 17.

Even south Arkansas is forecast to see single-digit temperatures of about 9 degrees by Friday night.

With sustained temperatures that low, Little Rock officials opened a special warming shelter at the Nathaniel Hill Community Complex at 2500 E. Sixth St. The shelter will operate through the weekend.

“We’ll have people going by the places where people usually camp, try to get them in where it’s warm,” he said. “Anybody who wants our help, we’re happy to give it.”

During the extreme cold, Hays said, anyone in North Little Rock can call the 911 emergency number to get assistance as well.

“We can’t force people to go inside, but we will strongly encourage them by offering transport,” the mayor said. “If they desire a blanket or any kind of assistance we think can be helpful in this frigid weather we’re about to face, we are certainly prepared to offer that assistance.”

A warm-up isn’t expected until Sunday, but forecasters say it still will be colder than usual for this time of year.

The news sent people across Arkansas scrambling for last-minute supplies.

A woman answering the phone at a Batesville propane dealership laughed loudly when asked whether an influx of people have sought to stock up on propane, which many use for heating homes.

“We’re pretty swamped,” said the woman, who declined to give her name. “Once it starts really turning cold, we get pretty busy. This is the way it is all winter.”

The same went for grocery stores, as shoppers crammed into crowded parking lots for extra food.

“We’ve had quite a few people coming in,” said Tammy Vaughn, owner of the Penny Pincher grocery store in Mena. “They’re buying the necessities like milks and breads.”

Vaughn said they seem most concerned about losing power as the mercury plummets as low in some parts as it has been in more than a decade.

Representatives from electric companies that provide service to Arkansans said Wednesday that they are as ready as they can be for a “worst-case scenario,” such as the ice storms that crippled the northern third of Arkansas last January and knocked out power to nearly 400,000people.

“We’re prepared. Basically, you develop a plan you hope you never have to use,” said Mike Russ, general manager of North Little Rock Electric. “There’s really nothing more for us to do other than wait and see.”

Like other electric companies, Russ said his employees have been trimming limbs next to utility lines and poles all year long to try to minimize any issues from falling limbs - ice-covered or otherwise.

Though the National Weather Service isn’t predicting an “ice event,” Entergy Arkansas spokesman James Thompson said there is a possibility of power failures.

For one, Thompson said, hazardous road conditions may cause accidents in which drivers hit power poles. The cold also could cause problems with equipment.

In addition, extremely low temperatures cause residents to bump up their thermostats or increase the number of heaters they use. The increased stress on the electricity delivery system increases the potential for isolated failures of transformers and other electrical equipment, Thompson said.

He urged Arkansans to keep warm but to remember that for every degree above 68 they go on their thermostats, their bill increases about 3 percent.

“We’re hoping this is strictly just a winter event, but it is unusual,” Thompson said. “It’s just hard to imagine Arkansas having these kinds of temperatures.”

With extended periods of below-freezing temperatures and winter precipitation, there is concern that there will be some ice on roadways.

“We’re in waiting mode right now,” Sadler said. “We’re preparing for the worst, knowing the odds are, somewhere in the state - we don’t know where yet - there could very well be a worse-case scenario.”

Arkansas Highway and Transportation Department spokesman Glenn Bolick said crews are on standby to salt and sand highways and bridges.

“Statewide, we’re ready to do whatever we need to do,” Bolick said.

Information for this article was contributed by Bill Bowden, Jacob Quinn Sanders, Jake Sandlin and Mike Linn of the Arkansas Democrat-Gazette; and by Randall Dickerson of The Associated Press.

In the event of electric power failures, customers who have

service through one of 17 electric cooperatives in Arkansas, should contact their local provider. Other large power