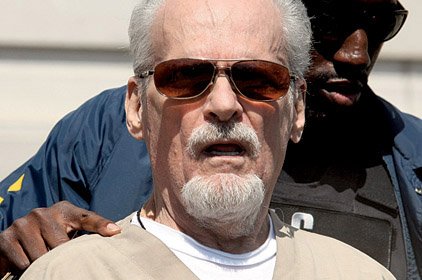 TEXARKANA — Five women who say they were taken as “wives” by evangelist Tony Alamo when they were young girls and sexually abused were awarded $500,000 each in restitution on Wednesday. The amount is less than one-fifth of what a government expert had recommended.

The restitution, meant to compensate the women for the mental and psychological damage caused by Alamo’s abuse, was the final part of the preacher’s sentence for his conviction on charges of transporting underage girls across state lines for sex in violation of the federal Mann Act.

U.S. District Judge Harry F. Barnes set the amount of restitution at a hearing in U.S. District Court in Texarkana after listening to forensic and developmental pediatrician Sharon Cooper of Fayetteville, N.C., testify that each victim likely would incur $2.7 million in expenses for treatment of medical and psychological problems caused by Alamo’s abuse.

Barnes agreed that the girls had suffered greatly but set the amount for each victim at $500,000. He didn’t give a reason for setting the amount below what Cooper had recommended.

“The defendant has truly,truly damaged these five young girls,” Barnes said. “I don’t think any amount of money that this court could order would replace what they’ve lost.”

A jury convicted Alamo in July of 10 counts of taking underage girls across state lines for sex. In November, Barnes sentenced Alamo to the maximum allowed on each count, for a total of 175 years in prison. He also fined Alamo $250,000.

After restitution was awarded Wednesday, Assistant U.S. Attorney Kyra Jenner said authorities would begin “working diligently to identify and seize assets so that these girls may receive the restitution that was ordered here today.” She said she was confident the ministry had sufficient assets to cover the $2.5 million awarded.

“The challenge is going to be uncovering them [assets] and finding what names they have been placed under,” Jenner said, referring to the ministry’s practice of placing ownership of each piece of property in the names of several church members, rather than with Alamo or the church itself.

At a hearing in October 2008, FBI agent Randall Harris testified that Alamo controls a “rather vast organization” with businesses and property in southwest Arkansas, Oklahoma, California and New Jersey. While the businesses and property are all registered in the names of followers, “hardly a penny is spent” without Alamo’s approval, Harris said.

Alamo’s lead defense attorney, Don Ervin of Houston, said Alamo would appeal the restitution amount along with his conviction and prison sentence.

“I’m not happy he’s having to pay any amount at all because he’s innocent,” Ervin said.

Alamo, 75, the leader of a ministry known for its apocalyptic religious pamphlets left on car windshields across the country, was arrested in September 2008, five days after a raid by more than 100 federal and state police officers on the ministry’s compound in Fouke, about 15 miles south of Texarkana.

At the trial in July 2009, Alamo’s accusers, now ages 18 to 31, testified that Alamo had taken them as his “wives” at ages as young as 8, sexually abused them and kept them under his strict control at his house at the compound. The counts in the indictment referred to trips Alamo took the girls on from March 1994 through October 2005.

All five victims attended the restitution hearing Wednesday, as did three women whom authorities have identified as Alamo’s current “wives,” as well as residents of Fouke and former members of the ministry. Alamo, wearing an olive jail uniform and thick glasses, leaned back in his chair, often scoffing or sneering as Cooper testified.

Cooper, the author of a two-volume textbook on child sexual exploitation, noted that the victims were kept imprisoned and were educationally neglected in Alamo’s house and they considered him an authority figure, all of which made the abuse “much worse” than in a typical child sexual-abuse case.At least some of the women have chronic back and cervical pain, which Cooper attributed to having to massage Alamo’s body and feet “all through the night, many times for eight or nine hours at a time.”

One victim had a finger broken by Alamo that was taped up but never treated properly, Cooper said. Another has neck pain from “severe injuries” she suffered in a car accident while she was under Alamo’s control, Cooper said. After the accident, the victim was awarded $6,000 in a settlement and was prescribed six months of physical therapy and chiropractic care. But, Cooper said, Alamo pocketed most of the settlement money, only allowing the victim to attend two chiropractic appointments.

Among the other ailments Cooper diagnosed in the victims were post-traumatic stress disorder, severe menstrual cramps, depression and vision problems that she said could be the result of being punched repeatedly in the face.

She estimated that each woman would incur $1.8 million in medical expenses over her lifetime as a result of the abuse inflicted by Alamo. She also estimated each woman would have about $800,000 in abuse-related mental-health expenses and $80,000 in expenses for diagnostic tests.

“I believe these young women will struggle mightily,” Cooper said.

Ervin objected to Cooper’s report as “speculative,” and he questioned her about how she could prove that Alamo was the cause of the women’s health problems. He also quoted some of the women as testifying at Alamo’s sentencing hearing in November that they had moved on with their lives.

“I have amounted to beyond what I ever thought I could. I have a good job. I have my own car, my own little apartment, all of which I got on my own,” Ervin quoted one of the victims as saying.

At the request of Alamo’s attorneys, references to religion were redacted from Cooper’s report. However, in announcing the restitution, Barnes said one of the greatest losses suffered by the women is likely their “childlike faith in their creator.”

Barnes also said he was “impressed with the resolve and the desire” of each of the victims “to succeed in life and be productive as a citizen and a mother and a wife.”

Thomas J. Browne, special agent in charge of the FBI’s Little Rock office, said in a statement that the FBI was “pleased to see that the courageous victims in this case will receive the financial assistance to which they are legally entitled.”

Deborah Groom, U.S. attorney for the Western District of Arkansas, added that her office will “take all necessary steps” to ensure the victims receive the restitution Barnes ordered.

FBI agent Harris said the victims did not want to comment on the restitution award.

With the restitution amount set, Jenner, the assistant U.S. attorney, said, she expected Alamo to be transferred to the federal prison system within a week.

As he was escorted to a car that would take him to the Bowie County Correctional Center in Texarkana, Texas, Alamo blamed the restitution award on “the government effort to put away Christianity.”

Asked if he would be able to pay the restitution, he said, “I ain’t got no money. I’m broke.”