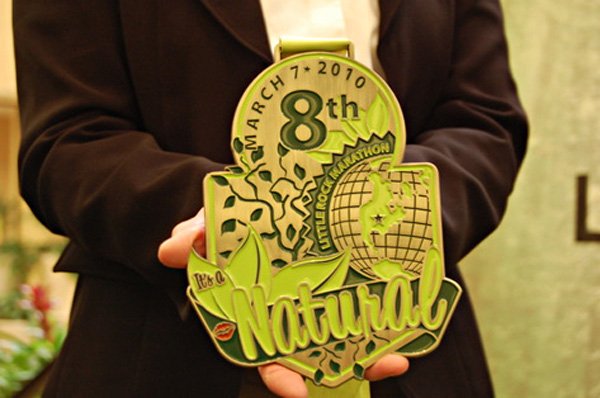 The Little Rock Marathon will be held March 5 – 7 in downtown Little Rock.

“When we started the Little Rock Marathon we had no idea the medal would be what we are known for,” Pharis said.

“Our race is known for coming up with something fun and different each year,” Pharis said. “Athletes come from around the world to take our medal home. Only a few take away the winner’s title. But, when all said and done the one thing so many finishers cherish is their medal. They run for the hardware and every finisher takes home hardware.”

The half marathon finisher’s medal also features the 2010 race theme and is 4 inches long by 4 inches wide.

Race day is Sunday, March 7. In addition to the marathon (26.2 miles), there is a half marathon (13.1 miles) race, presented by Baptist Health; a 4 person relay marathon (26.2 miles divided into four segments) and the Classic Rockers Final Mile (for individuals 55+ who completed at least 25.2 miles prior to race day).

The Little Rock 5K Fun Run/Walk, presented by Windstream Communications, is Saturday, March 6 at 8 am. The Little Rockers Kids Marathon (26.2 miles completed over an extended time frame), presented by Arkansas Children’s Hospital and Today’s THV, for children 7 to 12 is Saturday, March 6 at noon. All races start at the River Market and finish at the Riverfest Amphitheatre.